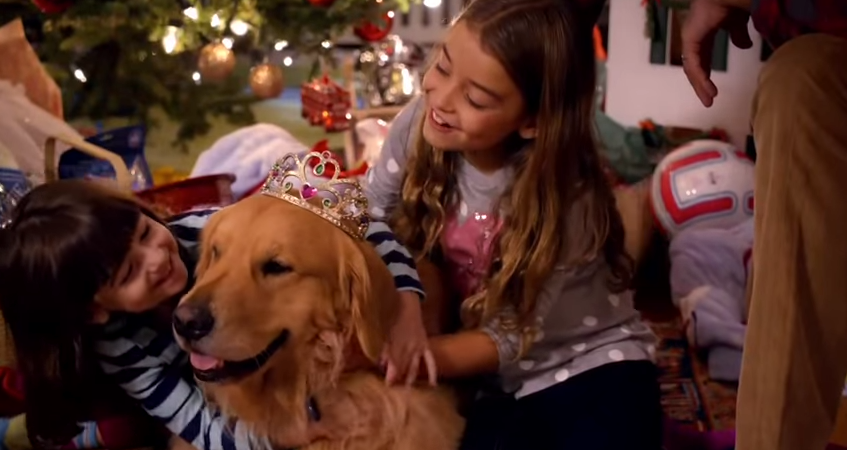 The holiday season has long been known for its philanthropic advertising; it’s the perfect time of year for brands to communicate to the public what they are doing to give back to the greater good. Last year, the highest scoring holiday ad was Walmart’s “Christmas Magic,” which was an emotionally-stirring spot emphasizing the big retailer’s partnership with the Salvation Army. The ad earned an impressive Ace Score of 687 with an Emotional Sentiment score of 71. While this particular ad’s scores are noteworthy, they’re not too surprising. Over the past three holidays, philanthropic ads have consistently performed better than other holiday ads. In fact, on average, philanthropic holiday ads have an Ace Score 13% higher than the average holiday ad (and holiday ads perform just about as well as other, non-holiday ads, on average). 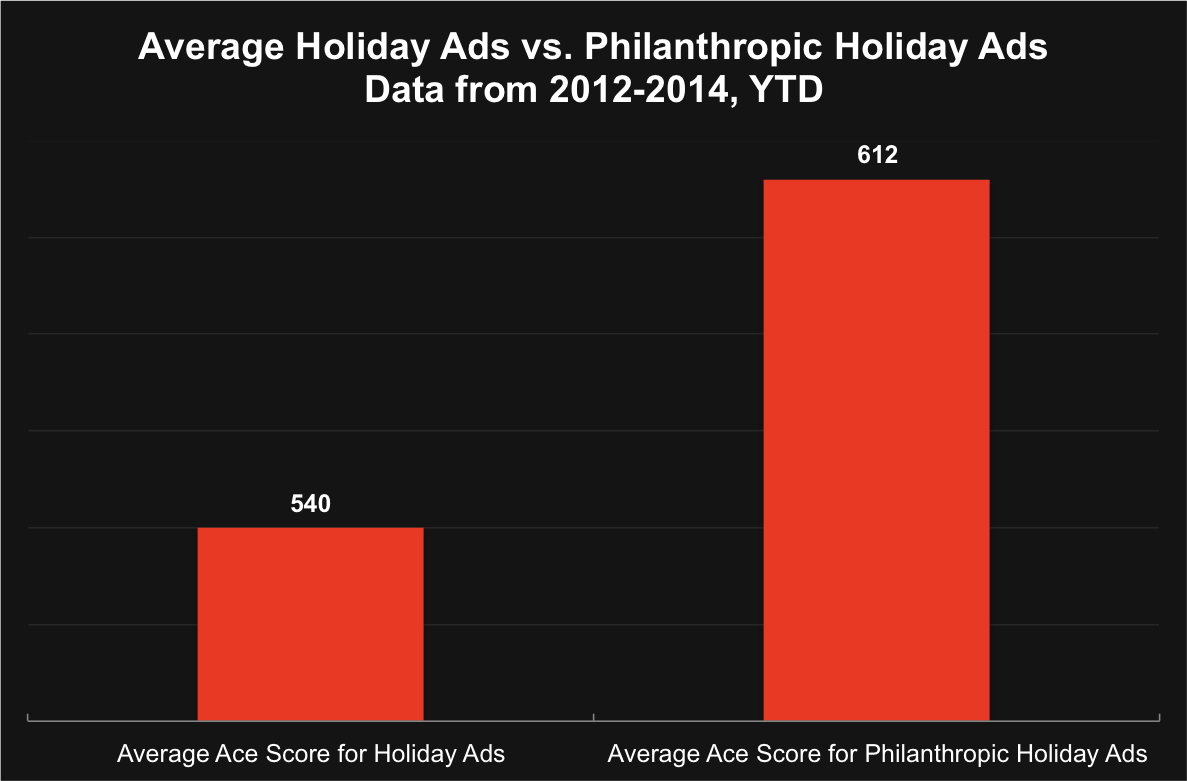 This year’s bighearted ads are no different, averaging an Ace Score of 609. While we haven’t seen any philanthropic ads from Walmart yet this year, four brands have aired five separate spots so far. Duracell is also noticeably absent from our list. The battery brand is well known for its Toys For Tots partnership, airing a new holiday ad nearly every year with last year’s ad earning the third highest score of the season. While we await their 30-second heartwarming story, here are four brands that are doing well with their do-gooder ads this holiday.

Of the five philanthropic ads that have aired so far this year, Mazda has aired two of them, reinforcing its tagline, “Because Doing Good is the Mazda Way.” Not only has the big-hearted car brand aired two ads, but it also has the highest rated 2014 philanthropic holiday ad, “Braeden’s Story.”

The ad’s heartwarming story earned it exceptionally high scores across Likeability, Information and Attention, with each component scoring well above 700. Likewise, many consumers also found this ad relevant, awarding it a Relevance score 25% above the Non-Luxury Auto 90-day norm.

Pulling at heartstrings, the Emotional Sentiment score for the ad came in 47% above the database norm. The Emotional Sentiment score is created by analyzing consumers’ optional feedback for the advertiser. Among the 364 comments consumers left for Mazda’s ad, people overwhelming used positive words like “heartwarming,” “inspiring,” “touching,” “love,” “wonderful” and “giving.” Four percent of consumers even mentioned how “young” Braeden is for doing such an amazing thing.

Mazda’s other giving-focused ad, “The Mazda Way,” also talks about how Mazda is giving back this holiday season when people either test-drive or buy a new Mazda. The ad earned an overall Ace Score of 605, which is 13% higher than the average 2014 holiday ad.

Not surprisingly, 33% of consumers found the ad’s message to be the best thing about “The Mazda Way. 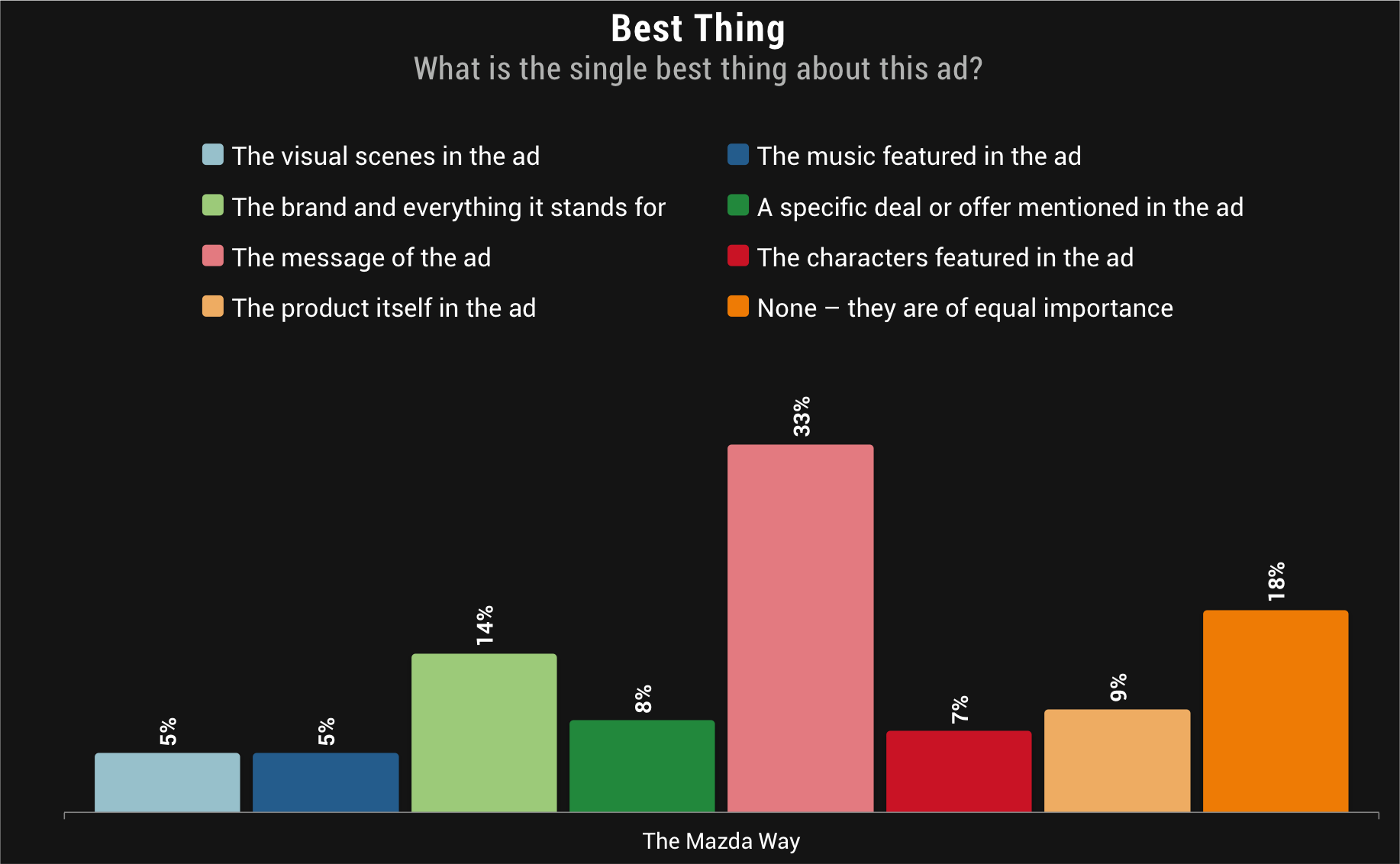 Notably, this is not Mazda’s first charitable ad. Last year, Mazda also focused on its partnership with St. Jude’s Hospital in its 2013 holiday ad “Giving Back.”

Much like Mazda, the non-luxury car brand Subaru is no stranger to opening up its heart around the holidays. Subaru’s latest holiday, philanthropic ad, “How It Feels,” touts its “Share The Love” event, giving $250 to a charity of your choice when you take home a new Subaru this season.

Consumers awarded “How It Feels” an Ace Score of 623, which is 17% higher than the average 2014 holiday ad. Impressively, over 402 consumers of the 500 that were surveyed felt compelled to leave feedback about this ad. Eleven percent of consumers used the word “great” while 6% said “love” and 10% mentioned how “nice” it was of Subaru. 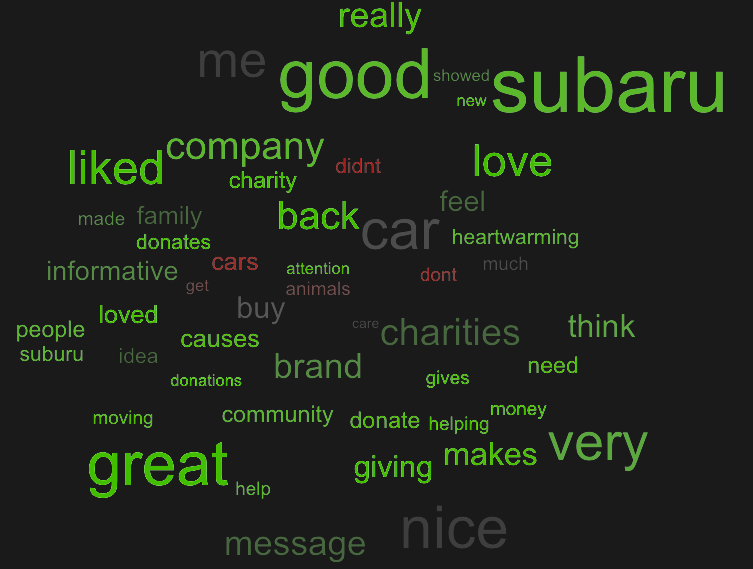 A newcomer to philanthropic holiday ads, pet food brand Blue Buffalo partnered with Home 4 The Holidays to raise awareness for our orphaned furry friends. The 30-second spot, “Christmas With Four-Legged Family,” asks consumers to remember the loving, furrier members of our families this holiday season and consider adopting a new pet.

Consumers were touched by the ad’s message, awarding it an Emotional Sentiment score 38% above the average ad. About 8% of consumers talked about either “adopting” or getting to “adopt” an animal. 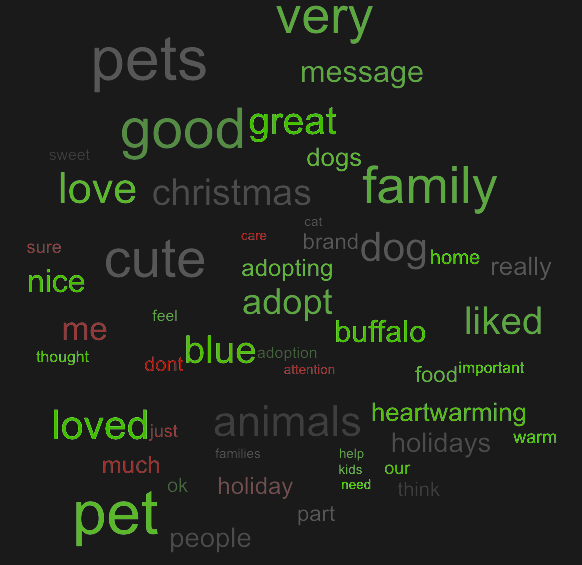 Consumers with pets were especially loving towards Blue Buffalo’s ad, with cat owners awarding the ad an Ace Score of 667, 12% above the ad’s overall Ace Score. 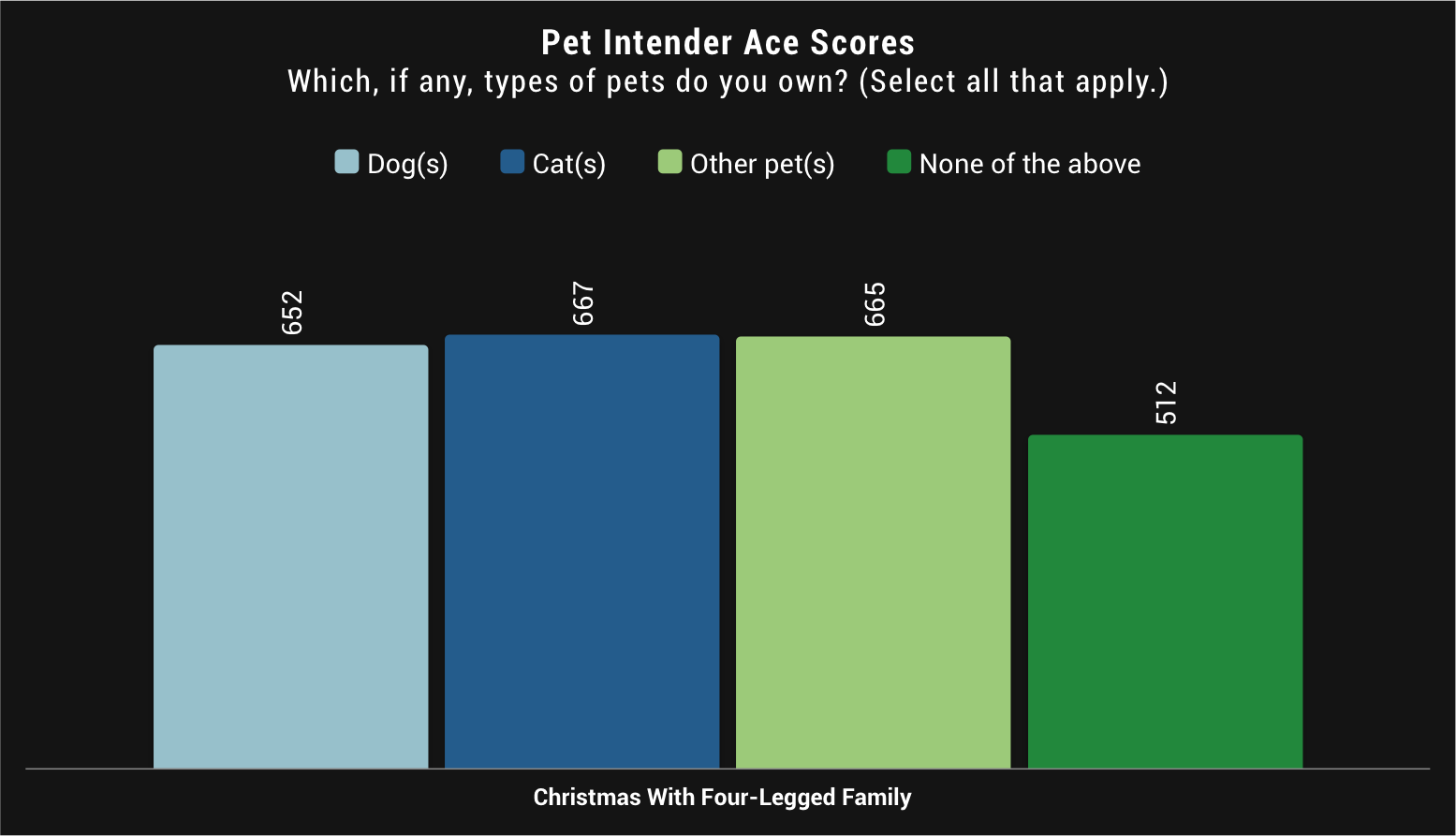 Target has been on quite the holiday advertising escapade this season, airing 13 new holiday ads already. However, its very first holiday ad of the year had a bit of a different tone than the rest of its seasonal spots. “Together” debuted on November 3rd. The animated ad focuses on Target’s partnership with Toms, giving back for every pair of the trendy shoe sold at the big, red retailer. 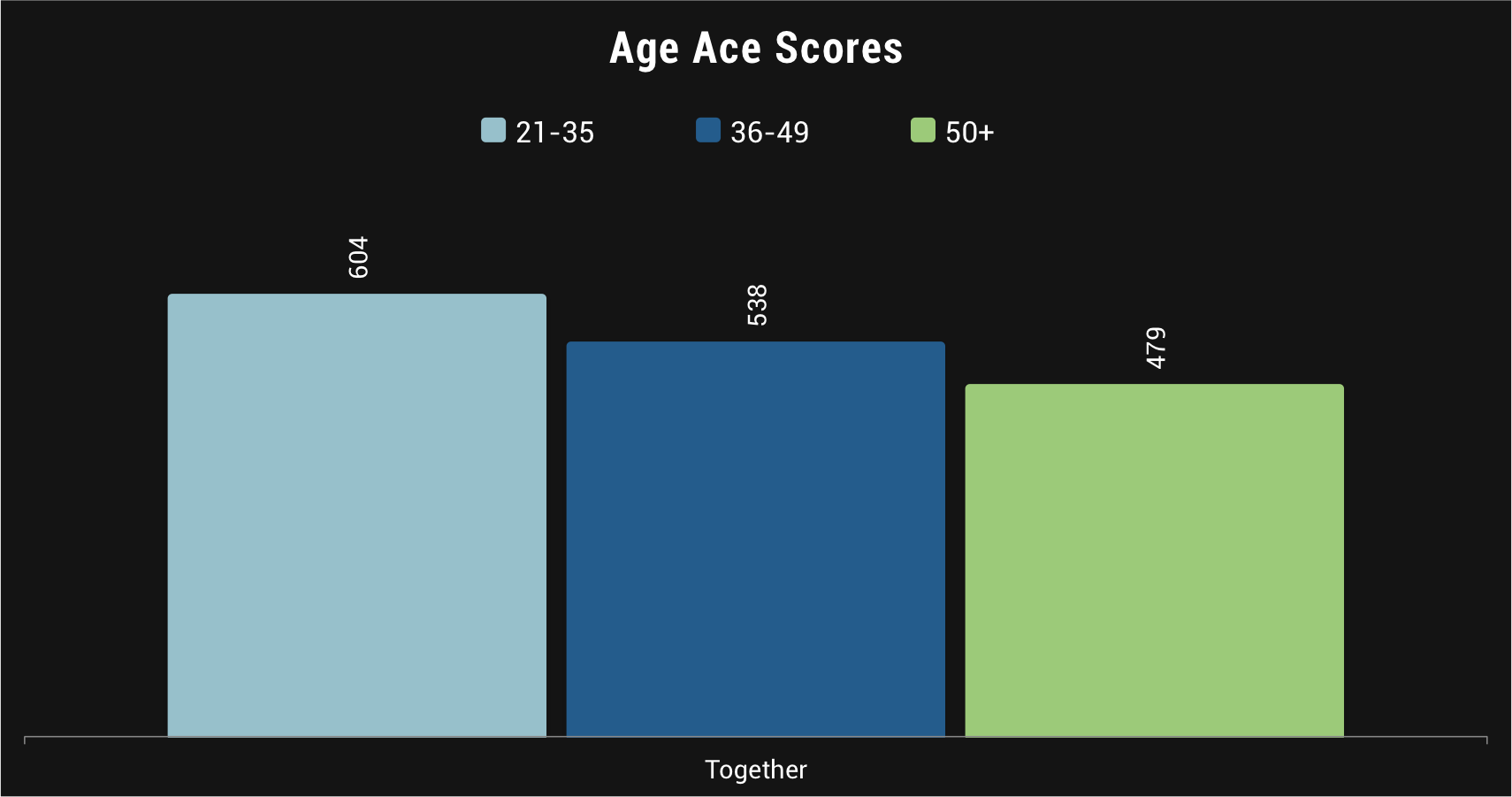 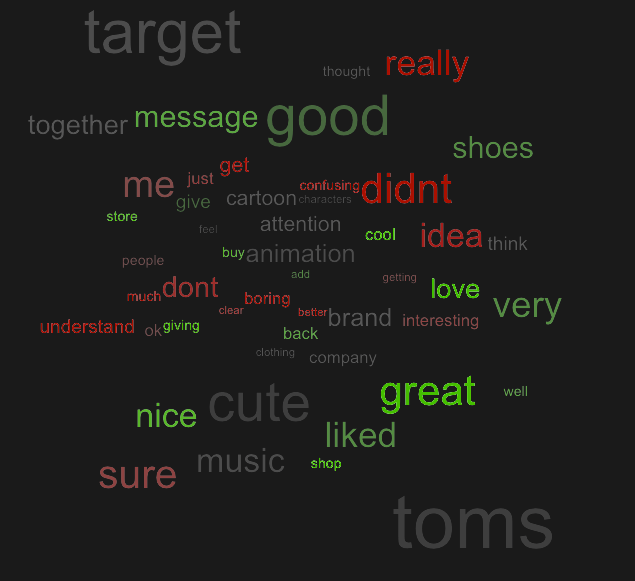 Either way, like most presents, it’s really the thought that counts when it comes to philanthropic ads. While the high scores are a nice bonus, it’s good to see advertisers give back during this special time of year.

Interested in some tips and tricks for making an especially stellar philanthropic ad? Contact us for an inside-the-stocking view.