The YouTube Leaderboard consists of the ten most popular paid ads uploaded during the prior month. YouTube views are inherently self selected – meaning those people chose to watch it. To be among the top ten of all ads viewed online in a month is a great achievement and speaks to the ability for that ad to resonate with a particular audience. 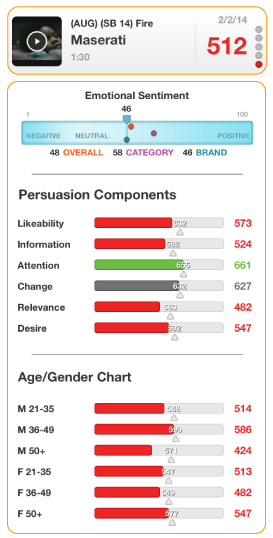 Maserati generated a lot of buzz in our Super Bowl war room on game day – a surprise advertiser and an ad that had us guessing who it was until the very end. That sentiment was also found in the scores among the respondents. We had 500+ people score the ad as soon as it broke with an augmented sample of high-income auto-intenders (customary for the luxury automotive category). While Attention and Change scores were high (661, 627), the ad suffered in terms of Information (524) and Relevance (482). But clearly, following the big game, more than 12 million people found and watched the ad online – and we’re guessing we know who.

The ad found a single audience in males 36-49 who scored it 3.5% above the category norm (586) but not quite above the norm for the age group (599). The rest of the age/gender demographics scored well below the Luxury Automotive norm and their respective demographic norms.

Eight percent of the 298 verbatims collected included the word “long,” 5% mentioned the “message” or “story” and 5% referenced “movie” – as many felt the ad was artfully created and acknowledged the beauty of the car, the visuals and the positive message. Others were quite confused about what the ad was for – but still 5% mentioned Maserati by name (a difficult one to spell for many for sure).

This is a great example of a strong ad that is best suited for targeted viewership. The Super Bowl is one of the largest and most diverse viewing platforms advertisers have. So for an ad this narrowly targeted (or narrowly appealing), the $10 million+ media dollars may have found more appropriate television inventory. 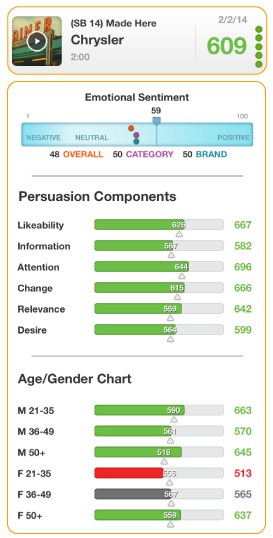 As usual, Chrysler held its Super Bowl ad until game day. With much speculation about the inclusion of Dylan and what this year’s plea might be, the two-minute ad generated enough views to earn it the second highest spot for February. America was a central theme of the Super Bowl and this ad was among the top performing, landing 17th on our Super Bowl list with an Ace Score of 609. The ad earned a strong Attention score of 696 with 19% of the 363 respondents using the word “American.” “Dylan” earned 10% billing while 16% called the ad “long.”

The ad performed best with men ages 21-35 and 50+. Mature women scored the ad high as well (637). The Chrysler brand already earns a strong Emotional Sentiment Index, averaging 50, and this ad earns a lofty 59. 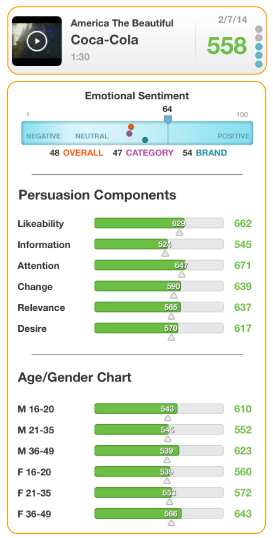 The controversy surrounding this Coca-Cola ad certainly contributed to the nearly 11 million views that earned it the third spot on February’s list. And while the ad scored above average with people of all ages, the controversy can also be clearly seen in the verbatims – something that could have provided warning to Coca-Cola as they prepared for the violent viral social and media reaction. 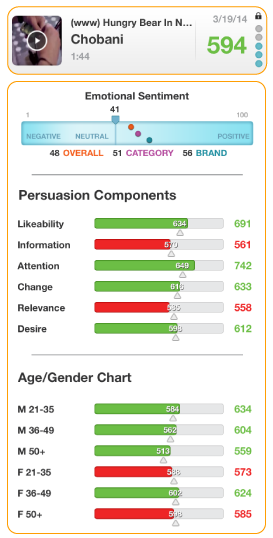 It’s no wonder this ad made the list for February with an authentic looking bear loose on the streets of New York City. The ad is a follow on to Chobani’s Super Bowl ad “Ransacked (Bear)” which scored considerably higher (614) and ranked 13th among the 53 game day ads. This time the brand designed a bear suit – rather than using the real thing thankfully, to walk the streets of NYC looking for something natural to eat. At 1:44 the ad succeeded in holding viewer attention with Attention scores soaring to 742 and Likeability approaching 700. Not unlike many of the other most viewed ads – the ad earned lower Relevance and Information scores. The ad had fairly broad appeal with men 21-35 scoring highest (634) followed by women 36-49 – but all age / demo breaks at or above the Dairy norm, save men 50+ who often score like a grizzly.

An outstanding 20% of the 320 responses used the word “funny” to describe the ad and 3% calling it “hilarious”. 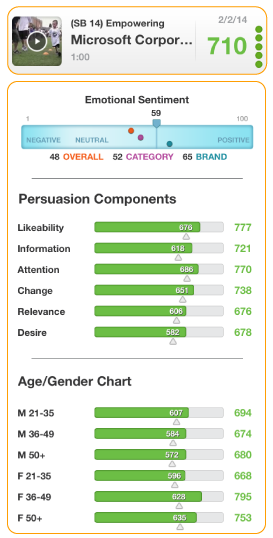 Microsoft’s “Empowering” earned our Top Ad of the 48th Super Bowl when it debuted on February 2nd, outperforming the #1 YouTube Ads Leaderboard ad for January, Budweiser’s “Puppy Love” by 29 points.

Microsoft’s touching ad used multiple elements to support one thing – its brands. It incorporates the Surface, Skype, Windows 8, Microsoft Hardware and Kinect, all of which work to empower people to accomplish things that were never thought possible. This single-focused and well-executed spot brought towering scores across multiple components, especially for Likeability, Information, Attention, Change and Desire. This is reaffirmed in the optional free responses consumers wrote after watching the ad. Twenty-four percent of responders mentioned the word “technology”. And, interestingly enough, after delving deeper into what else consumers mentioned when they talked about technology, it was “people,” which is really what this ad is all about – how technology helps people be better and do more. 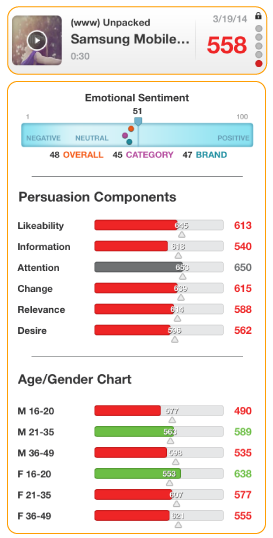 Samsung Mobile Phones closed 2013 with an average Ace Score of 558, down 3.1% from 2012’s 576. The tech giant often turns out a variety of approaches and “Unpacked” is a new one, spending the entire :30 flashing pictures and a couple of short video clips, all of which displayed stock-like photography. Earning nearly 3 million views in February, the ad lacked Information and struggled with Likeability – two components that stronger Samsung ads rarely miss hitting. The ad scored 5.7% below the 90-day Mobile Devices norm.

The ad found an audience with females 16-20, earning a 638 among this group. While the ad struggled with most component scores (Desire, Change, Relevance, Information, Likeability and Watchability) it did bring in a 650 (just shy of the 653 norm) for Attention and a strong 51 on the Emotional Sentiment Index, 10% above the average ESI for the brand.

Mining the 327 verbatim responses collected, we see that females 16-20 “love” the ad and the pretty pictures, while just about everyone else found it annoying, confusing, lacking inspiration and failed to see what the ad was for or about. This is a great example of an ad best suited for opt-in, online viewing by a narrow audience.

A Stand-out Ad Knows No Length