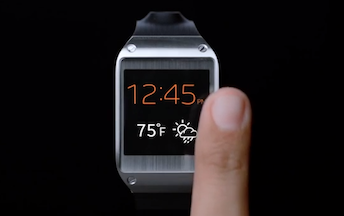 The YouTube Leaderboard consists of the ten most popular paid ads uploaded during the prior month. YouTube views are inherently self selected – meaning those people chose to watch it. To be among the top ten of all ads viewed online in a month is a great achievement and speaks to the ability for that ad to resonate with a particular audience.

No surprise here that the number one ad shared online is one of the Samsung Gear ads. We knew these were winners when they broke in the beginning of October. (See that write up for more details on how the ads performed.) Outstanding Attention and Change scores indicate that consumers are intrigued by this latest innovation; and the Relevance and Desire scores make us wonder if these won’t be topping Holiday wish lists, certainly among the 16–35-year-olds. It’s worth noting this #1 ranked ad earned 10 million more views than the #2 ranked ad. 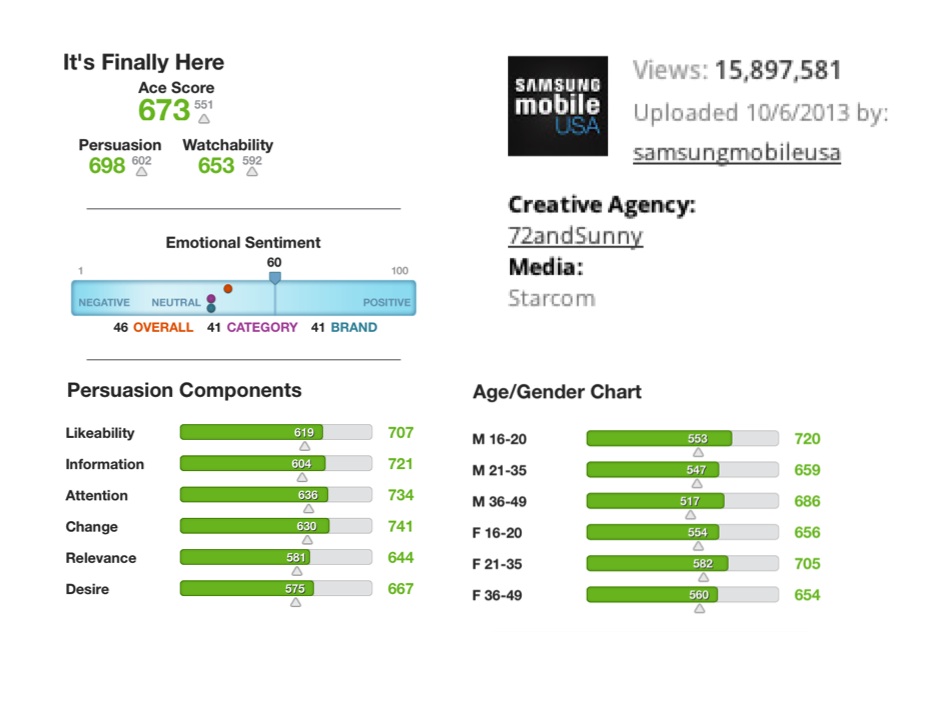 The competition is heating up among video games and consoles. Playstation bursts onto the scene with this introduction to the Playstation 4. Males 21–35 scored the ad 15% above the video game – hardware 90-day norm. The ad lacks a bit of Information as evidenced from a slightly below norm score of 534 but earns strong components otherwise. It is notable, and probably a little concerning, that Males 16–20 scored the ad below norm – something to keep an eye on. Finally, 54% of respondents own an Xbox and still scored the ad 8% above norm. 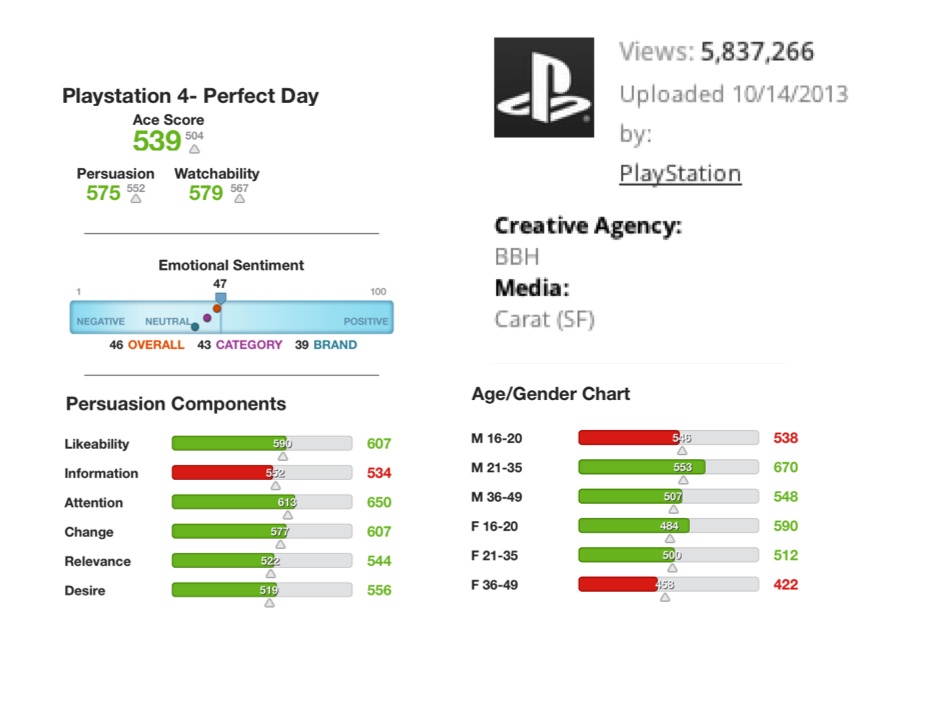 Crest serves up a crowd pleaser with their healthy Halloween treat focus group. The ad performs well with every age / gender break with Females 36–49 appreciating it most and even our grumpier old Males 50+ scored it 16% above the Personal Care norm. Crest may have missed an opportunity reserving this ad for online audiences given this is the 2nd highest scoring ad for the brand to date. 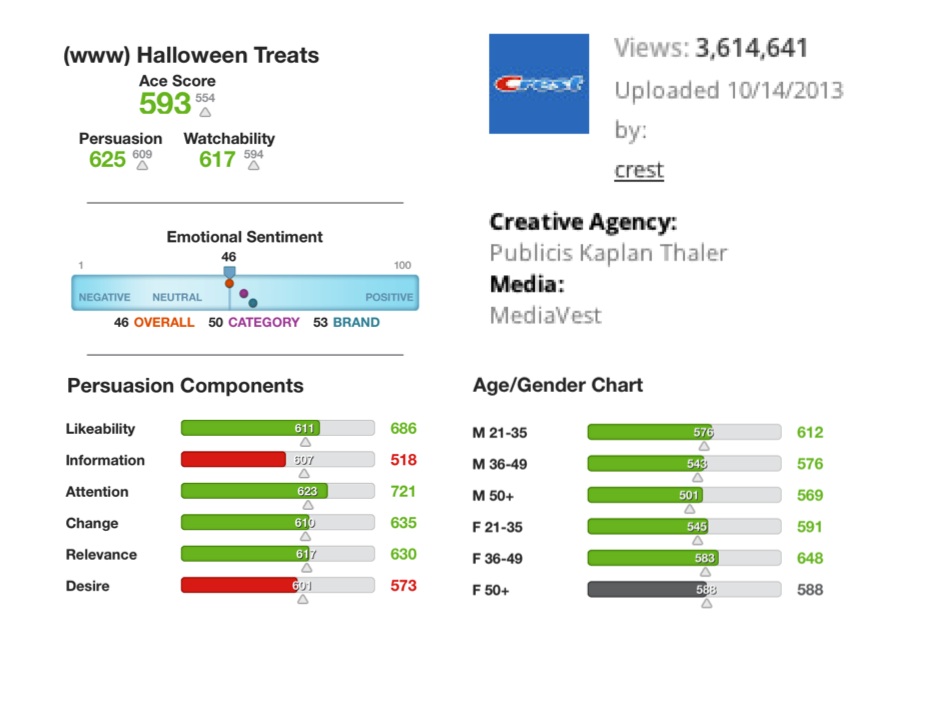 Samsung’s 2nd ad for the October list, Science Reality, also earned Ad of the Week when it broke earlier in the month. The ad performs well across all ages and breaks 700 among both girls and boys ages 21–35. 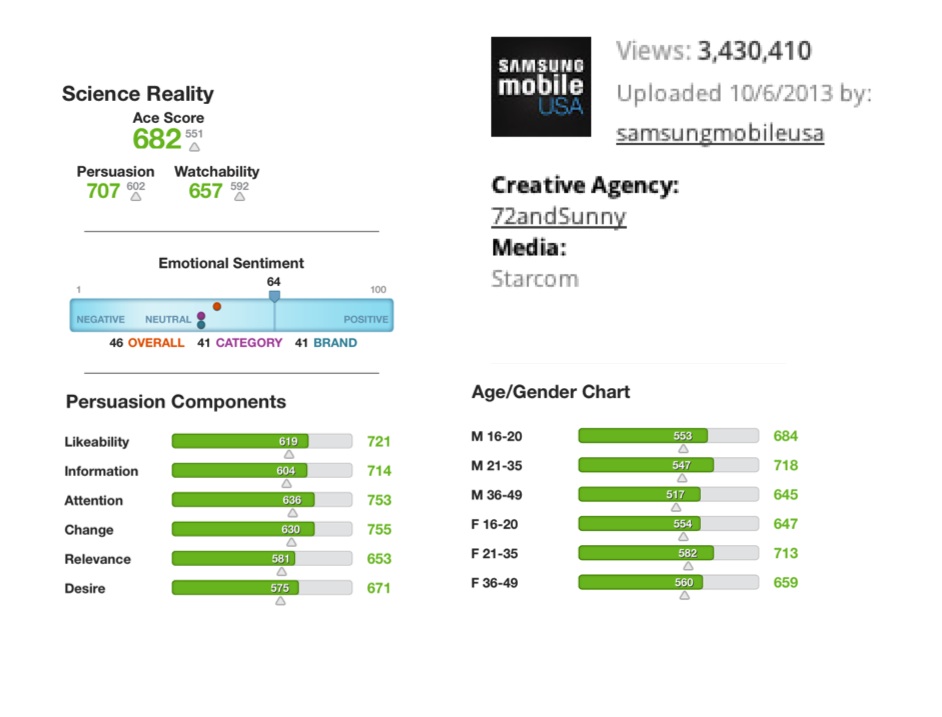 Xbox has dominated the video game console category with the top 6 highest scoring ads of the past year. This ad earned Ad of the Week when it broke on television at the end of October (followed closely by its :30 version) and was the first of two Ads of the Week for the Xbox in the last 3 weeks. The ads are appealing across age and gender – a stunning result for a game box (but is it not trying to be the everything in one box?). The ad skews younger and has a surprisingly high Emotional Sentiment score of 60 – 17 points above the category norm and 7 above the Xbox brand norm. 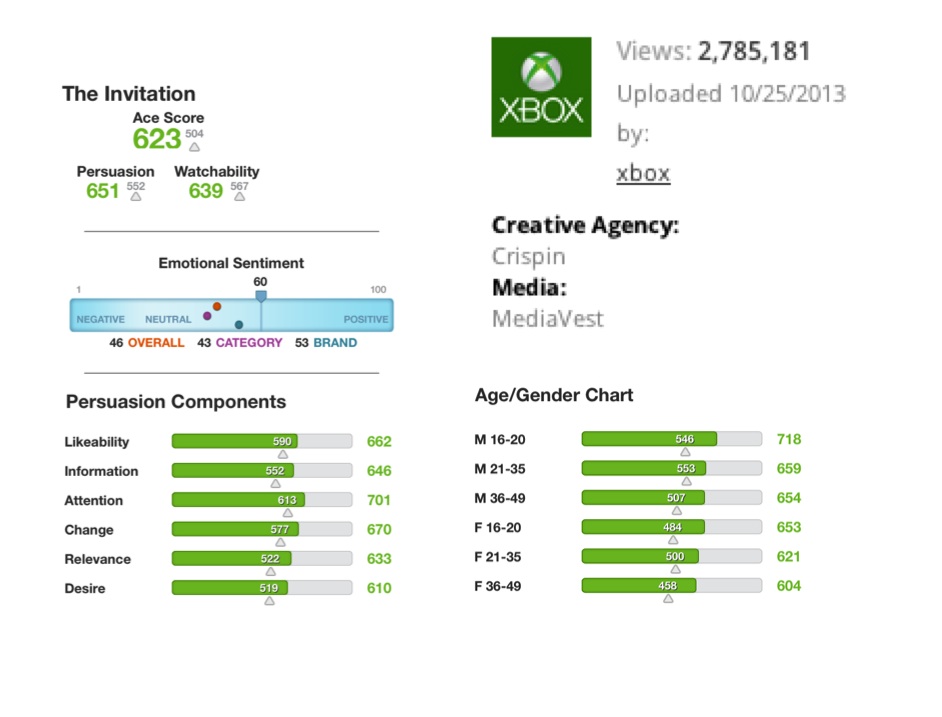 Of the five Dodge ads featuring Ron Burgundy, “Gumball Machine” is the only to perform within a point of the Non-Lux Automotive norm (the others all falling fairly short). The ad, like its creative brethren, appeals best to younger men (21–35) followed by men 36–49, likely just the audience Dodge is looking for. As is often the case with celebrity ads, Ron Burgundy and Will Ferrell prove to be highly polarizing with 19% of the 349 optional verbatim responses using the word “funny” and 6% using “stupid”. Nine percent of the respondents mention “Ferrell” (or another attempt at spelling) in a negative / low scoring response while 7% mention “Durango” positively. It seems while the character and actor cause a polarizing reaction among the general population, many appreciated the unconventional approach. 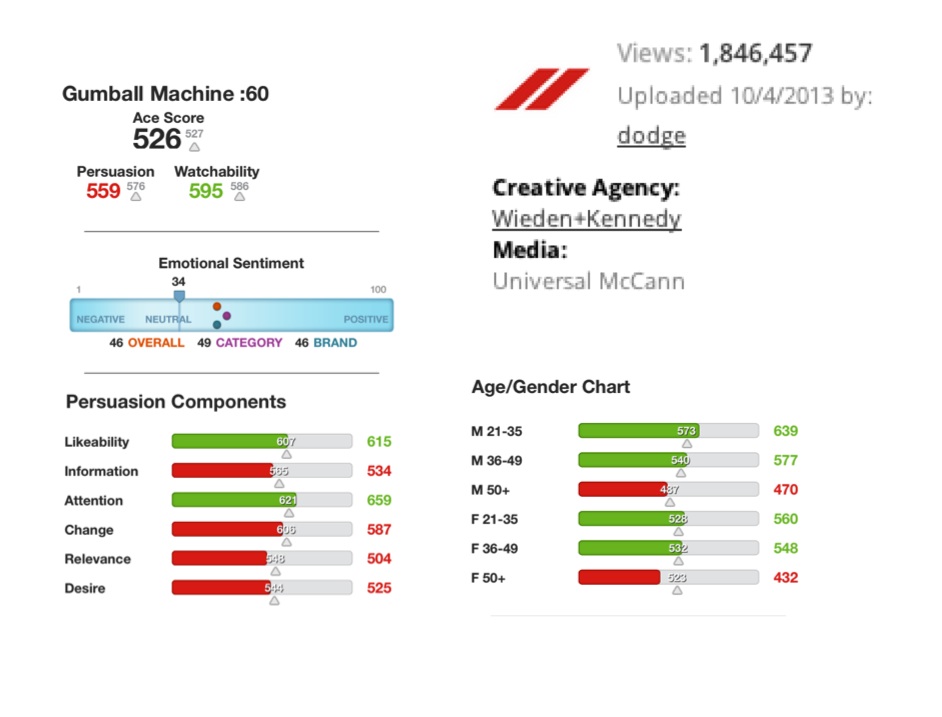 DieHard batteries exploits the incredibly popular zombie fad earning a viral ad with 1.7 million views during the month of October. But that fad also skews a bit younger and as it turns out, is also a polarizing one. More than about 15% of respondents mention zombies in the verbatim with a close to even distribution of words like “love” and “hate”. The ad did well with Males 21–49 and Females 21–35 and while Attention scores were through the roof (the mark of a great online ad), the ad falls short in Information, Relevance and Desire – important components of Persuasion. 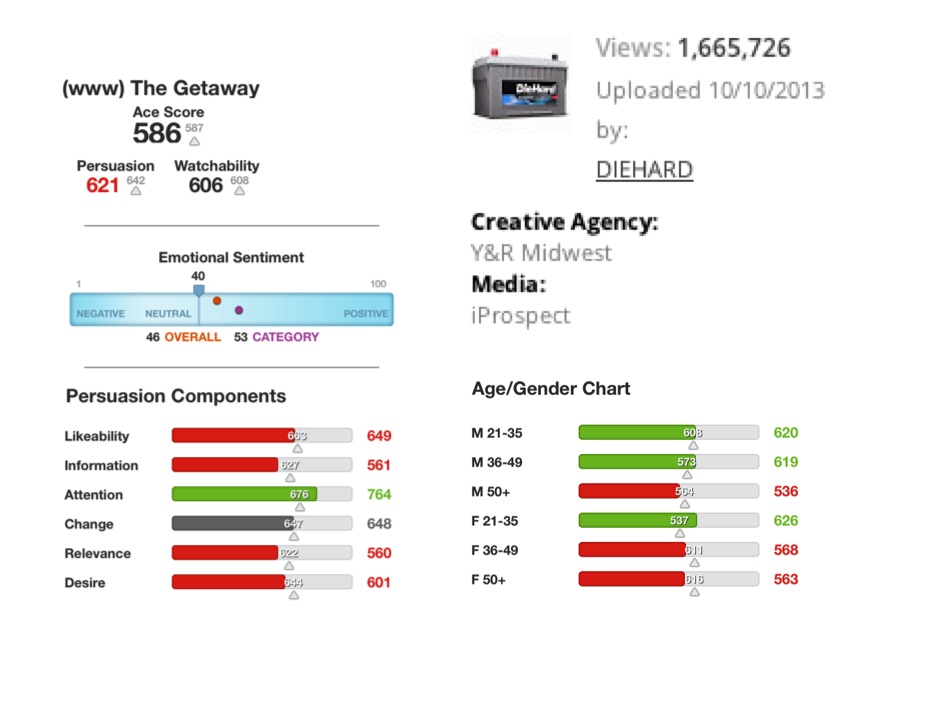 Who’s Leading in the Race for Brand of the Year?