Who’s Leading in the Race for Brand of the Year?

It’s nearly Thanksgiving and that means we are but a short 5 weeks from the end of the year. This is when we start to look at the brands who have ascended to the top of their category by virtue of entire portfolio of work for the year. As our CEO Peter Daboll says frequently, “anyone can create one great ad, but to create consistently great creative is an entirely different thing – and something we think should be recognized.”

So without further adieu, we give you the top five brands from each of the 20 most competitive of categories. Below you’ll find a few highlights seen in this year’s list. 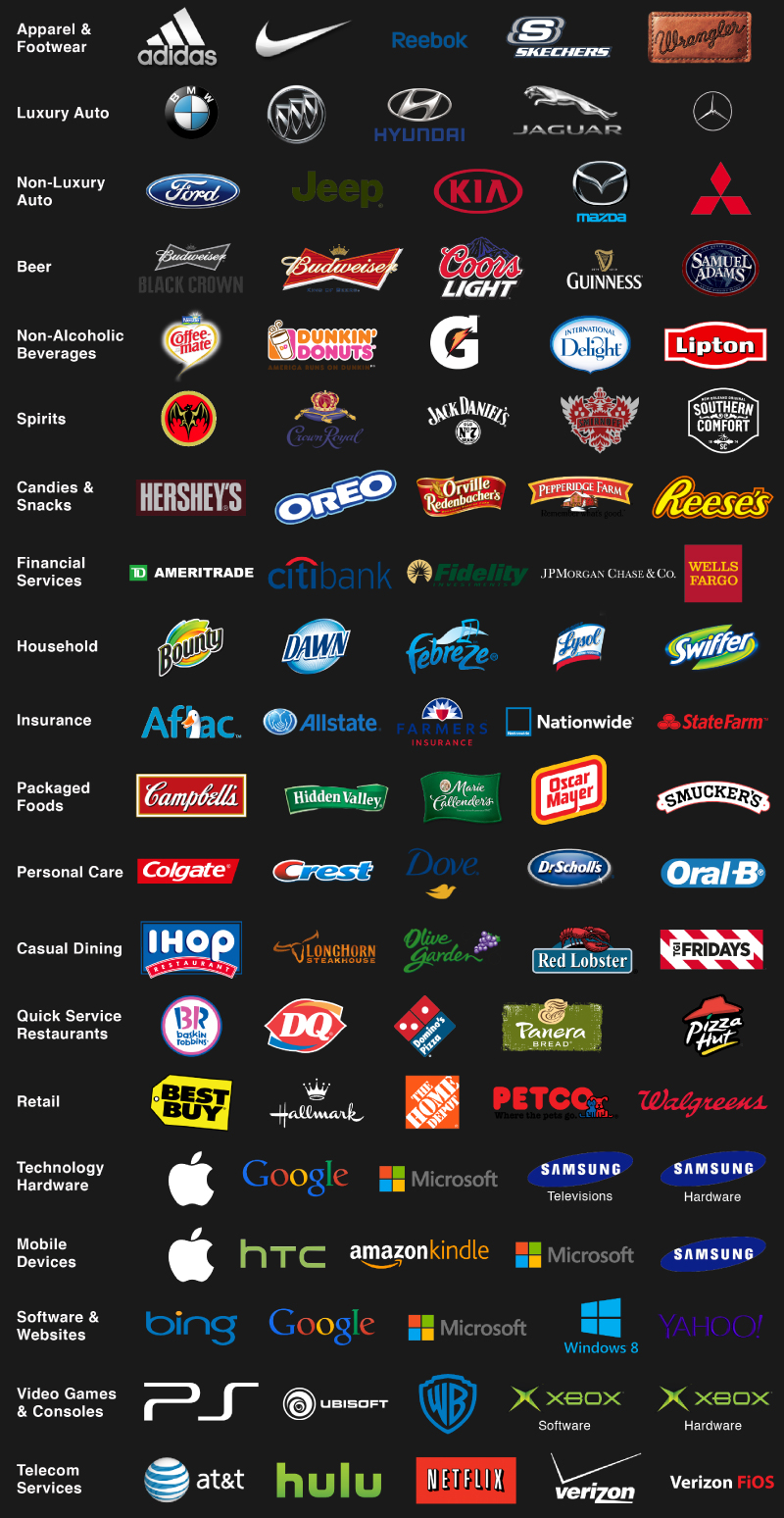 This year’s list boasts a significant number of new brands with only seven of the 2012 Brand of the Year winners making the watch list.

Apparel and Footwear
Adidas, Nike, and Reebok were among the top five brands for Apparel and Footwear according to the 2013 edition of the BLACKBOOK. Sketchers joined the team as well and Wrangler increased their creative output this year to qualify for this list whereas last year they ranked number one among the narrow portfolio brands (or those that aired less than 5 unique pieces of creative for the year.

Automotive – Luxury and Non Luxury
Luxury American car brands struggled to compete with foreign-bred car ads with Buick representing the only domestic contender in that category. Hyundai revved up its advertising to earn a first time spot on the Lux Auto list and achievement they have long awaited.  On the Non-Lux Auto side, however, 2012 Brand of the Year Winner Ford appears alongside Jeep for the Americans while Mazda, Mitsubishi and Kia round out the table.

Beverages – Non-Alcoholic,  Beer and Spirits
Has our American caffeine craving shifted from soda to coffees and tea? Furthering a trend that appeared in 2012, soda brands are noticeably absent from the list while the top five are dominated by coffee, tea, and creamers…even International Delight delivered a series of iced-coffee drink ads in addition to their coffee condiment ads.  And while last year’s list saw category leaders in juice brands (Ocean Spray and Tropicana), this year Gatorade round out the top five.

Unlike 2012, big beer makes a bit of a comeback in 2013 with Anheuser-Busch, MillerCoors and Diageo (Guinness) joining macro-brewery Boston Beer Company on the Watch List.  Blue Moon, last year’s Brand of the Year winner across all Alcoholic Beverages, didn’t make the top five.

M&Ms & Hershey’s brands typically battle it out for the sweetest spot – yet M&Ms fell off the top five this year (having won the category in 2012). For an incredibly competitive category (we track more than 80 brands in Candies & Snacks), the top five are consistent (minus M&M’s) with the brands leading the category for 2012.

Financial Services – Banking, Investment and Mortgages
Economically, we see consumers’ attitudes towards big banks thawing, with the appearance of Wells Fargo, JP Morgan Chase and Citibank on the list of contenders for the top spot in Financial Services – Banking, Investment & Mortgage. And again, 2012 Brand of the Year winner Visa and BLACKBOOK top-ranked E-Trade are noticeably absent.

Household
Household welcomes Bounty, Febreze, and Swiffer back to race for another year as well as BOTY Winner Lysol. Dawn, who’s series of Saving the Wildlife ads have rejuvenated the dishwashing soap brand is making a come back. The brand had fallen from #1 in 2011 far down the ranks in 2012 with limited new creative in an increasingly competitive category – but has earned several Ad of the Week and Ad of the Quarter awards to date this year.

Insurance
Liberty Mutual is the absent party on this list. The brand had a stellar 2012 rising to the very top of the charts with their “Humans” campaign but has gone silent in terms of new creative in 2013 as they regroup their creative roadmap. Meanwhile, Allstate, Farmers, Nationwide and Statefarm are returning parties alongside Aflac.

Packaged Foods
Home to some 150 brands, Packaged Foods folks on this list have stiff competition. Campbell’s and Oscar Mayer are classic participants while Hidden Valley, Marie Callendar’s and Smucker’s are worthy competitors. We’ll see which of these brands leverage the holiday season to maintain their top position.

Restaurants
Panera joins the ranks of the top brands for Quick Service Restaurants after investing more heavily in ad creative around their expanding menu and core values.

2012 Brand of the Year Winner Olive Garden is in familiar company with the exception of TGI Friday’s who, like Panera, was not a qualified contestant in the past but increased their creative units to secure a spot among these casual dining brands.

Retail
Top ranked retailers Hallmark and BestBuy are no surprise to see. Hallmark’s touching series of longer format story telling ads that broke at the beginning of the year gave the brand a strong start and if history is any indication, we expect to see some strong holiday as well. Best Buy has been a frequent Ad of the Week winner and is our November Brand to Watch – so we already have our eye on them. The Home Depot and Walgreens have also been recognized as delivering consistently strong creative while Petco has recently leapt onto the scene with their highly emotional campaign.

Technology Brands in Good Company… Their Own
There are many stablemates among the technology lists: Apple and Samsung, known for battling it out throughout the year, each hold spots on both of the Hardware and Mobile Devices lists for their tablets and phones. Samsung is also a contender for its television brand.

Microsoft finds itself competing among its brethren in several tech categories. Microsoft Outlook, Microsoft Windows and Bing are all on the Software and Websites list while Microsoft Hardware goes head-to-head with Apple, Google and the Samsungs for the Technology Hardware category. Among Video Games and Consoles, Microsoft again shares the race with Xbox Software and Xbox Hardware.

Telecom Services
In Telecom Services, Verizon has two contenders in the race with FiOS and Wireless services duking it out against AT&T and newcomers Netflix and Hulu, the latter of which may be a sign of the content services revolution.

Brand of the Year Qualifications
Ace Metrix scores every nationally airing television advertisement across 23 industries, 85 categories and is therefore uniquely qualified to report a brand’s overall effectiveness across the entire video advertising industry’s body of work over a year, as well as year-over-year. To qualify for Ace Metrix Brand of the Year Watch List, brands must have debuted five or more unique pieces of creative within an industry containing more than 80 pieces of creative and five qualifying brands. The top 5 brands to date for each of the 20 categories can be found at www.acemetrix.com/news. Ace Metrix will reveal the final Brand of the Year winners in the first week of January once all ads for 2013 have been scored.