As we enter the holiday shopping season, the obvious choice for a brand to watch is a retailer. The question really becomes which retailer. We cover over 100 of them from Ace Hardware to Zulily.com representing over 1,800 new pieces of creative per year. As we sat around the table debating, the data kept pointing us toward Best Buy – and for good reason.

Best Buy has been on a resurgent tear lately from an advertising perspective. Left for dead a year ago as yet another casualty of the digital age, the Blockbuster of electronics if you will, Best Buy has reinvented itself around price-matching, blue shirts and selection. The results have been stunning, the stock is up 300% YTD from the 2012 close.

The turnaround has many facets and needs a solid holiday season to really take hold, but the advertising results are very strong. Of retailers who have dropped at least 5 pieces of creative this year – Best Buy ranks among the top 5 with an average Ace Score of 582 for its 27 ads, 11% above the average for the rest of the category. Greatness with a single ad is a challenge, greatness across multiple ads is an achievement and Best Buy has delivered so far in 2013.

So how has Best Buy managed such an achievement – well a little counter-intuitively with celebrities, blue shirts and low price guarantees. Let’s start with the biggest surprise – celebs. We have published extensively on the subject, on the whole, celebrities hurt more than they help. There are certainly exceptions (think Oprah) but the data tells a pretty strong story (look for our upcoming update to the celeb paper in the coming quarter). Still, Best Buy bucks the trend with Amy Pohler, Will Arnett and Maya Rudolph. Together the crew posted an average score of 582, a full 21 points over the Best Buy average in the past year. Granted, we see some variance, with Amy leading the pack followed by Will and then Maya (who is below Best Buy’s 12 month norm) but that extra set of bling is working for the retailer.

Here is a snapshot of Best Buy’s Super Bowl commercial – still the tops for them over the past 12 months: 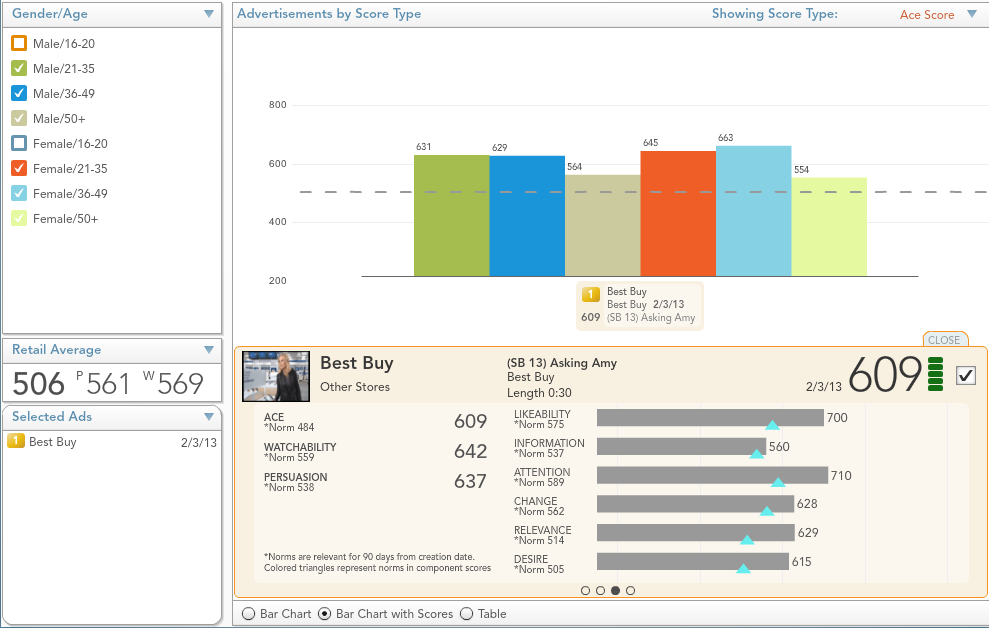 It’s not all celebs and games over at Best Buy, they have other angles too. One such angle is the extraordinary job they have done at humanizing, promoting and empowering their famed blue shirts. The blue shirts are in almost every ad (73%) and still manage to edge the norm. The blue shirts are so prevalent in fact, there is a full campaign around them – Beta Test narrated, as are many of the ads in the past year by the Entourage’s “E” also known as Kevin Connolly. This campaign averages a 564 and posts five ads with scores of 550 or higher – exceptional consistency. Interestingly, the Beta Test campaign also has a strong co-brand flavor to it and the deep dives provided by the blue shirts outperform other types of co-branded ads pretty soundly – 564 to 539. Co-branded ads are a bit of mixed bag for Best Buy but still produced some winners in the Beta Test campaign – like the following for the HP Split X2:

Take a look at the word cloud for the Beta Test ads. This represents over 1,700 open ends on 13,000 respondents. Note how positive (noted by the green color) the connotations are for these ads. Strong words like “informative” and “interesting” accompany the expected “want” and “cool”. It is also worth noting that while the ads covered a variety of brands, the only one to really get any recognition was Windows. This follows on our previous blog post saying we expect big things from Redmond in the coming year. 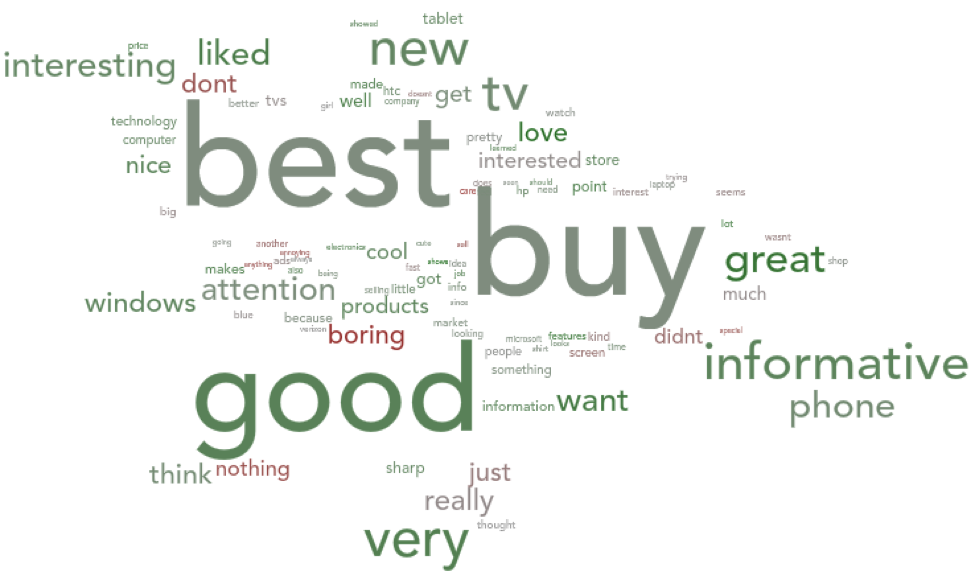 Finally, Best Buy has been delivering with its Low Price Guarantee/Perfect Match Guarantee (35% of ads and 33 points above the one year BB norm). These messages, along with ancillary but related messages on commissions (+38 points to the one year norm) are winners for the brand as they seek to circumvent the dreaded showrooming trend.

Here again is a top ad and the word cloud for the LPG ads: 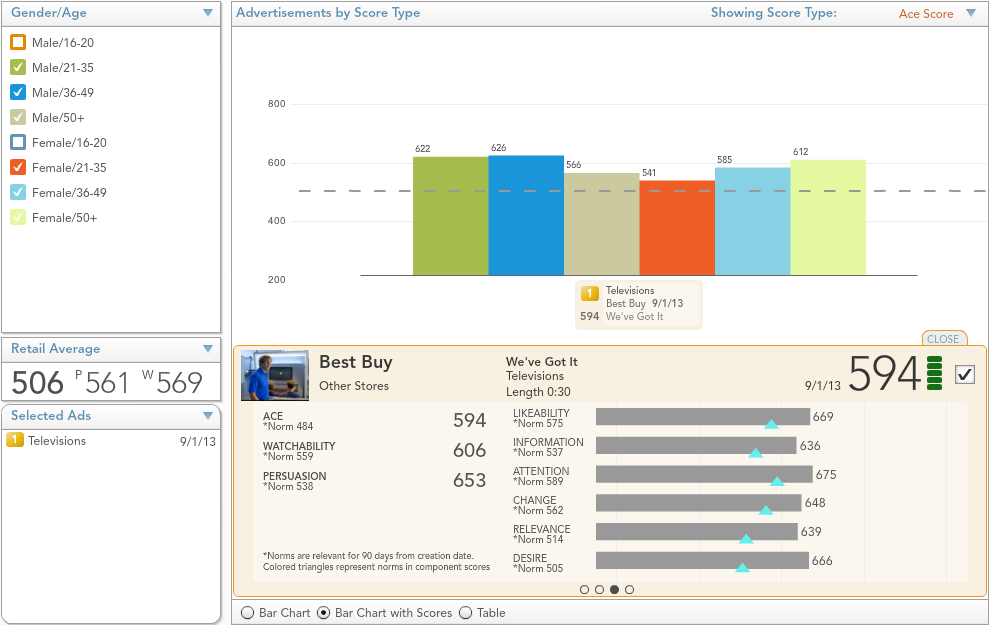 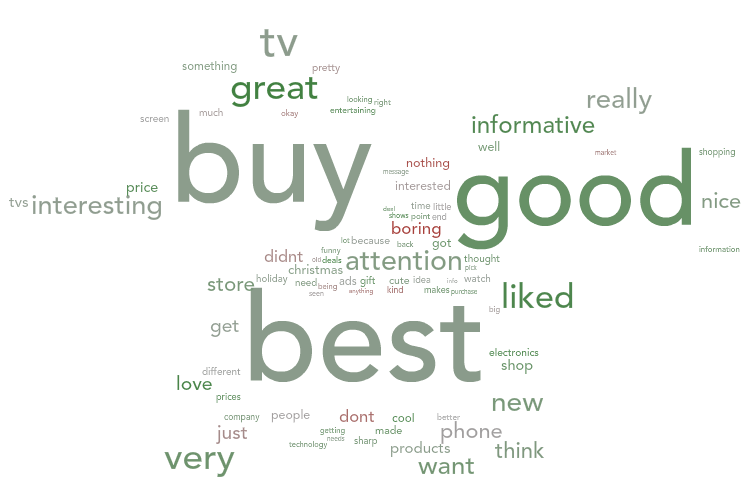 All of this won’t matter if the holiday season bombs – but we see a brand on a roll and that bodes well for the crew in Minneapolis come January. If they keep it up, they might even snag a spot on the Brand of the Year list come the new year.

Ads of the Week: Xbox, Lysol, Hillshire and IHOP