AD OF THE WEEK: CATEGORY OVERACHIEVER

Car rental ads don’t usually show up on the podium. In fact, we can’t remember the last time one did; but Enterprise’s new car sharing ad  was a significant departure from the standard “skip the line” ad and resulted in a 16.6% gap to the rest of the Car Rental category. One of the elements that made this ad special from a consumer’s perspective is that it led with Change. That is an unusual Persuasion component to lead with (although Netflix has also led with it recently). This ad also provided a high amount of Information but with a hint of humor and well-loved Rusted Root song, this ad hit on multiple cylinders.

It is worth noting that with an Ace Score of 575, “Car Share” is the highest scoring Car Rental ad in the last year. It took the top place of a previous Enterprise ad titled “Our Simple Philosophy” which posted an Ace Score of 533.

With its 688 Change score, “Car Share” leaves consumers with the feeling that Enterprise is moving in a new direction. Many respondents remarked that they had no idea Enterprise had car sharing and that they learned a lot from this quick 30-second spot.

Younger men and older women rated this ad the highest with women aged 50+ scoring it 20% above the Car Rental category norm.

As the insights suggest, many of these mature women are very familiar with the process of renting a car and the Enterprise brand, so the idea of a car sharing program was not a difficult one for them to grasp.

AD OF THE WEEK: TOP SCORE

Shifting over to the top ad from an Ace Score perspective, we have another winner from Samsung’s line of televisions. Ad of the Week aficionados will recall that Samsung’s TV division still holds the distinction of having the only ad to break 700. This ad wasn’t quite as strong, but beat out over 140+ entrants to take home the hardware—no small task. Samsung deftly applied humor as “You’re My Favorite” scored an overall Ace Score of 619, beating out Nestle’s emotional appeal in “Bake A Better Place” with a score of 615.

“You’re My Favorite” is now ranked second to another Samsung ad “Never Been Better” in the Television category of ads from the past year. The ad displayed a classic skew younger for both men and women, although males were slightly keener on the ad:

We were a bit surprised to find that 4% called out the TV by its new acronym (UHD) while 11% referenced Samsung by name. Even better for Samsung, Attention scored over 700—a difficult task regardless of the product. 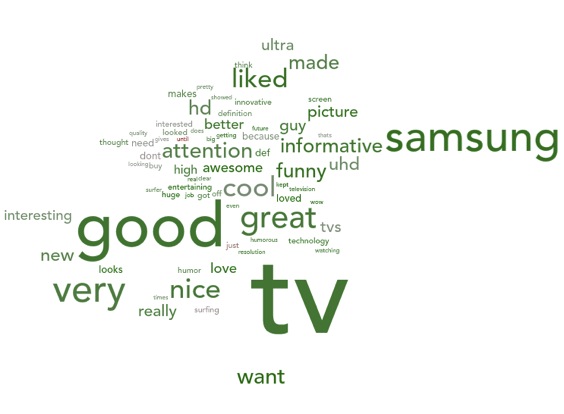 Top 5 Questions Around the Holiday Season