Top 5 Questions Around the Holiday Season

The weather is changing, albeit only slightly here on the West Coast. That’s our first inclination that the holiday season is nearly upon us. That, and the K-Mart ad that appeared nearly a month ahead of last year’s first jingle bell. So to kick it off, and get us feeling the spirit of the season, we got to thinking about what this year’s holiday advertisers might be working up.

Can Santa Find His Mojo?

In 2012, Santa participated in a fair number of ads but was noticeably absent from the list of most effective—whereas in 2011 he appeared in 6 of the top 10.

Apple, Pillsbury and Coca-Cola earned the top 3 spots that year, each featuring the jolly old elf prominently. Yet in 2012, consumers were more practical than whimsical, delivering top scores to the creative that emphasized value and solid gift ideas. Will America be ready for some more magic this year or once again reward advertisers for ideas they can use?

Will the Halls Be Decked?

Ad volume last year was up overall with Retail (67%) and Technology (5%) taking a larger piece of the holiday pie than it had in 2011. On the other hand, Automotive’s total contribution was down substantially, representing 9% of the total in 2012 vs 15% in 2011. And the Alcoholic Beverage brands weren’t feeling the spirit either, dropping from 5% in 2011 to 1% in 2012. 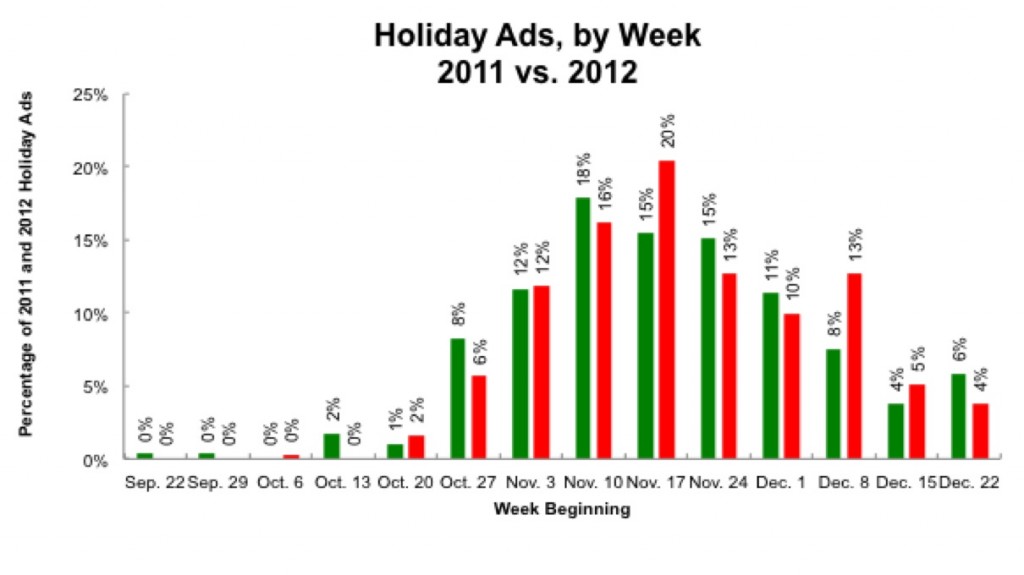 Will Consumers be Visited by Ghosts of Xmas Past?

Last year, despite the overall volume increasing year over year, we saw a fair number of brands recycling their past holiday ads. Allstate, Audi, Campbell’s, Cheerios and Folgers all served up ads we recognized rather than introducing new creative for the season.

Will Advertisers Win Over Our Heads or Our Hearts?

As I mentioned earlier, the top scoring ads last year predominantly featured great value, savings, giveaways and gift ideas. But among the bounty of seasonal ads were a selection of heartstring tuggers, such as Hallmarks ads—two of which were ranked among the top 10.  “Christmas Memories” features a couple individually describing for their child the memory behind each tree ornament. “Just Tell Me” has people young and old sharing their inner most wishes. We’ve seen brands reaching outside traditional messages to connect on a more emotional level, such as Guinness’ latest ad “Friendship” and Chipotle’s “The Scarecrow”—even Extra’s “Origami”.

The first ad has already aired, nearly a month ahead of last year’s season opener. K-Mart introduced “Free Layaway” on September 9th —earning a top quintile score of 553 and a positive response from viewers despite 5% of respondents calling the gingerbread man “creepy”. K-Mart was also first to air a holiday ad in 2011, delivering “Easy Way To Pay Without Finance Charge” which debuted on September 24th.

Target was first out of the gate last year with its iconic big dog ad “Are Your Ready” (October 7, 2012).

We expect to see more retailers ushering us into the season with reminders to shop early and layaway options, particularly considering a lower volume Back to School season among retailers. But at this point K-Mart is jingle belling alone.

The early bird doesn’t necessarily catch the worm in terms of capturing viewer attention and affinity. While the K-Mart spot scored well, ads that top the highest scoring each year are those that debut closer to the holidays—in fact, the top 10 list for both 2011 and 2012 only include ads that broke after October 24th.

As you’ve probably guessed, we’ve got a lot of data behind holiday ads. In fact, we are busting at our red velvet seams and looking forward to sharing it with subscribers to our holiday package. We’ll gladly give advertisers a special login to the Ace Metrix LIVE platform to watch the ads and analyze the data on more than 700 holiday themed ads from the past two years—plus access to this year’s ads (including the K-Mart spot) as they break. And you won’t go it alone. Our client services team will be there with bells on to take you through a full analysis of the historical trends at the beginning (that’s now, in case you didn’t know) and at the end.

If you’re planning to run holiday ads, you’ll want to see instantly how they resonate with shoppers and how they compare to every other ad. This is a great chance to test drive our data platform and mobile applications and gain cross-category view of the advertising landscape.

Ads of the Week: Microsoft, Kerrygold and United