Mayhem, a force to be reckoned with, wreaks havoc on all things that he touches. But we wanted to provide a more insightful look at the positive impact that his character has had on Allstate’s advertising and branding efforts. Allstate first introduced Mayhem in 2010 and has since turned the character played by actor Dean Winters into a household name – joining the ranks of Geico’s Cockney accented Gecko and Progressive’s Flo.

With over ten years of data, Ace Metrix is in a unique position to track all the highs and lows (but mostly highs!) of Mayhem. Ads like those with Allstate’s Mayhem are aiming to use entertainment for effectiveness, brand building and recognition and our Likeability measure is a great way to understand whether a brand has met those objectives. The chart below shows Likeability scores for Allstate’s Mayhem spots as well as the Insurance industry average over the same time period. It’s interesting to see that Allstate scores only dropped significantly below norm in 2015, with Mayhem ads reaching their peak Likeability in 2019 (at an average score ≈688) — an impressive feat for a character that has been around as long as he has. 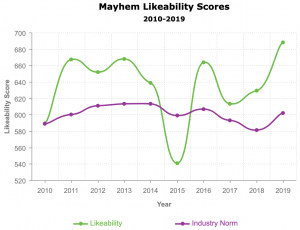 So what happened in 2015? Allstate ran a series of Mayhem spots that parodied direct response ads in which Mayhem sold people’s stolen stuff. These ads were the very disruptive type – with calls-to-action and in-your-face price tags accompanied by oversized text that would make a billboard feel embarrassed. The low levels of Likeability for these ads is partly due to the fact that they had an uncanny resemblance to the real-life direct response ads that so many people are scarred from. So accurate, yet so painful to watch. The chart below displays the range of emotions that viewers expressed for Mayhem ads in 2015, with the Funny score showing up as 3.4 (as opposed the average of 6 in 2019): 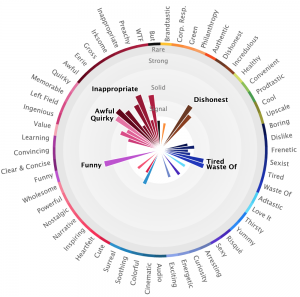 While recently they’ve brought Mayhem work in-house along with help from 72andSunny, Allstate and their agencies have produced dozens of spots featuring his character over the last decade. With nearly all the analyzed ads attempting to hit on humor, they have also allowed Mayhem to achieve discernable recognizability amongst viewers. The latter showing strong prevalence in all of Mayhem’s ads, while the former is just now reaching its peak according to viewers.

The list below ranks the ten highest-scoring Allstate spots since 2010 according to their Funny Score, a measurement derived from the strength of emotional connection to ads. Ace Metrix’s proprietary approach quantifies 57 emotions and reactions to video creative. Scores are passively derived from voluntary respondent verbatim comments using Natural Language Processing and machine learning analysis. Each of the 57 emotions are evaluated relative to all other ads in the Ace Metrix database, totaling over ten million verbatims.

The two highest-scoring ads broke into our Strong band of signal for Funny, meaning they’re funnier than 99% of all ads:

Fun Fact: The top 10 Funniest ads from Allstate all featured Mayhem. What a guy.

*Breakthrough capability (a combination of Attention and Likeability components) was used as the tie-breaker for fourth, fifth, and ninth place.

Not only is “Cat” the funniest Allstate ad of all time, it also scored as the second funniest of all ads in 2019 – coming in right after Pandora’s “Be You | Afternoon”. As one of Allstate’s more recent spots, airing in September 2019, “Cat” proves that the multitude of Mayhem’s havoc-wreaking characters not only continues to resonate well with viewers but has actually grown.

In addition to the Strong Funny signal, “Cat :30” fired Solid signal for Quirky and Ingenious metrics. These two emotions come from the unique character that Mayhem portrays and the situations he gets himself into in the spot. With Solid signal for Love It, you can see why viewers thought this was the funniest of all the ads, despite the character being around for so long. “Cat :30” registered Solid signal on Memorable, indicating that despite a decade of work, Mayhem as a cat will stick around in people’s minds. 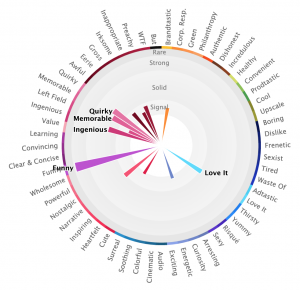 To add to their success, the top three funniest Allstate Mayhem ads all scored above (way above!) the Insurance industry average on all components, indicating just how effective the character and humor can be for the brand.

Along with it’s 15-second cutdown, “Cat :30” generated positive consideration among 44% of viewers (much better than the industry norm of 32%) – with “Parking Guy :30” trailing right behind at 43%. Seems like humor (especially when it has to do with a cat tearing your house apart) serves as a relevant touchpoint for viewers, hitting home with a slightly exaggerated yet still common issue some home-owners have dealt with:

Verbatim comments indicate just how much viewers associate Mayhem with the brand:

“Have always Loved the AllState Ads featuring this character and the problems he gets into. They are hilarious and I always look forward to a new installment. Frequently visit the YouTube Channel with these ads for a pick-me up when having a bad day. I certainly Never, Ever, forget this is AllState Insurance!!” Female 50+

“The mayhem guys a well-established brand. He does well for Allstate and I’m always happy to see him. The viewer doesn’t learn anything new. But it doesn’t need to. We all know what mayhem is selling and were happy to chuckle at the ad.” Male 21-35

Allstate has managed an impressive feat with Mayhem- his ads have grown in humor and effectiveness recently, not worn out after a decade of presence on our screens. We’re looking forward to seeing what he has in store next.

How Brands Are Navigating the COVID-19 Pandemic