In the understated words of the masterful Walt Disney himself, “Animation offers a medium of storytelling and visual entertainment which can bring pleasure and information to people of all ages everywhere in the world.”

In what ways can animation in advertising benefit a brand? A recent article by WARC covers the rising trend of animation in advertising noting two key benefits- providing greater flexibility in storytelling as well as the ability to anthropomorphize inanimate objects. We’d add to that list the ability to at times smooth the road on more “uncomfortable” topics. But, what’s the most effective way to use animation in creative? We were curious, so we took a look at some of the most memorable animated ads in recent history to see how viewers responded.

As shown by the variation in Ace Scores, animation isn’t the defining characteristic of an ad’s overall performance. With different approaches and reasons to animate, we found there isn’t one correct formula for success. Some brands anthropomorphized lovable mascots through CGI to tell a new and different story for everyday products (Coca-Cola, Taco Bell, Charmin); while others created CGI characters that were simply bizarre (Mountain Dew, MailChimp) – eliciting emotional reaction either way. Some combined animation with humor to deliver messages that might otherwise be boring, uncomfortable, or even gross (Hello Toothpaste, Squatty Potty, CharcoCaps, Lactaid) while others brought their brand to life through a tie-in with a well-matched animated film character (23andMe, Ancestry.com).

Viewers found about two-thirds of the animated ads new and/or different, with the top ranked ad on the Change measure (“What’s In Your Toothpaste? An Inconvenient Truth”) educating consumers on a slew of facts of which most were previously unaware. The animation was not viewed as innovative so much as the use of it in informing viewers. Coca Cola and Charmin (“Two Day Underwear”) used CGI in storytelling to bring lovable mascots to life and highlight their everyday product in a unique manner. A talking taco delivered a creative history lesson to Taco Bell viewers expecting the standard QSR food close-ups, while the remaining positive scores reflected newness/uniqueness of the products themselves.

Charmin’s (“Passing Inspection”) and CharcoCaps cartoon-like animation did not impress viewers as being innovative. We did see somewhat of a bias against overly strange ads and those addressing less “entertaining” topics (in the case of “MailChimp,” viewers’ mass confusion lent the ad extremely poor ratings on first viewing – more on this later).

For some ads, the animation (visuals and/or characters) took center stage, but for many it served as a means to an end (to more effectively present a product or message): 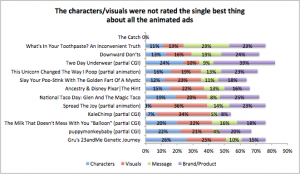 Nearly all of the animated ads that intended to inform were viewed as highly informative by consumers, suggesting the approach can indeed provide a means of delivering a great deal of information on otherwise boring or uncomfortable topics in a more attention-getting manner. The chart below ranks the ads on perceived levels of information:

However, half of the animated ads we studied were not well-liked by viewers upon first viewing, with many expressing little to no interest in seeing the ads again in the future. Much of this dislike can be attributed to the length of the videos, “weirdness,” and/or the subject matter. Whether long or short, when the story you have to tell is more mundane (or technical or awkward), viewer engagement is much more susceptible to trailing off without some enhancement to the story. In the chart below, ads are listed in order from longest to shortest:

Even with animation, attempts to present the benefits of products serving our perhaps least refined of human habits (passing gas and bowel movements, for example), are first met with shock and sometimes awe. Some find the directness of these ads hysterically funny, while others see them as incredibly offensive. Yet, they are informative and depending on the animation, attention-grabbing: 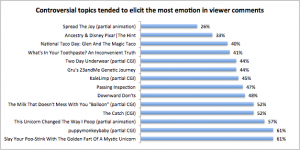 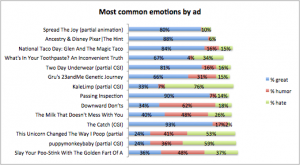 Interestingly, viewers do not appear as willing to admit relevance for products such as CharcoCaps and Squatty Potty:

Squatty Potty’s first ad to consumers was met with an overall strong level of dislike, but Squatty Potty did a fine job of getting massive attention (both from viewers in our testing and in the press), and educating on the benefits of the product. Adweek credited “This Unicorn” spot for a 600% increase in sales online as well as a 400% improvement at Bed, Bath, & Beyond, the brand’s largest retail partner. However, there is no doubt the exposure the ad received (thanks to Lauri Greiner of Shark Tank) played a part in this success.

There is also the concept of accustomization. The first Squatty Potty ad to actually advertise such a product way back in 2015 was met with much viewer disagreement – one of the most polarizing ads we’ve ever tested (99th percentile). Yet just one year later, a little bit less disagreement was seen for “Slay Your Poo-Stink” (and favorable responses outnumbered the negative), and by 2017, CharcoCaps saw no higher than average polarity (and again, less negativity). Importantly, all three utilized humor to soften the blow, as depicted in the emo word clouds (which represent viewer verbatim comments):

While not all of these ads were created to drive purchase intent some of the strongest Top 2 Box purchase intent scores were observed among long-form, educational ads, suggesting animation can be a very good option when brands have some explaining to do: 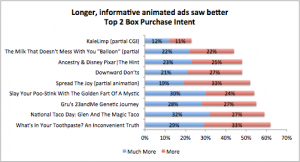 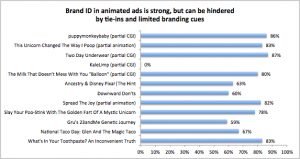 You may have noticed that ads seen as completely off the wall did not show well in this study – these outliers would not be successes in conventional settings on their own, but these marketers were counting on this weirdness to create a “buzz” for the brands that they were prepared to take advantage of. By airing “Puppymonkeybaby” during the Super Bowl, Mountain Dew ensured mass viewing, with the weird factor getting people immediately talking on social channels. Similarly, developing creative off a mispronunciation of their product name among listeners of a popular radio show, MailChimp created a similar “hip” factor – those in the know loved it, simply because they were part of the crowd; those not in the know just found the whole concept strange and creepy. The resulting cultural “hipness” surrounding these ads led to significant success in terms of social views and awareness.

As we’ve seen countless times, storytelling works, particularly when brands have a large amount of information to deliver because it harnesses attention in such a way as to hold interest on topics (or ad lengths) that might otherwise bore or turn off viewers. Our review here suggests that animation does indeed enliven this effort, with the majority of these ads beating industry performance norms. Moreover, animation can cement Brand ID and foster positive purchase intent as well or better than non-animated ads. While consumer attitudes may be harsh on the first ad to attempt to sell products that are seen as undesirable, attitudes in America shift quickly, and humor definitely can help smooth the road to acceptance. Being super creative to the point of being off the wall will always be a risk, but chances for success can be multiplied with excellent cultural relevance as in the case of Squatty Potty, Mountain Dew, and MailChimp- all of which attached themselves to a popular radio/tv programs, among other approaches.