These ads warmed our hearts and gave us a good laugh in a year when we needed it.

The past twelve months proved to be tense and turbulent, with emotions intensifying after every tragedy and triumph. More often than years past, brands in 2017 used advertising to share their voice on different issues facing society. Some portrayed unifying themes like inclusion, kindness, and compassion. Others simply entertained with creative elements like captivating visuals, engaging storytelling, or LOL humor. All said and done, the most effective ads must engage consumers on an emotional level–not only to have an impact on their perceptions and actions, but to even be viewed in the first place.

“Viewers continue to control what they watch. These days, ads need to provide a certain “emotional” reward for viewers to watch until the end, or even get them to pay attention in the first place. It’s more than just breaking through the clutter; ads need to establish an emotional connection with viewers. But in today’s cord cutting media environment, that is no easy task.” said Peter Daboll, CEO of Ace Metrix.

“All of these ads excelled in making us feel something. Whether it was humor, inspiration, tugging at our heartstrings or downright ‘what was that?!’, real viewer reactions created these lists of the best of the best.” added Daboll.

We are thrilled to acknowledge the most heartfelt, funniest, and, yes, weirdest ads of 2017. The following lists were derived through a combination of machine learning and Natural Language Processing methods looking at the frequency of emotive words and phrases used in viewer comments. With over 8,000 video ads analyzed in 2017, and over 3 million viewer comments, these ads distinguished themselves by achieving the highest level of emotional impact with viewers.

The Most Heartfelt Ads of 2017 — frequently occurring words and phrases include very heartfelt, brought tears to my eyes, very emotional, and heartwarming.

Last year’s ups and downs gave brands the opportunity to commemorate the kindness and compassion people have for one another. Some brands took a philanthropic approach — common among the five most heartfelt ads — while others shared heartwarming stories.

Subaru’s ad, “Share Kindness,” pulled the most heartstrings with its powerful message “Love. It Makes the World a Better Place,” and its promotion of Subaru’s charitable event, Share the Love. Viewers enjoyed the message, with a majority naming it the Single Best Thing about the ad. Even though it didn’t show any Subaru vehicles, “Share Kindness” resonated extremely well with brand considerers, and across auto intenders, as you can see in the gap-to norm graph below (norm for this graph is 2017 auto industry). 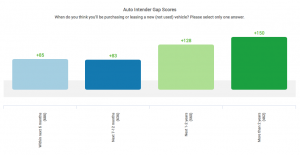 Hyundai pulled off an impressive feat when it filmed “A Better Super Bowl” DURING Super Bowl LI, and then aired it right after the last whistle. The tear jerker is a reminder of the importance of family and togetherness, and the sacrifices military men and women make for our country. The ad scored significantly above automotive industry norms for every metric we measure, except Desire which is expected considering it was not product-centric.

When an advertiser stands for something other than the functional attributes of a product or service, viewers feel a stronger emotional connection to the brand. While many brands attempt this approach, not all are successful. But successful “values” ads from Walmart, AT&T, and Mastercard called attention to charitable causes for natural disaster victims, veterans, and those with cancer. All three ads scored highly on Information, as viewers learned more about the programs and causes beyond the products each brand sells.

The Funniest Ads of 2017 — frequently occurring words and phrases include hilarious, funny, made me laugh, and hahaha.

It’s hard to be funny. Especially across a broad, demographically diverse viewing audience. But for these brands and their exceptional ads, they found a way to make viewers laugh – a lot – using relatable content. Skittles made the Funniest Ad of 2017 with “Romance,” which was also recognized as a Super Bowl LI Standout. Not only did the ad achieve high Breakthrough (combined Likeability and Attention scores), but it also successfully drove Desire for Skittles as show in the ad personality chart below. With a low polarity score of 39 (average for Candies & Snack industry is 48), the humor in this ad appealed to viewers across all demographics.

“The Theater,” inspired by SkinnyPop customers’ stories, ranks second. Viewers found the hilarious situation at the movie theater relatable even at the end when the unrealistic happens, and a microwave falls out of a woman’s shirt. Moreover, 74% of viewers would consider sharing the ad with their social circles. The third funniest was another Super Bowl LI standout, Kia’s “Hero’s Journey.”

Kraft Macaroni & Cheese celebrated perfectly imperfect parenting in its Mother’s Day spot “Swear Like A Mother.” The ad was the result of a survey of Millennial parents where 74% of moms admitted to swearing in front of their kids. The ad achieved strong Breakthrough and Relevance among Millennial parents. “CowzVR Reality” is Chik-Fil-A’s fun and engaging interpretation of virtual reality. Putting cows in place of people doing crazy stunts on the virtual screen helped humorously tie in the brand to current trends that are relevant to today’s consumers.

The Weirdest Ads of 2017 — frequently occurring words and phrases include eerie, disturbing, creepy, and weird.

Weird doesn’t mean bad. Some ads are made with the main purpose of grabbing attention, as is often the case with those that leave us with a weird feeling. Or brands are targeting a specific, narrow demographic, whose message or language might not be understood by others. But all of these ads were in the top decile for Attention; grabbing and keeping viewers hooked all the way through some pretty strange, and long ads leaving viewers to ask the question “what did I just see”.

It’s almost guaranteed this type of creative will garner high polarity scores, as viewers tend to either love, or hate, them. The combined word cloud for all five ads depicts how much viewers mentioned words related to weird, but also attention. These ads were as interesting as they were strange, which led to their great success with keeping attention (impressive considering most of these ads were 1:00 or longer).

Combined Word Cloud for the Five Weirdest Ads of 2017

Mike Dive, the director of Halo Top’s “Eat The Ice Cream,” created the ad with the intention of being “creepy enough to capture the internet’s attention.” The polarity chart below represents viewers mixed reactions — some loved the dark humor, while some were forever frightened of ice cream — but the cinematic production and the creative, dark storyline was enough to successfully grab and hold attention. 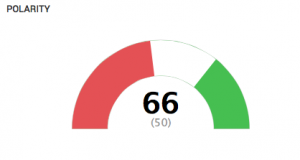 In “Scary Dependents,” ghostly children frighten Kathy Bates in her new home, but TurboTax has human help on demand so she doesn’t feel alone and can ask tax-related questions. Playing on several classic horror films, TurboTax was able to instill a familiar fear in many viewers, but then lightened the mood with some humor.

Mailchimp gave us something we’ve never seen before, and maybe never want to see again, in “KaleLimp.” The unique CGI dog made out of Kale was inspired by the mispronunciation of Mailchimp’s rather simple name on the podcast Serial from This American Life. Viewers who knew this loved the ingenuity, and those who didn’t thought it was weird and creepy. Appealing directly to Millennials and Gen X, Nissan used an unusual approach to “truck advertising” in “No Lazy Horses.” Younger viewers found the little, lazy horse people unsettling, but many appreciated the humor– exceptional at grabbing and keeping attention, in a very unusual car/truck ad.

Congratulations to all the brands who delivered emotionally packed ads in 2017! Ace Metrix will be focusing on the emotional connection brands make with consumers in 2018. We’ll be continuing to lead the way with quantitative analysis of our qualitative data so advertisers can better understand how their ad is resonating emotionally, and how those emotional qualities connect with in-market results. The Science of art.

[Infographic] Playing to Win: How to Score with Your Super Bowl Ad