At a time where almost everything is a divisive issue, brands are channeling the true meaning of the holidays in their creative this year. Viewers are enjoying ads with themes of togetherness, inclusion, and giving, and find them very relatable, and more important, Likeable — which has a strong impact on sales, as revealed in this study published by AdAge. Ace Metrix analyzed 275 holiday ads as of December 1st, with some of the earliest ads airing mid-October. Now that the spirit is in full swing, we thought we’d take a quick look at the Most Liked Holiday Ads so far this season.

For seven of the the top ten ads, the message is the strongest creative aspect, with viewers naming it the top Single Best Thing. Intangible gift giving, like time, appreciation, and love, is an unusual message for brands trying to sell products, but several of the most liked ads did just that. The lack of promotions, flashy visuals, and other creative elements among the most Likeable ads demonstrates how viewers want brands to simply remind them of the season’s true spirit with uplifting themes, such as family and togetherness.

So far, USPS has the Most Likeable spot with a heartwarming reminder of its reliable service in “Biggest Gift.” It ranks as the best among all delivery service ads dating back to 2010. The trace chart below shows engagement steadily increased throughout the 60-second ad across viewers aged 21 – 50+, with two spikes during the Christmas tree scene and at the climax. In comments, viewers thought the service fit perfectly with the story and the holiday spirit resulting in strong resonance.

Amazon has two ads among the 10 Most Likeable Ads. The Amazon ‘Brand’ was rated the Single Best Thing about “Give A Little,” beating its catchy rendition of the Supertramp song and creative visuals of the Amazon logo on boxes singing along. The ad’s cheery tone combined with the brand’s high regard among viewers drove Likeability and Relevance.

Mercedes-Benz featured Santa in its holiday ad “Pitstop”, but for viewers it was an unexpected, adorable puppy that distinguished the ad from other generic holiday auto creative. As depicted in the chart below, the ad resonated significantly above auto-industry norms for auto intenders at all stages, but particularly well with those looking to purchase within six months to a year. 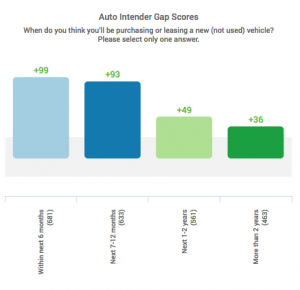 Academy Sports & Outdoors also has two ads in the 10 most liked, one of which tied with Verizon’s “Giving Thanks” for the 4th spot. Academy Sports’ heartwarming messages about sharing, kindness, and spending time with the ones you love were very well-received by viewers, who rated them as the Single Best Thing about each ad by a landslide.

Verizon, NFL/Ford, Samsung, and Petsmart all have ads that emphasize the selflessness the holidays bring about. The NFL & Ford delivered an emotional ad about the importance of togetherness and giving back to those who sacrifice so much for our country. While most Dallas Cowboys fans are in the south, viewers from all US regions, especially the West, resonated with the ad’s message.

In the ad personalities below, we see that the two mobile phone related ads used messages of togetherness and giving to drive strong Breakthrough and Relevance. Samsung represented various cultures and beliefs in “Giving is a Gift,” lending to the ad’s celebration of the spirit of inclusion and togetherness during the holidays. Verizon reminds us of the service of first responders in communities across America, and gives thanks to those people that sacrifice so much so that everyone else can enjoy the holidays.

Advertisers should make sure the message has an authentic and clear connection to their brand, or risk causing confusion and lessening desire. Samsung did not feature its product until the end of “Giving is a gift to be shared,” which had many viewers puzzling over what the ad was trying to sell. Also, viewer comments revealed some were confused about Verizon’s connection to first responders, or felt the ad exploited them when they saw the brand at the end. If Verizon explained its relevance at the start, viewers could have processed the ad with that information, whereas explaining at the end caught them off guard.

Congratulations to USPS and all those among the Most Liked Ads of the 2017 holiday season thus far: