The 50th anniversary of the Apollo 11 moon landing did not go unnoticed as brands seized the opportunity to celebrate the monumental, historical event with everything from social media posts to new products. We wanted to look at video creative from some of those lunar marketing initiatives to see if the past has a place in present day advertising.

Each of the brands below entertained viewers with a unique twist on footage and/or voice recordings from the first moon landing. Krispy Kreme and Budweiser unveiled new products. Blue Moon sought to remind viewers of its brand name’s relevance. Using visual storytelling to integrate past and present, Samsung highlighted the advancement in TV picture quality since the moon landing. Lastly, Verizon and Volkswagen reflected on the past while making plans for the future.

Breakthrough was above norms for all of the ads, with Krispy Kreme excelling the most on Attention and Likeability, followed by Samsung and Verizon. Reference to the historical event was also most prominent in their ads contributing to strong Relevance scores. On the other hand, Blue Moon relied more heavily on its brand name than on the moon landing itself, contributing to the weakest Relevance score out of the six ads examined. 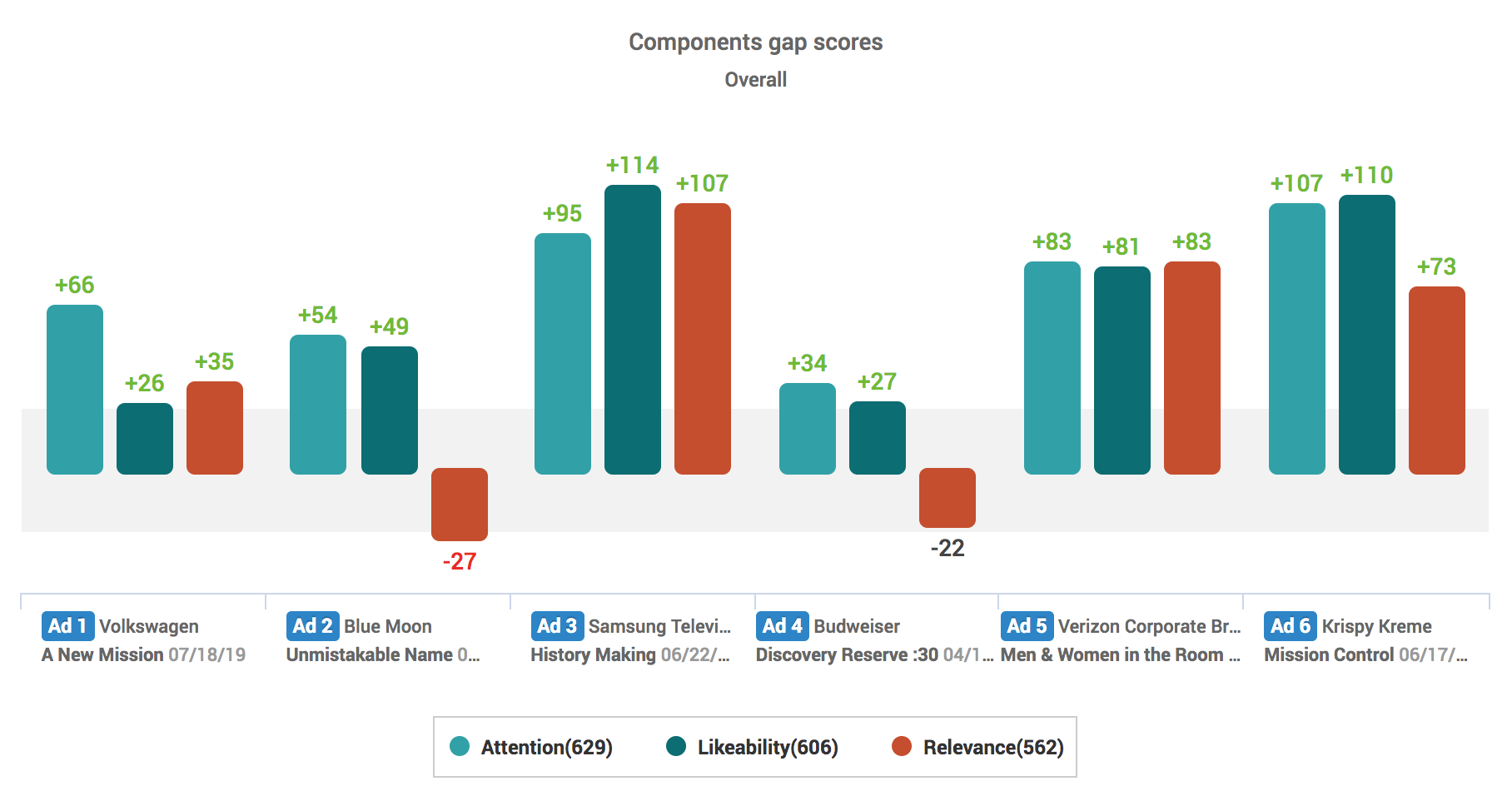 Viewers found most of the ads Informative and innovative in the sense that the brands appeared to be moving in a new direction (measured by our Change score). Blue Moon’s “Unmistakable Name” had the weakest scores for both Information and Change as the ad was likely created with the intent to remind viewers about the brand. 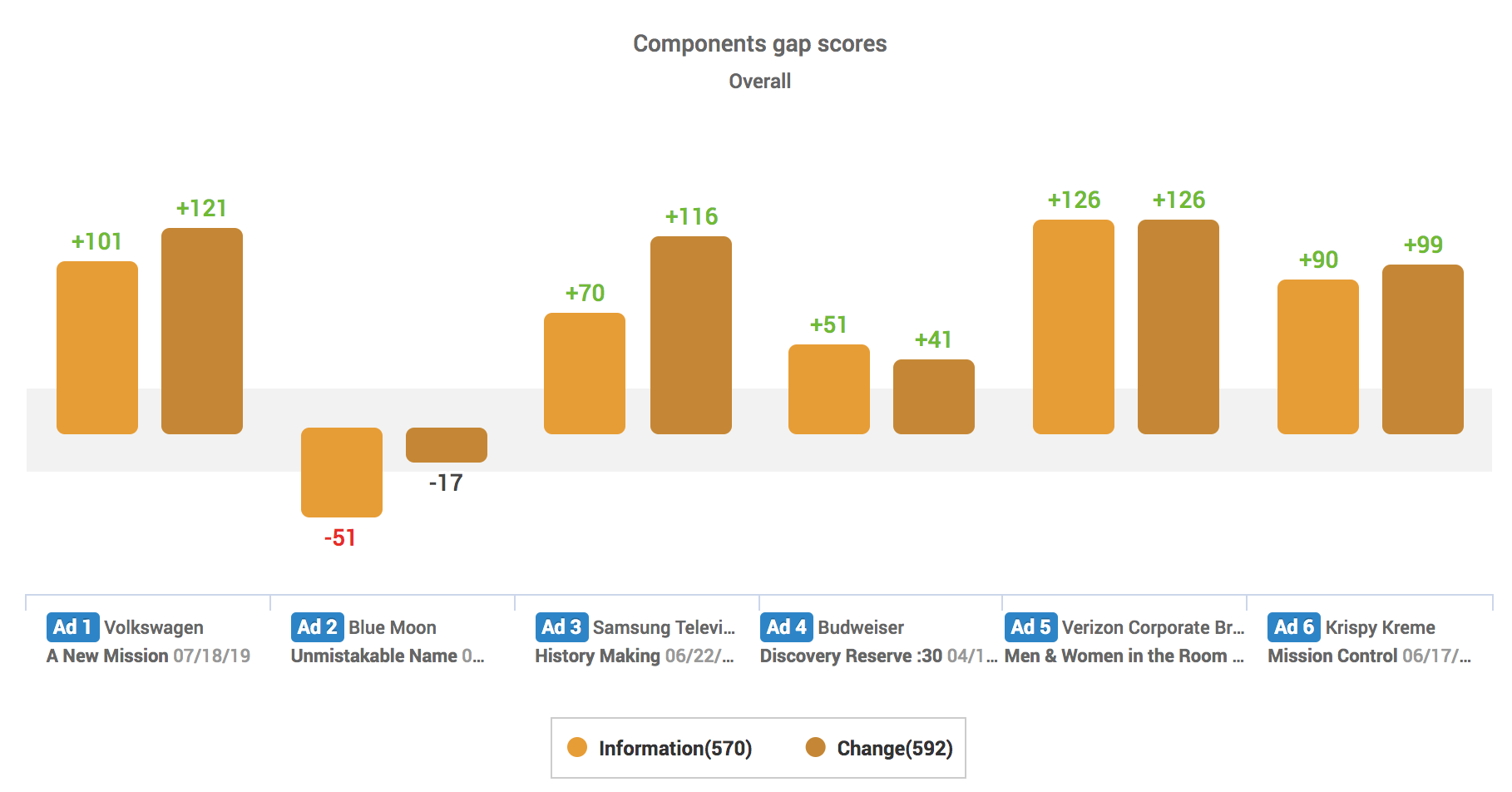 The Visuals were the key component for Blue Moon, Samsung, Verizon and Krispy Kreme ads, while Volkswagen’s future-focused “Green” Message stood out to viewers as the Single Best Thing. Meanwhile, Budweiser’s “Discovery Reserve” had several strong components that tied together including the Visual Scenes, Music (Norman Greenbaum’s “Spirit in the Sky”) and the new lunar-influenced product.

Appropriately, most of the ads evoked subtle feelings of Nostalgia given the vintage footage and historical context. Furthermore, the ads touched viewers with Powerful storytelling (Narrative). Krispy Kreme was the only brand that approached the moon landing with humor, which paid off with viewers expressing strong Love It reactions as well. Viewers experienced most of the ads on a sensory level, with signal seen for our Cinematic metric. There were also Prodtastic and Thirsty reactions from viewers among the beer ads indicating any noise from the moon landing tributes did not overshadow the beverages.

Positive Purchase Intent was strongest for Krispy Kreme (66%) followed by Samsung (55%). All the other brands fell short of 50%. However, among beer drinkers top-2 box Purchase Intent jumped to 60% or above for Blue Moon and Budweiser’s ads. 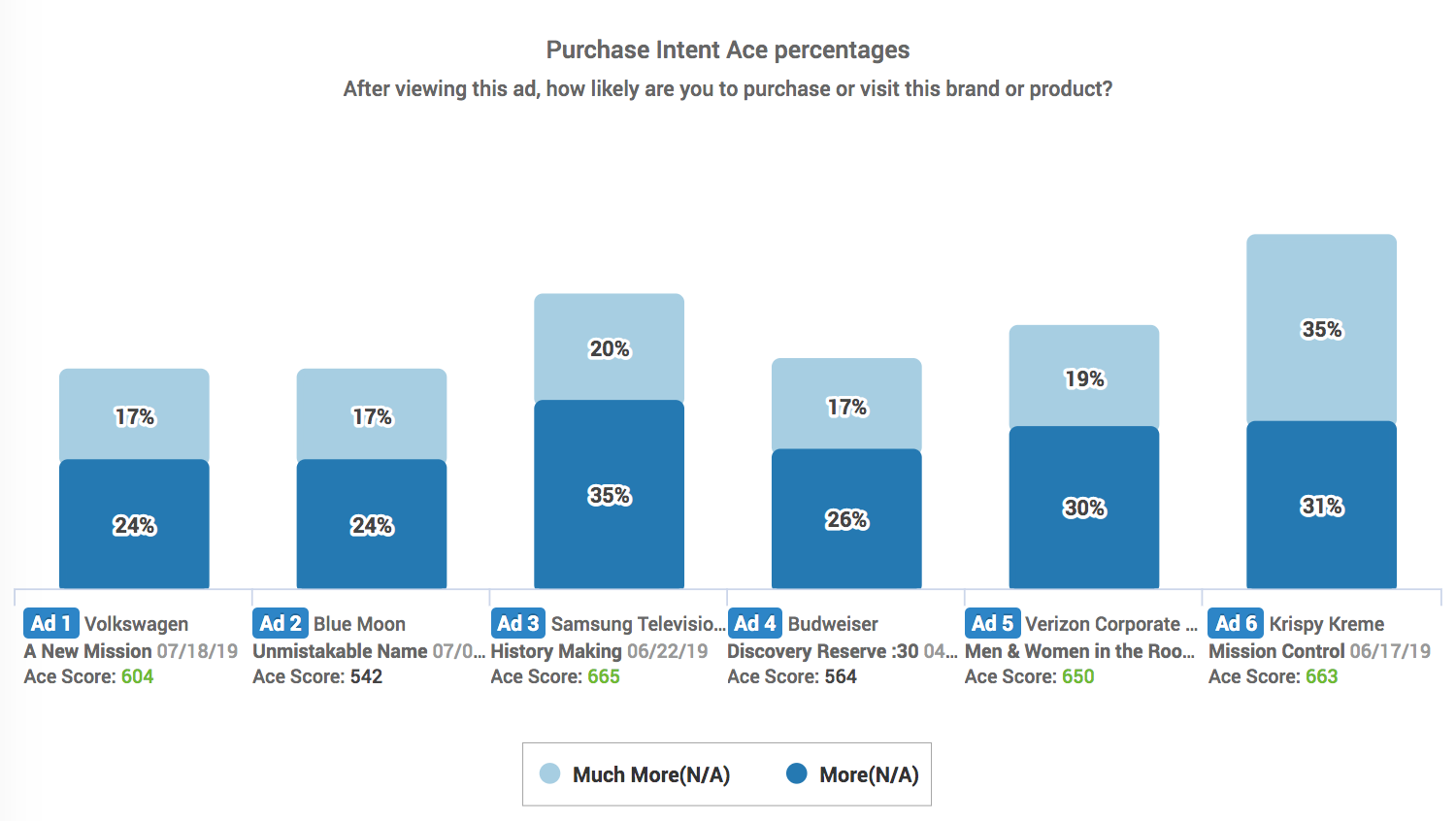 Overall, brands with tributes to the Apollo 11 anniversary were able to captivate viewers’ Attention in a Likeable manner. Many leveraged the moon landing beyond simply entertaining by showcasing new products (or those set to launch in the future). While none of the products directly related to the moon landing itself, creative approaches that tightly wove those products into the Apollo storyline helped to offset irrelevance and drove brand success on a number of metrics.

The Emotions Behind the Most Likeable Back-to-School Ads