The Emotions Behind the Most Likeable Back-to-School Ads

Much to students dismay, the Back-to-School shopping season seems to inch closer to the start of summer vacation each year, with ads airing as early as June 7th. Like last year, most 2019 Back-to-School ads aimed to invoke confidence using youthful energy, colorful visuals and/or powerful messaging.

For viewers with children at home, deals and promotions were lower drivers in this year‘s BTS ads compared to last, as 40% achieved signal on our Value metric vs. nearly 60% in 2018. On top of that, the average strength of signal was weaker this year indicating value propositions broke through less than other creative aspects.

Additionally, parents picked up on convenience more in last year’s crop of ads as brands prominently advertised things like in-store pickup for online orders. This year the only two ads where the convenience advantage stood out to viewers were Yoplait’s “Packing” and Target’s “Easy Shopping,” with the latter’s “School List Assist” connecting with parents the most on our Convenient metric.

The Most Likeable Back-to-School Ads, according to viewers with children at home:

Topping the most Likeable list, GAP captured the confidence of some impressively skilled child musicians in its anthem ad. The music was named the top Single Best Thing and was also the most prominent aspect mentioned in viewer verbatim comments, earning a 10 on our Audio metric. Despite being mesmerizing, the lack of branding and subtle link to back-to-school prevented the ad from hitting on our Convincing metric.

Another ad among the most Likeable that conveyed confidence was Walmart’s “Big Day Back” where product prices were pronounced among larger than life kids. It was among the 40% of BTS ads that scored on our Value metric and earned one of the highest top-2 box purchase intents (69%) among the ten most Likeable above.

This year, Staples targeted viewers’ hearts with emotional appeals and “do good” messaging, whereas last year the brand had a more rational approach with prominent pricing displays and colorful, product forward visuals. These differences are evident in the combined Emo plots below, where 2019’s ads triggered our emotional metrics like Heartfelt, Corporate Responsibility, and Inspiring. Meanwhile, Staples’ ads from 2018 lacked signal in those areas, but instead saw more sensible metrics (Value and Clear & Concise) connect with viewers, as well as those related to the product (Cool, Colorful, Prodtastic): 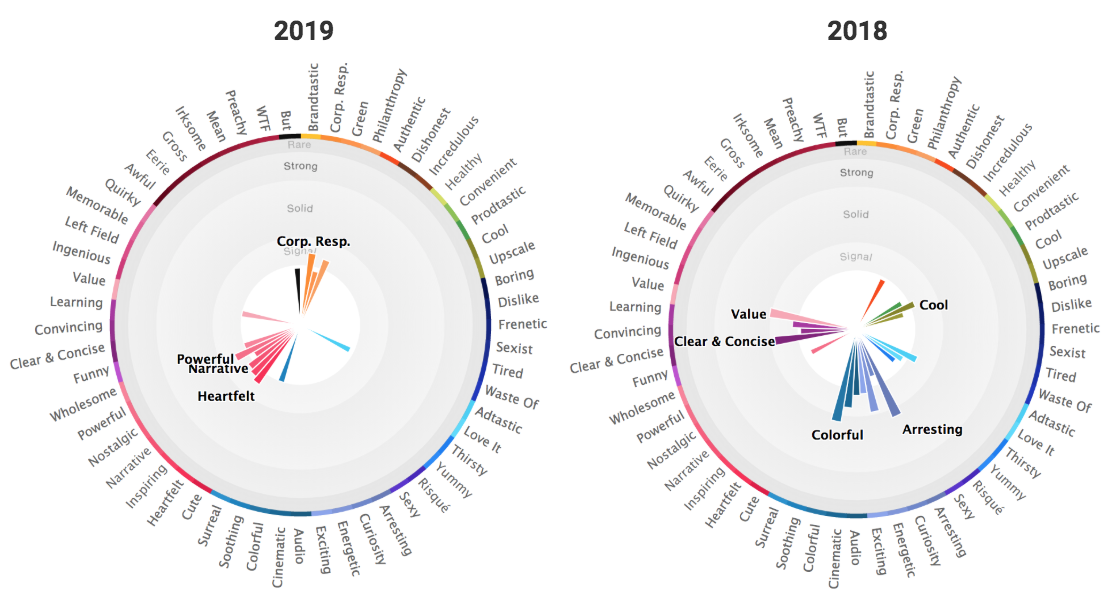 The Coolest ad among the Back-to-School spots this year was “BTS Footwear” from Academy Sports & Outdoor, which scored an 8.8 on our Cool metric. The athletic stunts captivated parents, resulting in strong Breakthrough as well as Exciting scores.

The creative product display in both Post-it ads on the list earned strong scores in Attention, Likeability, and Watchability. The Visual Scenes stood out the most to viewers, ranking as the top Single Best Thing about each. They were also the driving force behind the emotional connection parents formed with the ads, firing signal on metrics like Colorful, Cinematic, Cool and Prodtastic. Despite similarities between the two, parents found “Love Note” more creative (Ingenious) and Arresting while the Audio in “Melody” broke through most for that spot: 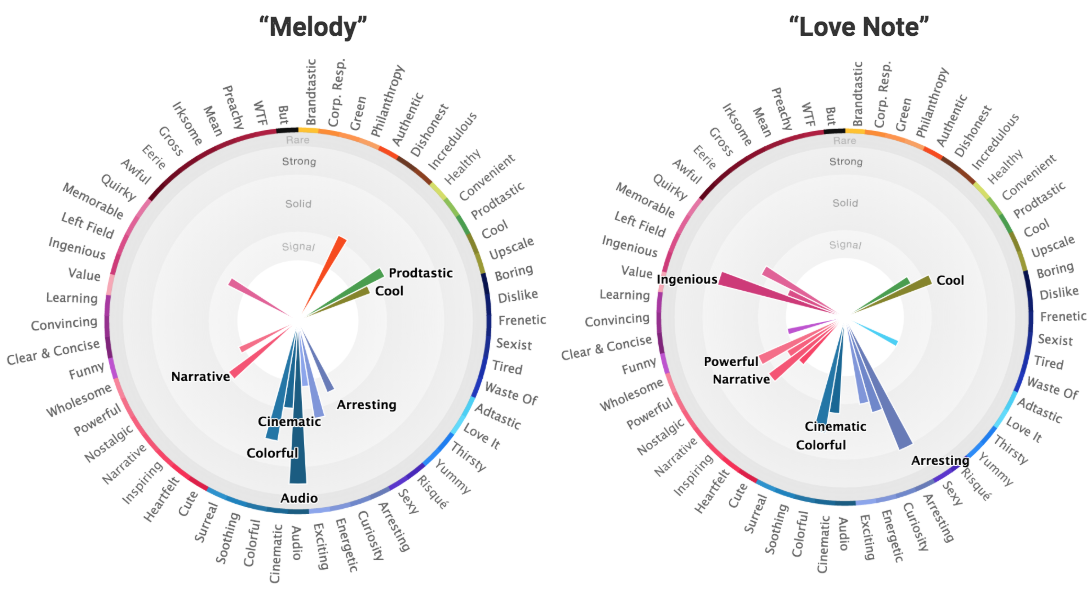 Similar to last year’s seasonal creative, Amazon emphasized the extent of its unique school supplies as well as the ease of finding more obscure products that kids will love. This creative strategy earned Amazon two spots among the most Likeable Back-to-School ads (again).

In “Back-to-School,” Kohl’s featured its school-related products “plus” a slew of deals and offers, including free in-store Amazon returns. The information was relayed in a clear and concise manner that drove scores for every component we measure significantly above norm. The ad also earned the strongest top-2 box purchase intent (70%) among the most Likeable ads.

Congrats to the most Likeable Back-to-School ads!