Brick and mortar retailers continue to fight an uphill battle as shoppers are bombarded with more options, both online and in-stores. Few retailers, however, have had to overcome so many self-inflicted battles as JCPenney has over the last few years. The retailer did an about-face in 2013 in a last ditch attempt to win back customers. Last month, those efforts began to show progress as JCPenney saw lifts in several key sales metrics for the quarter, including the holidays. JCPenney isn’t out of the woods yet, but with the re-launch of the homes division and continued focus on the consumer, it is forging forward. The department store giant has also seen gains in its advertising over the last year and is our Brand to Watch for March.

JCPenney seems to have hit its stride in 2014, with fourteen spots aired to date and a huge presence during the Oscars. The brand is getting back to its core, promoting the sales customers missed under Ron Johnson and re-launching its home department after a drawn out court battle over Martha Stewart. Both of these core traits are resonating with consumers, particularly women.

The top department store ad of the last year belongs to JCPenney, and its promotion for its Appreciation Sale. With only eight Department Store spots breaking 600 in the last twelve months, this is truly an exceptional accomplishment. The brand has actually managed to break that barrier twice in 2014, with the other ad touting its Lots to Love Sale.

“This Sale” drew consumers’ Attention by talking about how finding the perfect fit is important for a woman. The Appreciation Sale angle kept consumers’ Attention and helped drive a strong Change score, 10% above norm. The spot didn’t just focus on the sale, however, it also mentioned some of the key brands that were brought back after Johnson’s departure, such as Arizona.

In the 305 verbatim responses, women reflected on the Change they saw from JCPenney, with both the sales and the clothes that were featured.

The tagline of the recent campaign “When it fits, You feel it” could be used to described the ads that resonate best with consumers. JCPenney is directly appealing to women about what they like about clothing—the way it makes them feel and look. The brand is also looking to appeal to a younger audience after discovering that its shoppers are even older than it had previously thought.

A look at the top ten ads from 2014 shows that when JCP can pull in younger women, the ads score higher. The re-launch of its home store proved popular with all female demographics. Meanwhile those ads that paired a product message with a sale message also performed strongly. Interestingly, the lowest scoring spot in the pack was a :15 spot that touted a sale, but had little other substance.

While JCPenney is certainly on an upswing with its TV advertising, consistency is going to be key for the brand to bring back old customers and entice new ones. The brand’s monthly average Ace Score has varied wildly over the last year. While the category as a whole has also had some variability, JCPenney has more to lose. In order to maximize its media spend, JCPenney should ensure it is putting the most effective creative in front of the appropriate audience every time. 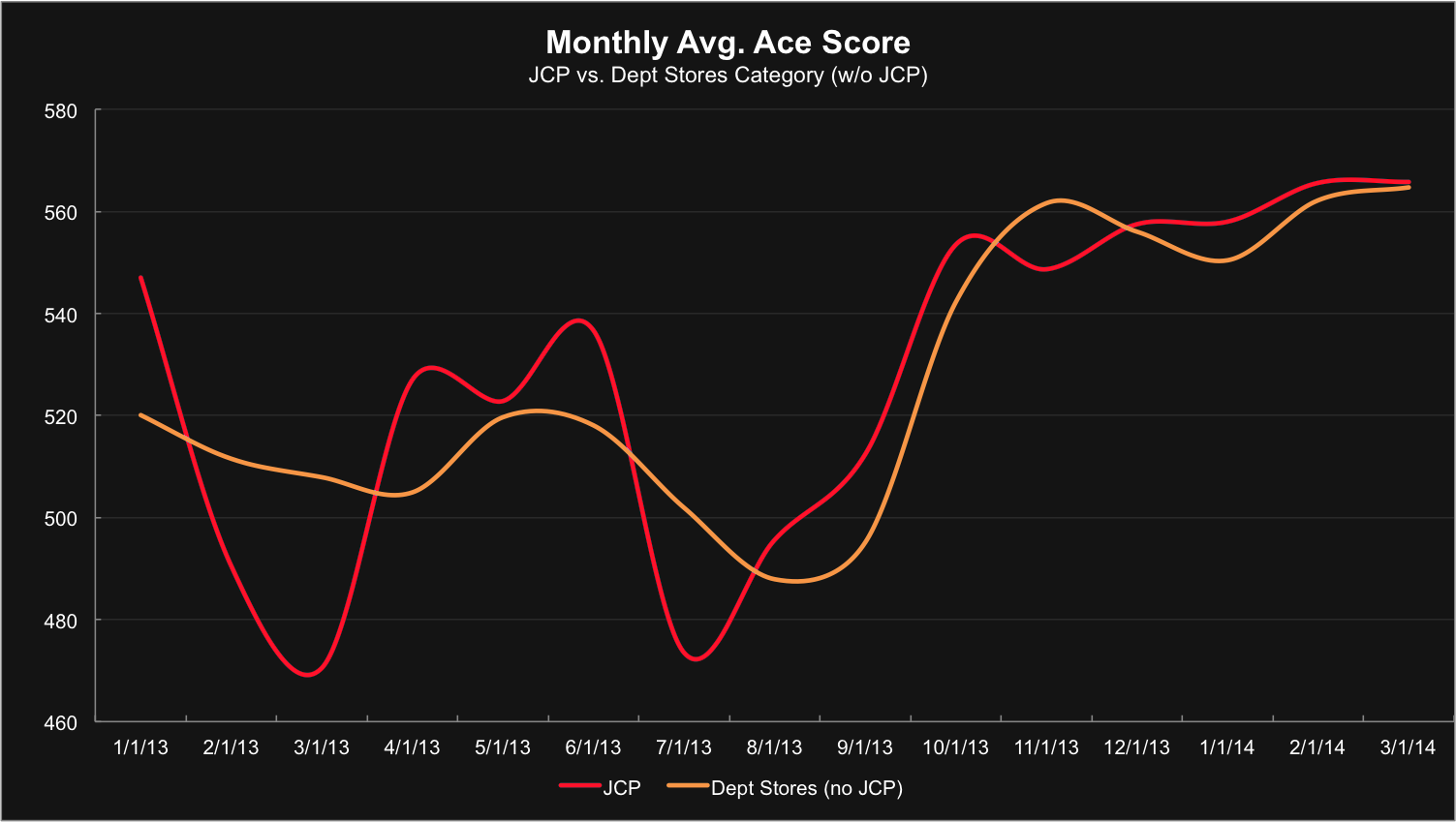 We’re looking forward to watching JCPenney tackle the spring and summer months for fashion as well as the key holidays like Mother’s and Father’s Day. If it can continue to appeal to younger women by mixing fashion-forward products with wallet friendly sales, we should be hearing more good news about the brand come quarter end.

A Stand-out Ad Knows No Length