This is a safe space where we can all agree Burger King’s “Moldy Whopper” doesn’t put us in the mood for a burger…right now.

QSR ads thrive off of food-porn imagery that drives insatiable, instantaneous Desire. Burger King’s Moldy Whopper threw out that rule book. Seemingly crazy on the surface, but ad results indicate there was a different objective than immediate sales. Let us explain, starting with the obvious:

Sanity check — “Moldy Whopper” did not induce instant cravings among gen pop viewers. A Desire score 36% below recent QSR advertising norms translated into weak positive purchase intent among viewers directly after watching. Additionally, 26% of viewers were turned off from purchasing (vs. only 6% for the category norm). 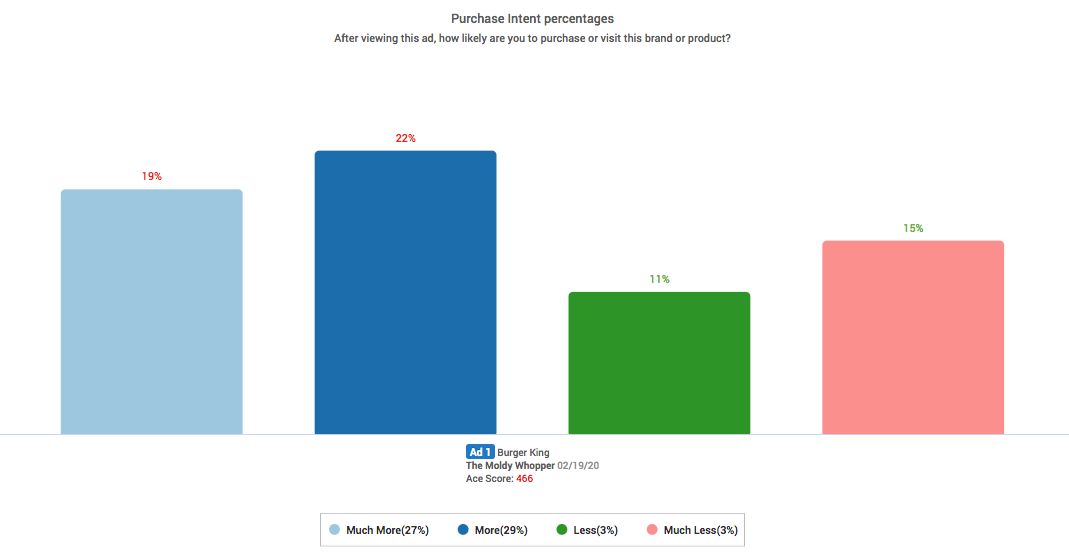 No where is the Moldy Whopper’s repulsing effects more obvious than on Trace, which tracks viewer resonance with ad content on a second-by-second basis. Burger King builds positive interest in the first four seconds with the Whopper’s construction, which eventually trails off as viewers sit and wait unknowingly for the disgusting transformation.

(This drop in engagement indicates vulnerability in skippable ad environments meaning some might not even make it to the moldy part — lucky them).

Unsurprisingly, there’s a staggering drop in resonance at the first sign of rot (19-seconds), with the line trailing into negative territory. A rare occurrence that very few ads generate when content is universally unappealing/a turn off. It’s likely what Burger King was going for, though:

This reaction is echoed in the overwhelmingly negative emotional connection viewers voiced: 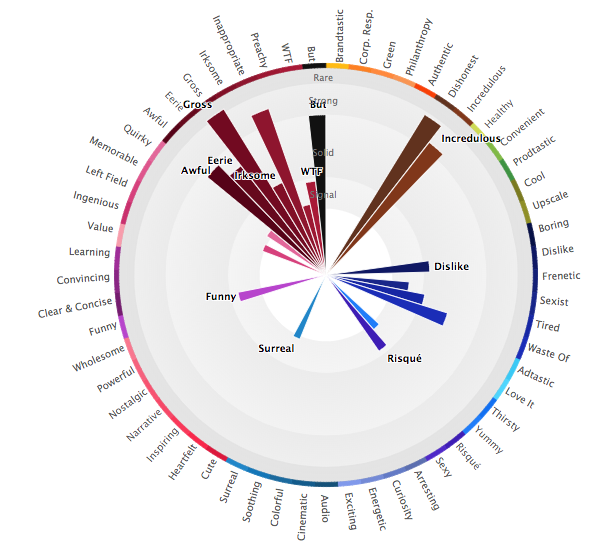 However, this adverse impact is also driving the success behind this ad…

Shock value. Burger King created it with a combination of negative emotions, like Gross, Inappropriate and Incredulous. It’s a sure fire way to capture Attention and “Moldy Whopper” did just that at levels 10% above norm (when it was viewed in its entirety).

With that much Attention, Burger King successfully communicated new Information which was the most favorable element for viewers. The “no preservatives” Message was named the top Single Best Thing about the ad (despite viewers having the option to choose “nothing about this ad”).

The juxtaposition of repulsive visuals with agreeable information played out in the emotional impact on viewers, creating strong internal conflict among many (measured by our But metric in the Emo Profile above). Viewers acknowledged the gross, unappetizing visuals. However, most understood and appreciated the natural decaying effects and the product information it conveyed:

“I’m unlikely to go to burger king as I do not often eat fast-food burgers, but knowing that Burger King is making an effort to only use fresh ingredients in their meals does make me think positively about the company. I might be willing to try Burger King if the opportunity arose.” Female 21-35

“This ad is very surprising, but it makes sense. I guess everything is a tradeoff, so no preservatives means you better eat it in due time. Of course, the burger is meant to be eaten right away, anyhow.” Female 36-49

“It seems like Burger King is moving in a new/healthier direction. The rotting burger was not appealing to me as a customer, but I liked the realness it involved. Also, the music went well with it.” Female 16-20

“It was pretty gross. I appreciate no artificial stuff but it is not an appetizing ad,” Male 21-35

“At first I thought the actual visuals themselves were very unappealing, but the message at the end about Whoppers not having artificial preservatives made the visuals more comforting.” Female 16-20

“The ad was honestly really gross. It did send a very important message about preservatives and it actually would influence me to choose them over others but the ad was gross.” Female 21-35

Furthermore, the Message was so powerful that a handful of viewers (3%) made their own direct comparison to McDonald’s without Burger King doing so anywhere in the ad:

“It was about how the whopper doesn’t contain any artificial preservatives and does decay overtime unlike a mcdonalds burger.” Male 21-35

“Wow, very eye-opening ad directed at McDonalds. I think this will be a good one.” Male 21-35

While it may seem like a mentally scarring image, the HD precision in Burger King’s “Moldy Whopper” will fade in memories overtime. Just take eye-witness accounts. This study from the National Academy of Sciences explains that “eyewitness misidentifications can be characterized as failures of visual perception or memory, the former being seeing things inaccurately, the latter being loss of accuracy or precision in the storage, maintenance, and recall of what was seen.” In other words, our visual memory isn’t as sharp as what we see in the moment.

The part that will make a lasting impression on consumers is the information conveyed. Based on its Attention and Information scores, as well as Strong But signal it’s clear most processed the Message. So, as long as Burger King doesn’t have images of moldy Whoppers near its storefronts this won’t hurt sales in the long run and is likely to help them.