According to the CDC, 1 in 4 US adults live with a disability, whether it’s mobile, cognitive or sensory. But they surely don’t make up that same portion of those portrayed in advertising.

Historically, brands have excluded those with disabilities in their everyday advertising. It seemed there was a specific time and place – the Paralympic Games – to depict someone from this segment, with physical disabilities being the go-to. Otherwise brands might show handicapped veterans around relevant holidays.

However, we’ve seen more brands expand their casting to include those on the autism spectrum to amputees and almost everything in between. Tech brands like Google and Amazon as well as non-tech ones including Target, Nike and the NFL have led the charge (in terms of number of ads) in the past year with the “intensity” of portrayal ranging from simple inclusion to creating an ad centered around the narrative of someone’s disability.

Whatever the intensity, we examined ads dating back to Q1 2019 that represent different disabilities to see how GenPop consumers respond to these inclusive efforts from brands. The matrix chart below provides a visual representation of where each of the ads are positioned in terms of our Cultural Perception measure:

Empower: Take Representation to the Next Level

As evident above, a majority of ads that feature people living with disabilities have a positive impact on GenPop viewers – as measured by Empower. This metric gauges more than a feeling, indicating when an ad’s message inspires, encourages or motivates viewers.

The ten most empowering of these ads leveraged the strongest emotional storytelling, as evident in the Ace EMO heat map below. Inspiration is intrinsic to the personal narrative of anyone living with a disability so it comes as no surprise that all of the top ten hit on this emotion:

These ads beat their category norms on a number of quantitative metrics including Attention, Likeability, Information and Change. Given the focus on personal narratives, the strength of Desire scores depended on how well the product was woven in. The most Empowering ad, Home Depot’s “This is What Our Doers Do,” made the strongest link between the message and the brand:

What starts out like any typical home improvement ad turns into a moving portrayal of Corporate Responsibility. The altruistic message tied into Home Depot’s product offerings giving viewers an Authentic impression of the brand with 64% reporting positive purchase intent (vs. 48% home improvement stores norm). The subject matter was more universal than people living with disabilities, and included veterans and volunteers, which lent towards an extremely Empowering spot on par with just 0.08% of all ads.

While Home Depot’s ad wasn’t solely focused on disabilities, most of the other ads plotted in the “Universal Appeal” quadrant gave more prominence to the subject. There was Nike’s “Justin Gallegos” and Microsoft’s Super Bowl 53 spot “We All Win,” which showcased how its Xbox Adaptive Controller empowers young gamers with disabilities. LinkedIn’s “Push Ahead” told the story of how a deaf job candidate, Aaron, found the right position through the social media site while recruitment platform Indeed applauded the different jobs behind transformational technology for the hearing impaired in “Getting Better.”

To make things clear, if a brand’s ad doesn’t break into our Universal Appeal quadrant it doesn’t mean their efforts were ineffective. Only 12.5% of ads achieve any score on our Empower metric so making it into the Signal band (landing in the Safe Zone) is still more empowering than most.

The ads with more subdued Empower signal had different objectives, which was often evident in lighter approaches that emphasized the product over making a statement about disabilities. Angel Soft’s “Morning Routine” is one clear example where viewers connected to the Heartfelt and Wholesome mother-daughter bond as well as the product (measured by Prodtastic signal), which served as a metaphor for parental love: 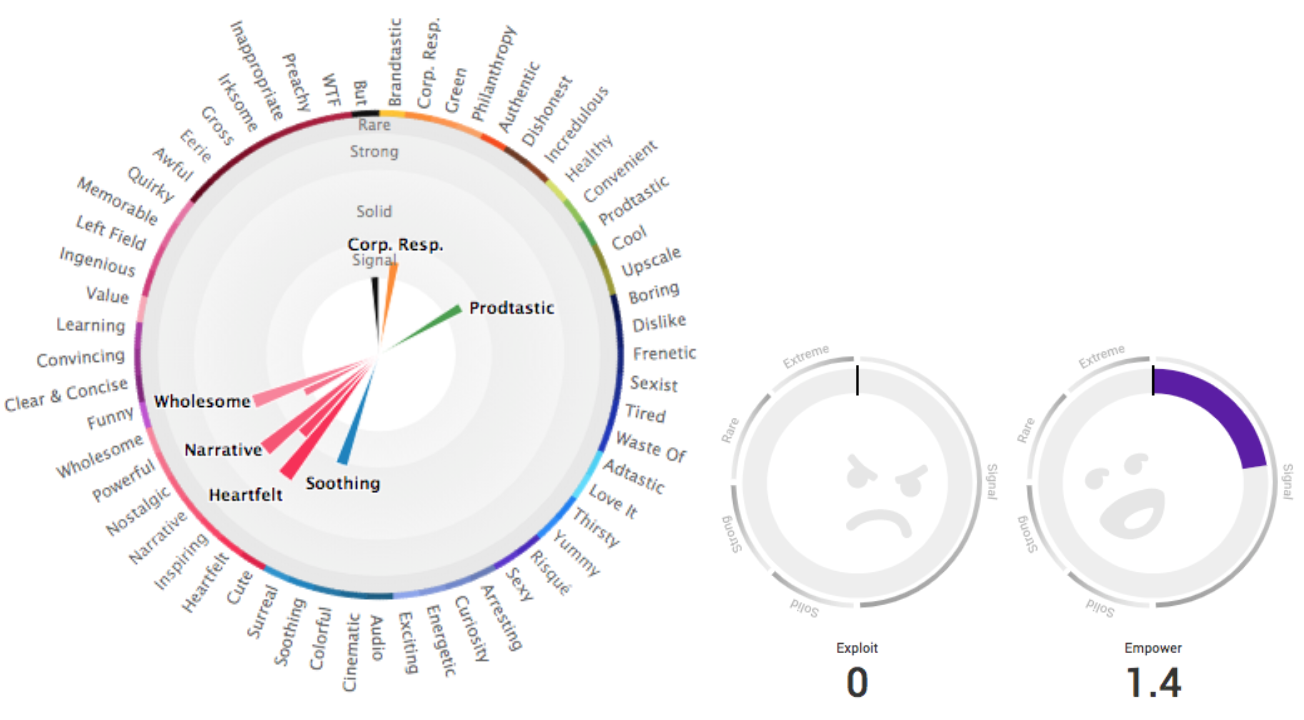 The ad’s message, while heartwarming, wasn’t what drove the Empower score of 1.4. It resulted from the inclusion of a young girl with Down Syndrome, as a sample of viewer comments demonstrate below:

“I like the ad. I think that it promotes positive values while being entertaining and informative. It’s also clear what is being advertised and is not trying to push a political agenda in either direction – a major A+ factor these days!” Male 36-49

“Thank you for featuring a child with Downs. This is a very good ad.” Male 36-49

“I really liked that the ad included someone with different abilities. I’ve worked with Special Olympics and know how capable some of the Downs kids can be.” Female 21-35

For many, playing it safe is what suits the brand and its target audience best. Nine of the ads didn’t register any signal on Empower (or Exploit) indicating that as inclusion and diversity in casting become commonplace, it’ll take more (like a passionate message) to really Empower viewers.

Very few of the 40+ ads plotted above registered a score on our Exploit metric, and most of those that do fall into the weakest band of signal (Signal) — often overshadowed by the level of positive impact viewers expressed. But considering only 12% of all ads score on Exploit, it’s worth analyzing where any negative impact comes from.

In the case of these ads, there wasn’t a common theme. Exploit appeared on an ad-by-ad basis and most instances didn’t arise from the portrayal of disabilities but rather some other cultural or social issue. Among a couple of the Exploit ads, the messenger (brand) tainted the message for a handful of viewers, creating a sense of pandering and ingenuity.

In response to Modelo’s “Victory is Won” and Jockey’s “Finding Purpose,” viewers were more sensitive towards military themes and veterans – something we’ve explored before (How Brands Can Avoid Exploiting Veterans).

In the end, GenPop viewers have shown openness toward ads that portray people with disabilities. The inspiring storytelling ingrained in the subject often lands spots in Universal Appeal territory where almost every viewer is connecting with the cultural message. That said, what works as an empowering message for one brand could come off as pandering for another so it’s always a good idea to test before going to market.