If there is one thing Doritos has proven with their decade-long “Crash the Super Bowl” contest, it’s that great creative can come from anywhere. Super Bowl 50 will mark the last year of the brand’s pioneering advertising contest in which literally anyone with an imagination, a bag of Doritos, and a video camera could enter. Participants vied for the opportunity to see their commercial air on one of advertising’s biggest and most expensive stages, not to mention win a hefty cash prize.

The Doritos contest has left an indelible mark on the advertising industry, proving an effective case study in crowdsourced advertising. The contest saw over 32,000 commercial submissions during its 10-year run and winners were determined by fan vote on the Doritos website prior to the game. While the ads have been wildly popular with voters, they’ve also proved to be among the highest performing Super Bowl ads we’ve tested with consumers.

Let’s look back at the ten highest scoring Doritos Crash the Super Bowl ads since 2010:

We don’t have to tell you that all of these ads had an amazing capacity to make us laugh, but just to prove it, here’s the word cloud built from the words most used in verbatim responses from consumers: 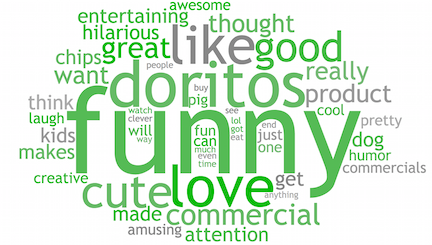 Furthermore, these ads demonstrated broad appeal, as seen in these gender breakdowns. “Pug Attack” has the highest male/female differential, with women giving the ad a chart-topping 682.

Within each age group that comprised the test panels,  a different ad had the highest score:

To understand the key to the success of these ads, we need only to look at a sample of their Ad Personalities, which demonstrate a common strength in the Breakthrough and Product dimensions:

In helping to change the media landscape, the Doritos brand successfully utilized consumer-generated content to deliver compelling Super Bowl ads year after year. Cheers to a great run for the Doritos brand over the last decade!

Follow us on Twitter @Ace_Metrix to see how this year’s Crash the Super Bowl winning ad scores live during the Super Bowl. Register here to join us on Thursday, February 11th for our annual post-game ad wrap-up webinar.

The Most-Liked Ads of Super Bowl 50