If there’s one thing we can count on come game day, it’s an abundance of celebrity power from whistle to whistle. A star-studded cast will surely attend and entertain during the Big Game again this year, but will those who earned large paychecks for a 30 – 90 second part in a Super Bowl ad pay off for advertisers?

While celebrities make appearances in nearly a third of all Super Bowl ads that we’ve tested this decade, only four ads of the top 25 highest scoring ads of the past six years include celebrities. For the most part, each year, we’ve spotted more celebrities hanging out on the bottom of the list than on the top. Of course, there are many factors that contribute to the ad’s position among its peers on such a big day, but it is worth noting that adding Jeff Bridges or Kate Upton to the recipe is certainly no guarantee of an effective (or less effective) ad.

Let’s take a look at the shining stars among Super Bowl ads featuring celebrities. Among the top 25 highest scoring ads of this decade’s games by Ace Score, only four included celebrities – but each may just be an individual lesson in the effective use of celebrities.

Radio Shack generated the fourth highest scoring ad of the 2014 game and the fifth highest scoring for the past six Super Bowls (Ace Score 677.) It’s unusual for a Super Bowl ad to be powered by Change, but “Good Bye 80’s” was just that – after achieving the necessary breakthrough Attention and Likeability. The ad featured not one, but a full cast of characters from the ‘80s to effectively make fun of itself and announce a new launch of the stores. The celebrities in this case – Hulk Hogan, Mary Lou Retton, Alf, Chucky, Cliff from Cheers and a slew of other time-stamped characters were used to parody themselves rather than to endorse the brand or leverage current day celebrity power to earn brand buzz. 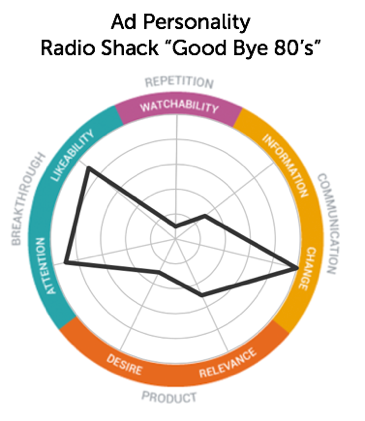 Snickers’ now infamous Super Bowl ad featuring Danny Trejo and Steve Buscemi earned the second highest score in last year’s game (tied with Budweiser’s also infamous “Lost Dog”, Ace Score 652) and 12th among the most effective Game Day ads of the decade. The ad was a continuation of a tried and true Super Bowl campaign, “You’re Not You When You’re Hungry” – which has previously featured Betty White, Roseanne Bar, Richard Lewis and Liza Minnelli, to name a few. A hearty combination of fun-loving humor and brand authenticity, not to mention some killer CGI, make this ad a poster child for the effective use of celebrities. Snickers consistently appeals to its core brand loyalists, evidenced in the strong Desire (695) and top brand recognition scores (85%), but Snicker’s ability to create a memorable ad is clear even among those who don’t care for the bar.

For the past two years, Microsoft has used this big stage to touch our hearts and inspire us with how technology can impact people in extremely positive ways. Last year’s “Braylon O’Neill” leveraged the voice over of musician Common to grab viewer attention and hold it through the heartwarming story of a young boy empowered by Microsoft technology. The ad ranked 6th among 2015 Super Bowl ads and 16th among game ads since 2010. Beyond its Super Bowl caliber breakthrough power, the ad is powered by Information and Change, with viewers admitting they were not aware of Microsoft’s contribution in health areas like these. 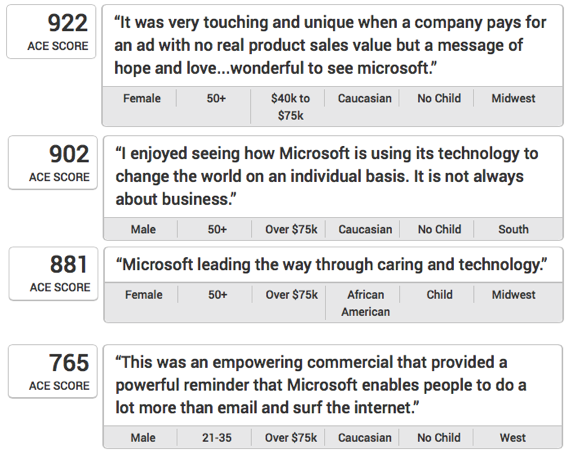 The “Got Milk” team tapped Dwayne “The Rock” Johnson for its Super Bowl debut in 2013, earning the second highest score of the game (Ace Score 644) and the 18th highest scoring Super Bowl ad of the decade. The ad was a bit of a stunner, outperforming beverage behemoths Coca-Cola and Pepsi, as well as the controversial Soda Stream ad that year. Action-packed and full of theatrics, The Rock stayed true to his persona as he ran through the city putting all other heroism on hold until he attained the children’s much needed milk. As is common with these exceptional Super Bowl ads, the ad had high breakthrough component scores, well above the Dairy category norm: 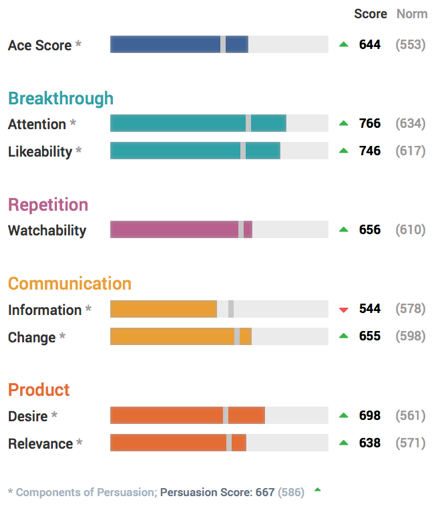 But as alluded to at the top of the post, not all star-lit ads gain MVP status on game day…though we’re not one for public humiliation. Suffice it to say 12 of the 25 lowest scoring ads of the Super Bowls since 2010 include celebrities. Overall, Super Bowl ads without celebrities have performed on average 3.3% better than ads with them– with 2015’s gap widening to 5.2%. Can’t wait to see what’s on the horizon for February 7th.

Interested in more insights on the effective (and ineffective) use of celebrities in advertising – during big stage events like the Super Bowl or every day of the year? Download these Celebrity Insights and contact us for a demonstration of our Ace Metrix LIVE platform.

And don’t forget to  follow @Ace_Metrix on Super Bowl Sunday to see how all of this year’s ads perform.

Automotive Ads Dominate the Super Bowl with the Help of Celebrities