What happens when you combine a beloved character, an endearing story, a product use people find relevant, and an emotive song that ties it all together? You not only wind up with the most-liked ad of the week, but you create a case study in ad effectiveness. Apple’s latest iPhone 6 ad, “Timer”, created by TBWA\Media Arts Lab, achieved this status and here’s why.

The seriously cute tale of Cookie Monster using Siri as his personal assistant through the painstakingly slow cookie-making process delivered on the elements that comprise the breakthrough dimension, Likeability and Attention, achieving scores 21% and 18% above the Mobile Device category norm for each. This, combined with an overall Ace Score of 668 and above norm scores in every component measure, helped the ad garner sought-after “seek and share” status. The Ad Personality below shows that Relevance was also a strong driver for the ad, meaning many viewers were able to relate to the story and the way Cookie Monster was using his phone’s Siri capability.

Another genius tactic employed in this ad was to use a well-known character to tell a story that is engaging and relevant to viewers. The “Characters” were named the Single Best Thing about the Ad by 30% of viewers. If you joined us for our Super Bowl 50 Post-Game Ad Wrap-Up Webinar, you may remember that ads with celebrities, which are not a guarantee for success, saw their best performance in seven years in 2016. We looked at celebrity name resonance within the voice-of-the-viewer comments (verbatims), and Cookie Monster, a known “celebrity” by his own right, exhibits more star power than Drake and Liam Neeson combined.

All kidding aside, another key characteristic of an ad viewers will stop and watch, as well as seek and share, is making an emotional connection. Through this word cloud, comprised of emotional words used in those same viewer verbatims, we see the degree to which this ad struck a chord, particularly through the use of heart (cute, adorable, etc.), humor (funny, hilarious, etc.), and a hook (awesome, clever, amazing, etc.) 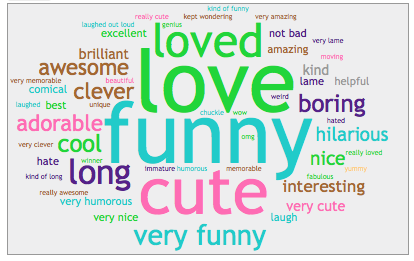 The last of the four key ingredients of an ad destined to outperform all others is high viewer agreement. This is not to say that a polarizing ad that sparks debate won’t be successful, but data shows that high viewer agreement for an ad is more the norm in this area. In combing through the viewer comments about this ad, we see a large degree of overwhelmingly positive feedback from every demographic, with a very low percentage of negative remarks. If only there was a way to measure how polarizing an ad truly is…. actually, tune in to this blog tomorrow, there may be a breakthrough afoot…

Congratulations to Apple and TBWA\Media Arts Lab for creating an ad we’ll be talking about throughout this year as an example of creative excellence.