We are excited to announce the inclusion of a new metric in the Ace Metrix platform. The Polarity Score will further enhance our ability to help advertisers understand how and why video creative works with viewers. This new measure reflects the level of disagreement among respondent Ace Scores, helping to identify how polarizing an ad is, and why it performed the way it did. It shows the extent to which viewers had a common or differing view of the ad.

What is the Polarity Score?

The overall Ace Score is a census weighted average across all our respondents, but Ace Scores at the respondent level can often vary across the whole range of scores from 0 to 950. The Polarity Score reflects this spread of Ace Scores across respondents and measures the level of polarization of a given creative among a target audience.

How does this score help marketers?

High polarization means that there is a lot of disagreement among viewers. By knowing that there are a significant number of viewers scoring the creative low, marketers can look deeper into the reasons for this polarization. For example, there may be emotions where specific visuals disturbed some viewers, or the humor went too far and offended others. By seeing how polarization changes for a given target audience, it can show how your targeting of media will minimize the overall general population polarization. Polarization is often a measure of brand risk, by showing creative is negatively affecting a lot of the viewers, advertisers can assess the size of the negative reaction.

While the Ace Score is a good overall indicator of viewer response to an ad, the Polarity Score shows how that score was achieved. An ad that scores 500 could have a majority of people that all thought it was a 500, or some that thought it was poor and some that loved it. Those instances of disagreement are when the Polarity Score will be useful. By understanding respondent disagreement, advertisers can fine tune their messaging, or fine tune their targeting. Demographic breakdowns and verbatims work in concert with the Polarity Score in understanding the why’s behind an ad’s effectiveness.

What does the picture tell us? 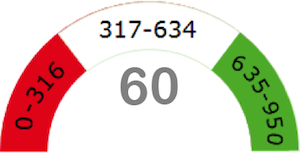 If both red and green areas are large, Polarity is high. If the green section is very large and red minimized, this means polarization is low, with viewers in agreement that the ad is effective.

What does the score tell us?

The score is the level of Polarity among a target audience. The metric ranges from 1-100, but we typically see most ads score between 30 and 70, with the average across all ads around 50. Based on overviews of hundreds of ads, here is how to interpret the scores:

<30-40 Represents very low polarization – there is a lot of agreement across viewers, whether they all agree the ad was great, or awful.

Examples of Low and High Polarity

Apple’s iPhone6 spot “Timer” is an ad with very low Polarity, with the majority of viewers agreeing the spot was fantastic. See yesterday’s blog post about the ad to understand how this low Polarity Score demonstrates its mass appeal, as one of the key pillars of performance.

Mountain Dew’s Super Bowl spot “Puppymonkeybaby” was one that baffled many and greatly amused others, ranking it one of our most polarizing ads to date.

Want to know more about using the Polarity Score as a measure of your video creative? Contact us today.