While you’re still in the midst of summer fun and vacationing, the advertising world is already gearing up for back to school. Target is one of the first advertisers to air a Back to School spot this year, and its high scores show that Target must’ve done its homework. The ad exceeded all norms across the board, especially in terms of Information, to earn this week’s title of Category Overachiever. Likewise, Scott aired an informationally-rich ad to wipe out its competition, earning the highest Ace Score of any ad to debut last week.

Target’s ad “Supplies They Need” came in with an Ace Score of 673, 25% above the 12-month Retail – Discount Stores norm. This A+ for Target brings back a familiar theme for the brand—philanthropy. Target first used a philanthropic edge to its ads during its partnership with FEED last year.

“Supplies They Need” especially resonated with women who scored the ad nearly 18% higher than what men scored it. 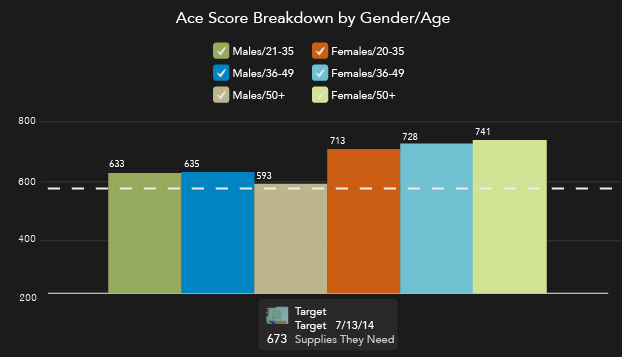 Gender aside, both men and women awarded the ad with Information scores greatly surpassing the category’s 90-day norm. With a score of 722, the Information in this ad, usually lacking in Discount Store ads, came in 23% above norm.

The message of children in need of school supplies really resonated with consumers. In fact, 36% of consumers indicated that the ad’s message was the best thing about the ad. Of the 347 optional comments left for the ad, 9% mentioned helping children in “need” and 7% used the word “help” to discuss the ad’s message. Overall, the verbatim responses aggregated to form an Emotional Sentiment score 35% above Target and the category’s average.

So far, Target is leading the pack when it comes to Back to School ads that have debuted so far this year. But can it stay at the top of the class? We’ll be keeping tabs on brands’ Back to School campaigns, so pay attention, class.

Scott was one of the first brands to manufacture toilet paper that came on a roll. Now, it’s doing away with the inner paper roll altogether, marketing its new toilet paper as being “tube free.” “Save The Tubes” entered our database with the highest score of any ad to debut last week. With an Ace Score of 689, consumers agree with Scott and are ready to ditch the unnecessary tube.

Remarkably, this winning ad has a near-identical gender/age graph to Target’s same graph, with women scoring Scott’s ad 18% higher than what men awarded the ad. 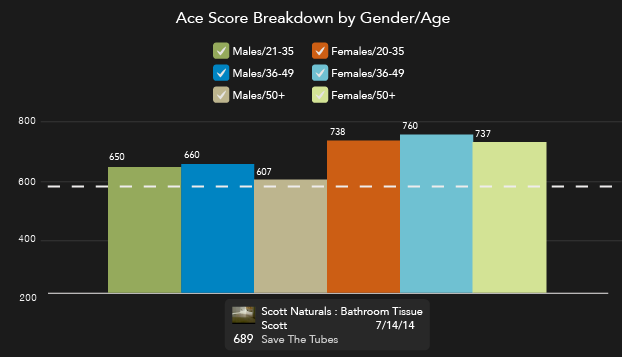 Also, much like the Target ad, Information was the key influencer in the ad’s high score, coming in 29% above the Information 90-day norm.

Aggregating the 331 optional consumer comments into a word cloud, we can get an idea of just how much the tube free toilet people really resonates with consumers. Fifteen percent mentioned how good or great the “idea” of a tube free roll is while other consumers also used words like “interesting” (6%), “waste” (7%) and “informative” (5%) to describe their thoughts and feelings on the ad.

Consumers were split on whether the ad’s message or the actual product was the best thing about the spot with 30% of consumers picking each element equally.

Recess is Over – Get Back to School