Beer is one of the lowest scoring categories in the Ace Metrix database, ranked #25 out of the 33 categories that we track, according to the BLACKBOOK. The category skews to lower scores due to the targeted nature of the product. Not all TV viewers drink alcohol, and not all alcohol drinkers drink beer. In fact, among the nearly 300,000 panelists who have watched beer ads in our surveys (dating back to 2010), some 39% identify themselves as non-beer drinkers. For this non-beer-drinking segment of the audience, beer ads have low relevance and are unlikely to stimulate high desire or likeability scores. This skews beer’s overall advertising effectiveness lower than other, more broadly targeted categories.

Although some beer ads may appeal to broad audiences (think puppies and Clydesdales in Super Bowl ads), the majority of the category’s ads are targeted to beer drinkers. Craft beer makers tend to emphasize their ingredients and brewing process, while domestic and import labels focus on product shots, beer pours and images of people enjoying beer among friends and family. In an effort to understand which creative elements are most effective – and which are used most frequently – we analyzed all beer ads dating back to January 1, 2012, drawing from a menu of eight ad features that are prevalent in the category.

We then looked at overall advertising effectiveness across these eight creative elements. We included only beer drinkers in the score calculations. The scores are shown in Figure 3 below. Note that there’s more than a 50-point difference in average Ace Score between the most effective and least effective ad features. Ads that include a “beer pour” come out on top, closely followed by ads featuring a new product. At the lower end of the ranks are ads employing celebrities and humor. 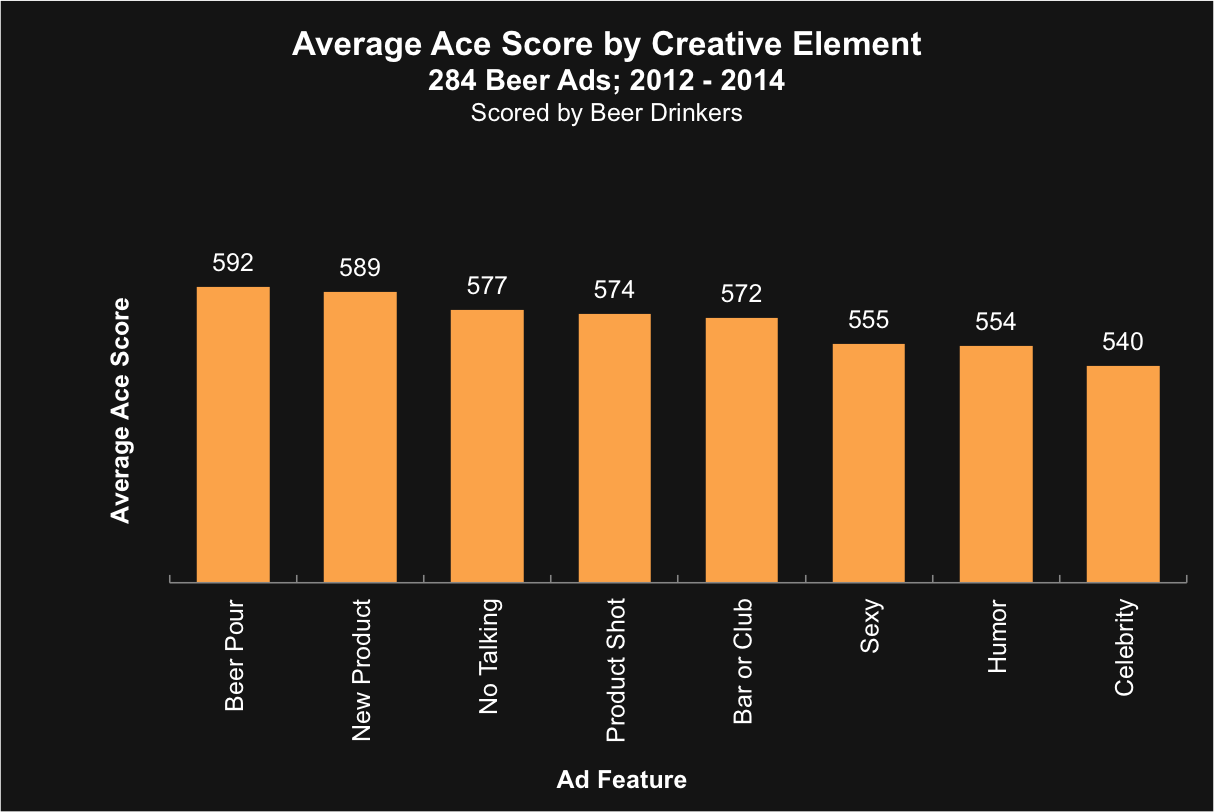 Thematic ad mining is a tool that sheds light on the effectiveness of creative decisions. The exercise may suggest that widely used strategies (e.g., humor) do not always yield the most effective ads. Thematic mining can also be used to discover which demographic audiences find which types of ads most effective. Ads that are scored high by the general population are not always high scoring within a targeted demographic. This case study for beer provides an example of how thematic ad mining can be applied within a selected advertising category.