Given that the ads of the first quarter traditionally raise the creative bar to an otherworldly level, with the Super Bowl and other high visibility events like the Oscars, this quarter we are looking at the ads with the greatest capacity to break through the clutter and be liked. Within our broad set of metrics, the components of Likeabilty and Attention form the Breakthrough dimension. While we recognize that breakthrough is not the primary objective of every ad, for some it is to drive product passion, for others it is to communicate information or change perception, we have seen that it is a quality of a high percentage of award-winning ads.

Out of nearly 1,800 television and digital ads tested by Ace Metrix this quarter, Microsoft’s “Women Made” was the top Breakthrough ad, garnering exceptional scores in Likeabilty (771) and Attention (769.) The ad is part of Microsoft’s campaign called “Make What’s Next”, an effort they launched to encourage girls to enter tech fields, and it was timed to coincide with International Women’s Day. Created by M:United, the ad carried an inspirational and empowering message, resulting in high Breakthrough.

One of our measures, the Single Best Thing about an ad, can help us understand what is driving Breakthrough for the ad. For Microsoft, Walgreen’s, Dick’s Sporting Goods, and Pantene, it is the “Message.” For Doritos, Apple, and Samsung, it’s the “Characters.” The stirring “Visual Scenes” from the Audi and Android ads take that title, and, no surprise, for M&M’s, it’s the “Music.”

“Women Made”: The Top Breakthrough Ad of the Quarter

In a recent blog post about “Save Time”, we discussed the four key characteristics of award-winning ads. Taking a deeper look at Microsoft’s “Women Made”, it also achieves these ideals. As we see in the Ad Personality below, along with high breakthrough, the ad excels at the Communication dimensions, specifically by delivering Information. The ad also exceeds its category norm in every component score.

“Women Made” also makes a strong emotional connection with viewers. Through the word cloud below, comprised of emotional words used in viewer verbatims, we see high emotion in the areas of heart (empowering, inspirational, powerful etc.), and a hook (amazing, interesting, innovative, etc.) Additionally, the ad has a very low Polarity Score of 24, meaning there is agreement across viewers of the ad. For a better understanding of this score, see Introducing the Polarity Score.

View the Top Breakthrough Ads of Q1 in their Entirety:

Honorable Mention Digital Ads
Cheerios “Bring Back the Bees” is a remarkably powerful digital ad explaining importance of supporting bee health by planting wildflowers. Viewers said the “Message” was named the Single Best Thing about the 100 second viral ad by an overwhelming 37%, and the ad’s Polarity Score, 21, is lower than any in the top 10 list. As the Ad Personality below shows, the ad is also strongly powered by Information and Relevance. 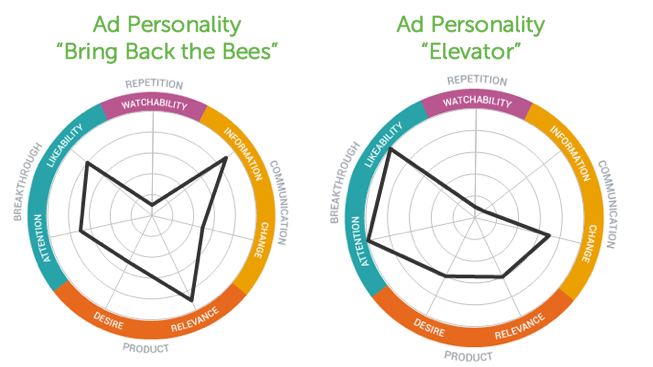 Mike’s Hard Lemonade digital ad “Elevator” also scored well with viewers, coming in just under the top 10 list. In the one-minute ad that earned high marks in Attention, Likeability and Change, summer is recreated in an elevator, as demonstrated by the Ad Personality above.

Want to know more about these breakthrough ads? Contact us today.