Everyone has had a catchy jingle stuck in his or her head, and whether you loved it or hated it, the fact is, you probably still remember it. One of the catchiest jingles from the 1990s came from the mint brand Mentos. Although commercial jingles have become more of a rarity in recent times, generations that grew up with these catchy tunes tend to still remember the song years after the ad has stopped airing.

Mentos created a jingle that many who lived through the ‘90s remember well – an element that may be responsible for this week’s Throwback Thursday ad earning the second highest Ace Score among Mentos ads dating back to 2009. Mentos’ “Freshmaker Suit” recently earned an Ace Score of 592 when rated by a group of today’s consumers.

Of the 500 consumers who scored this vintage ad, 335 left an optional written response. Nine percent of those respondents used the word “love” to describe their thoughts and feelings on the classic ad. Although this ad hasn’t been on the air in 20 years, there are certainly consumers who have fond memories of the Mentos’ “The Freshmaker” ad campaign. 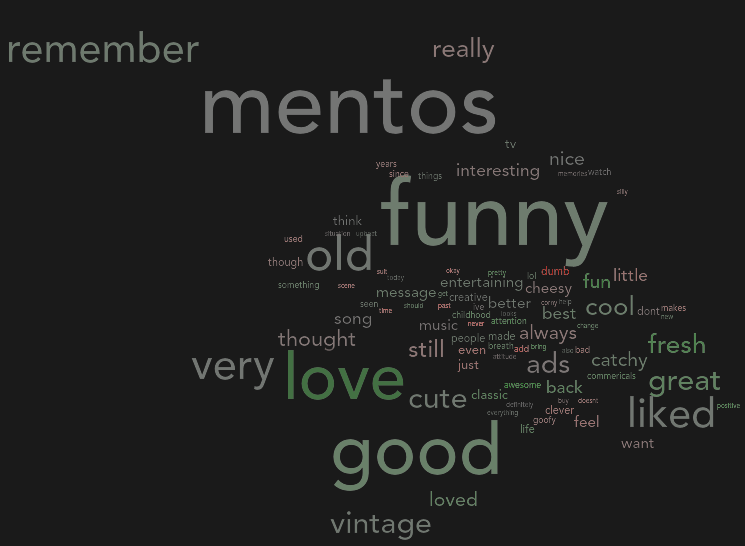 While 13% of consumers mentioned that this ad left them in stitches, it’s not quite as funny as some of Mentos’ more recent commercials. Mentos’ most recent ad, which debuted in March, “Will Not Surrender,” incited 24% of consumers to remark on how “funny” the new ad was.

Still, it is worth noting this classic ad’s Emotional Sentiment score is 38% higher than the brand’s average. This is likely due, in part, to the nostalgia-factor the ad creates with today’s consumers.

Sixty-nine percent of the 500 consumers surveyed had seen this Mentos spot previously. On average, consumers who had seen the ad either when it originally aired, on TV, or online, scored the ad well above 600, which also suggests that nostalgia is influencing the ad’s scores. Consumers who had never seen this Mentos spot before rated the ad below the Candy & Gum norm with an Ace Score of 519. 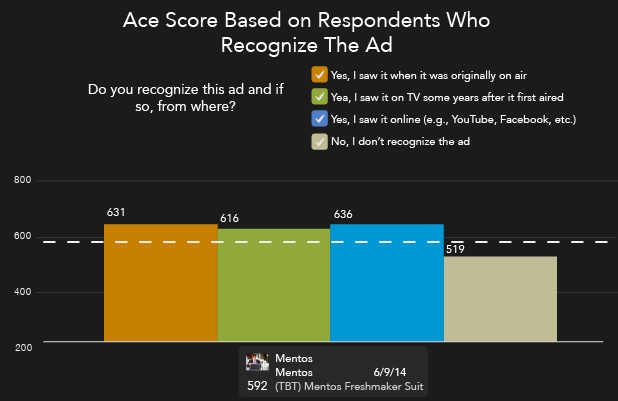 Fifty percent of respondents believed that the ad is better than more recent Mentos ads. The brand recently used a similar, new slogan, “Roll With It,” which has the same sentiment of “The Freshmaker” campaign—simply rolling with whatever life puts in your way. 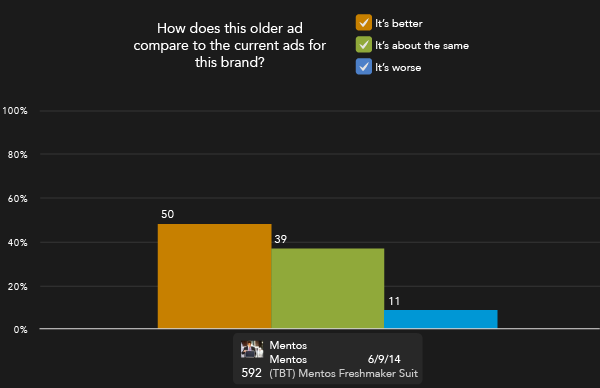 This Throwback Thursday ad found an audience, particularly with the 21-35 crowd as well as women ages 36-49—each group scoring the ad above the current Candy & Gum category norm. A deeper dive into the data may reveal how this ad is able to capture those target demographics that have been somewhat elusive in more current Mentos spots.

While Mentos has updated its humor in recent years, it has stayed rather consistent in its messaging. It is no surprise then that 89% of consumers felt that this throwback ad still represented Mentos’ core brand values today.

Reach out to us on Twitter to suggest your favorite throwback ads for next Thursday’s #TBT.

The Heart of a Lion