Although retail advertising makes up nearly 20% of total ad volume, it’s been a few months since any retail ads have made an appearance on our Ads of the Week list. Luckily, PetSmart debuted a furry philanthropic spot that leaped ahead of other ads to become this week’s Category Overachiever. Likewise, Tide aired a high scoring ad for its new product, Tide Oxi, which comes with a catchy hashtag. #TideThat

PetSmart’s “Pet Adoption” has two attributes known to have a strong impact with consumers: animals and philanthropy. The ad earned an Ace Score of 667, 29% above the Other Retail Stores 12-month category norm.

Pet owners were especially friendly toward “Pet Adoptions,” with each pet owner group scoring the ad above 700. Conversely, non-pet owners made up 28% of the sample and scored the ad just 12 points below the Other Retail Stores 90-day norm. 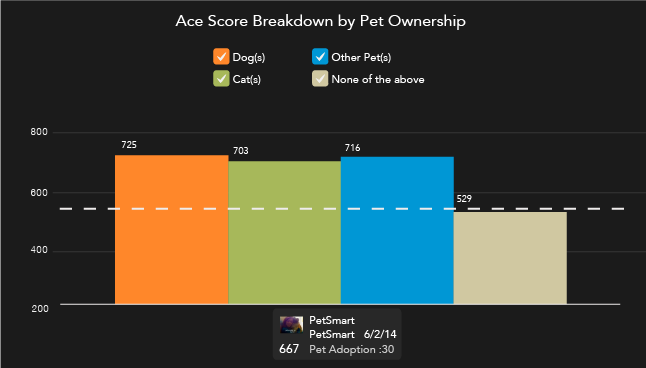 Regardless of the consumers’ age or gender, all demographics scored the ad well-above the norm for Other Retail Stores. Women ages 50+ rated the ad the highest with an Ace Score of 722. 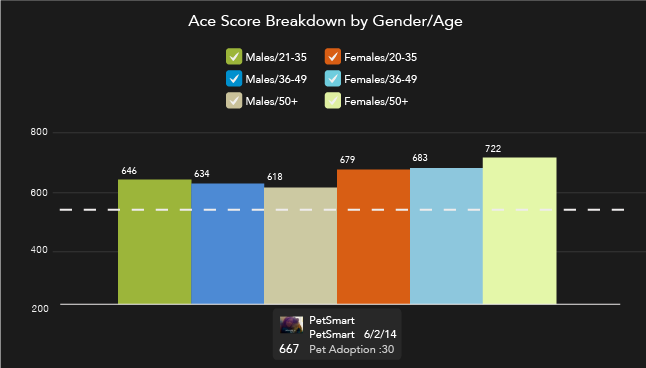 In addition to high Likeability and Attention, something you might expect from ads filled with furry friends, the Relevance score soared more than 26% above norm.

The spot’s Emotional Sentiment index was 25% above the PetSmart norm. The emotional sentiment of the ad can be found in the optional verbatims where 9% of the comments used the word “love.” Another 5% discussed the ad’s sense of “community” and 5% used the word “cute.

Overall, consumers appreciated PetSmart’s diligence in giving back and helping animals who are in need of a home. While any animal-focused programming may be the obvious choice for this ad’s media buy, looking at the demographic data, it appears that a much wider range of programming would fit the ad’s message.

Tide’s latest ad, “More Than 225 Uses: Jonathan Scott,” achieved an Ace Score of 695, beating out 109 other Ad of the Week contenders for highest Ace Score.

Women saw more relevance and applications with Tide Oxi, and it showed in the scoring with females rating the ad 9% higher than their male counterparts. 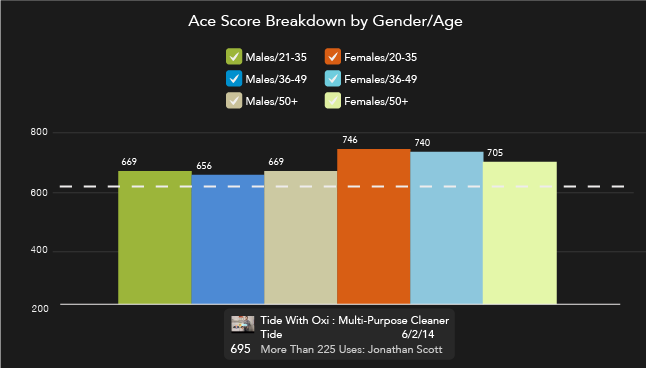 The ad achieved 700+ scores on all six metrics of Persuasion. However, the ad’s Watchability score, while still well above norm, kept the ad from breaking into the elusive group of ads that score above 700. Either way, the ad’s ability to relay Information and convey Change is notable, scoring 14% and 11% above the 90-day norm, respectively.

After the word “good,” Tide got the biggest shout out from the optional verbatims with 20% mentioning the brand’s name. Likewise, consumers appreciated the “informative” (6%) and “interesting” (5%) nature of this ad.

While the ad does skew female, men still found the ad highly informative and convincing—appreciating the product demonstration. Therefore, when it comes to media buys, this ad is prime to air during female- or male-targeted programming.

Ad Advice: How to Spend Father’s Day with Dad