In May the number of breaking COVID-19 ads started to wane with the weekly volume at the end down 18% compared to April’s month-end. Simultaneously, as all 50 states worked through their independent reopenings, COVID-19 ads shifted away from once popular themes, like philanthropy and “Thank you” messaging, towards ushering in the “new normal.” Part of that new trend includes ads that promote safety measures such as wearing masks, sanitizing surfaces, offering contactless payment and limiting in-store capacity.

We took a closer look at some of the recent “reopening” ads across a number of industries to see how viewers responded to these efforts, uncovering the following insights:

At the start of lockdowns, Burger King was the first to air ads addressing COVID-19 safety measures, like contactless payment. Other QSR brands followed suit in the weeks after, like Papa John’s, Dominos & Little Caesar’s all stating that their pizzas are not touched once they come out of the oven.  With no need to “reopen,” it seems most QSR brands are past the point of reassurance and have moved on to product promotions like McDonald’s “More than” campaign.

Not so for sit-down restaurants that are just dusting off their tables and chairs. Olive Garden, which had the luxury to stay open with curbside pickup, welcomed back customers into more than 65% of its dining rooms by the end of May. It’s the only dine-in restaurant that has advertised its reopening with scenes of sanitizing and safe food preparation in lieu of tantalizing food close-ups and information about deals:

In this case, it seems the “new normal” deterred viewers as “Getting Ready” underperformed 1-year Olive Garden advertising norms. Due to a lack of food visuals and/or promotions, the most damage was done to the Information (12% below norm) and Desire scores (-10%). This also translated into weak top-2 box purchase intent at 57% (vs. 64% 1-year Olive Garden norm). Among those that reported increased purchase intent, 32% mentioned “safety” aspects as well as “reopening” in their verbatim comments – a majority of which were positive:

“very calming and reassuring. like that there was a lot of sanitizing. knew who the ad was as soon as i saw the plastic bowl for the unlimited salad that is offered” Female 50+

“showing how they are approaching the re-opening of the business is comforting.” Male 36-49

In regards to masks specifically, only 4% of viewers mentioned the artifact in their comments, with sentiment divided between positive and negative. On top of that, some viewers wished to see more emphasis on the food and suggested cleanliness was overemphasized:

“I think it was too long and overdramatic. I liked the part where the food starts getting chopped, just not all the cleaning stuff. I understand why they did that, it’s just that the visuals of food is what gets people to want to go there.” Female 50+

“I love Olive Garden and I knew it was an Olive Garden ad once I saw the salads. they should focus more on the foods. The changes in prep don’t really make me want to go eat there. it makes me feel safer if i do, but it doesn’t make me crave a tour of Italy.” Male 36-49

“I think more focus should have been on the food. I’m so tired of seeing all these companies cleaning. I know darn well, they will not keep up with cleaning to that extent once they reopen so no need to throw it on thick like they are.” Female 36-49

Recently, the “reopening” theme has been prevalent among retail ads. In fact, about 42% of COVID-19 retail ads featured characters wearing masks. The more direct brands were in pointing out safety measures the more viewers responded to them via verbatims. As was the case for recent ads from Lowe’s, Kohl’s and Macy’s, where 44%, 42% and 32% of respective viewer verbatim comments referenced “safety measures” or “reopening.”

Macy’s was the earliest of the three brands to extensively address safety protocols with “Welcome Back,” which aired May 26th. Thirty-two percent of viewer comments reflected on the safety precautions advertised – a majority of which welcomed the information or felt neutral. Given the air date (before some states reopened and nationwide protests), any negative sentiment towards the “reopening” theme mainly had to do with viewers feeling it was “too soon” to open:

“world cases are still on the rise at the time I am seeing this ad. it is bad taste to encourage in-store nonessential shopping.” Female 36-49

Those concerns seemed to fade from responses with time as only one viewer expressed hesitation in regards to Kohl’s reopening ad on May 31st and zero for Lowe’s safety-oriented ad on June 7th. Similar to Macy’s, a vast majority of viewers that commented on the safety measures outlined in these ads felt positive or neutral towards the move.

Other retail brands were more subtle in communicating safety measures. Most of which simply featured people wearing masks or gloves while focusing on products or emotional appeals. These minimal safety efforts stood out enough to a small portion of viewers (6% on average) that referenced things like “masks” and “gloves” in their verbatim comments. Instead, the product-forward aspects stood out more to viewers with these ads often registering signal on Prodtastic, Convenient and/or Value metrics.

Across the retail ads analyzed, scores either overperformed or hovered around industry norms – the extent to which brands emphasized safety precautions had no net effect on ad performance.

As one of the hardest hit industries due to lockdowns and health concerns, travel ads seem to benefit the most from communicating safety measures compared to restaurant and retail ads.

Airlines were quick to address flying safety concerns early on with ads covering HEPA filters, enhanced cleaning procedures and other practices. Compared to other airline ads that aired during the same time and made heartfelt appeals, these “safety measure” ads outperformed across most, if not all, component measures and generated much stronger top-2 box purchase intent (“safety measure” ads are #1-6 in the chart below):

Each had its own strengths in terms of component measures. For “Now Open!” the theatrical visuals drove strong Attention and greater Likeability than the safety messaging behind “Let’s Be #VegasSmart,” which signaled more of a Change to viewers. However, Relevance and Desire scores for both underperformed compared to travel industry norms as viewer comments expressed hesitancy about the reopening in both ads.

The inclusion of masks and other safety measures in “Let’s Be #VegasSmart” earned kudos from viewers and deflected some (but not all) of the negative reactions towards the timing. It also helped generate positive rapport in terms of Cultural Perception, with a higher score on Empower than Exploit. Despite the polarization of masks in the media, 85% of viewers that mentioned them in comments about “Let’s Be #VegasSmart” felt either neutral or positive towards the inclusion. 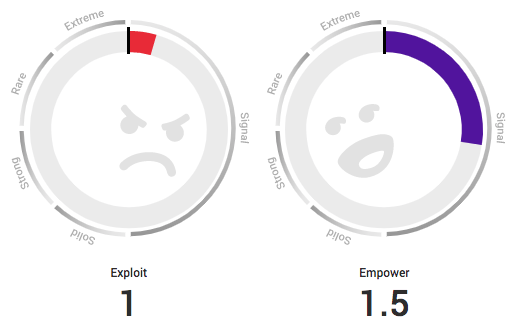 “Now Open!” was neither Empowering or Exploitative. But without the precautions, more viewers raised concerns about the timing and potential consequences than they did for “Let’s Be #VegasSmart”:

“love las vegas, but safety first over anything right now with covid19, not looking forward to travel anywhere soon” Female 21-35

“it’s terrible. They are aware there’s a pandemic on, right? unless all those casinos are enforcing mask wearing and social distancing, there is no way I would ever go there.” Female 36-49

At this time, the inclusion of safety measures in ads does not turn off gen pop consumers. While some ads solely focused on these efforts, viewers still got the impression of safety from more subtle ads that simply featured a mask or gloves. However, safety measures were not a make or break selling point even though viewers often appreciated the reassurance.

Additionally, there’s early indications of wear out among a marginal portion of viewers, which could be exacerbated the more ads that follow suit. Moving forward with reopening, viewers want to be enticed by ads, whether that’s through the product, emotional connection or deals/promotions.