Four weeks into the protests that erupted after the killing of George Floyd, nationwide conversations about racism, systemic oppression and police reform are still front and center. Nike was the first brand out of the gate with an ad addressing racial matters (“For Once, Don’t Do It”) on May 29th – we revealed how consumers responded to the spot. Since then Procter & Gamble, YouTube, Disney, JP Morgan Chase and McDonald’s have come forward with ads in support of the Black Lives Matter movement.

Given the contentious atmosphere surrounding the Black Lives Matter movement, all of these brands likely understood they were wading into divisive territory. In terms of Cultural Perception, most of their ads were perceived as equally Empowering as they were Exploitative. However, two – P&G and YouTube – landed in the “Danger Zone,” where the messaging’s risk outweighs the reward: 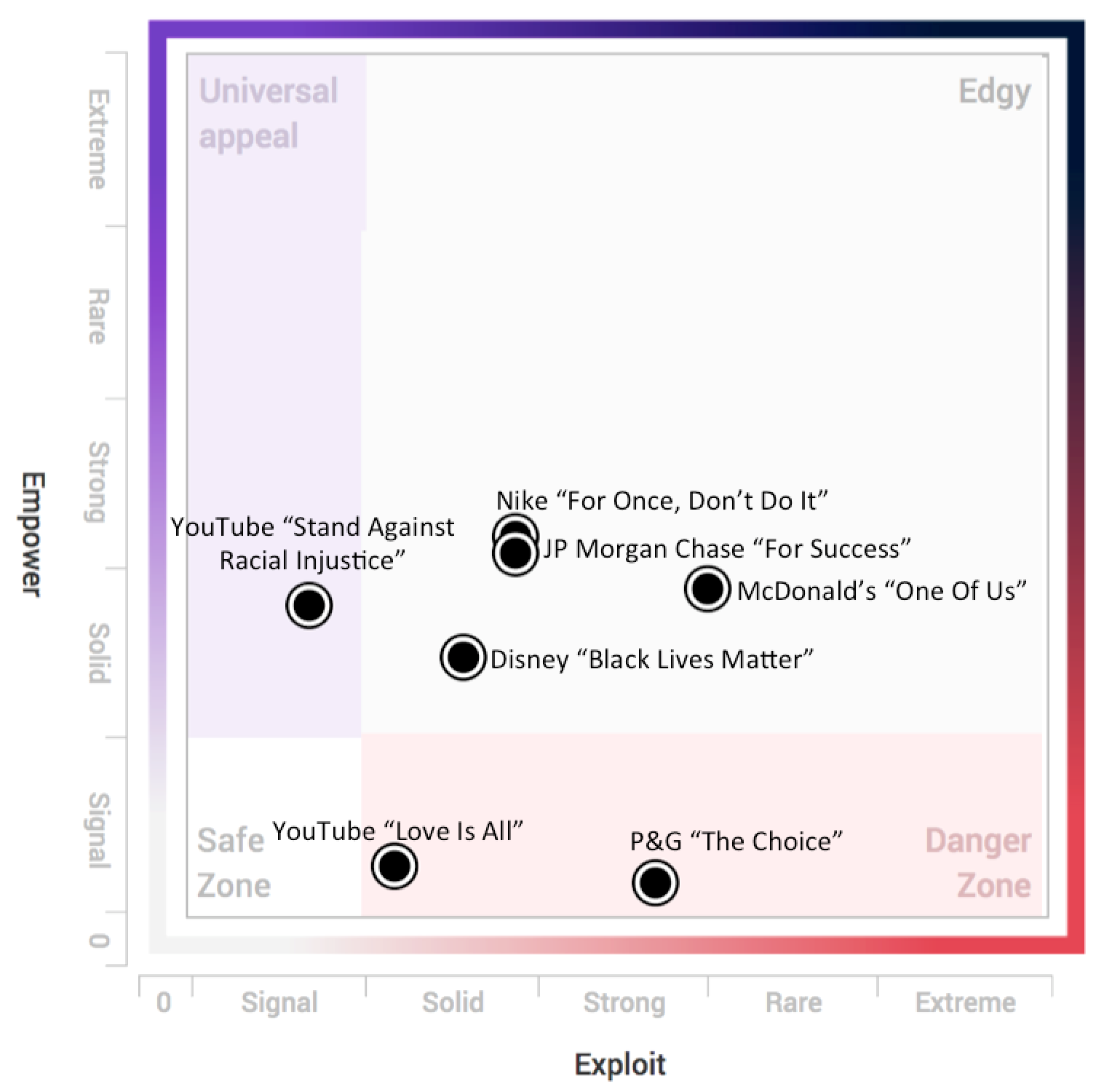 This dichotomous cultural perception isn’t solely driven by party lines or those that stand with- versus against-Black Lives Matter. In other words, viewers across the political and BLM spectrum perceive these ads as either Exploitative or Empowering. The magnitude of the movement this time around is hard for brands to ignore as some consumers are calling on them to speak up. As these early ads indicate, the wide range of perspectives will prove challenging for brands, with stronger stances heightening both the risks and rewards of addressing the matter of racism.

Both McDonald’s and P&G have advocated diversity and race issues in previous ads – most notably P&G’s “The Talk” – which put them in a position to take bolder stances on the Black Lives Matter movement than others, and that they did. In “One of Us,” McDonald’s listed the names of recent black victims (including George Floyd), explained how it is personally affected by recent events, and pledged donations to related organizations. Meanwhile P&G’s “The Choice” pointed the finger at (white) viewers and encouraged strong calls-to-action, like being “anti-racist,” donating and voting.

“One of Us” was perceived as “Edgy” among Gen Pop viewers (aged 21-50+), which is a result of high levels of Exploit and Empower. Ads that fall in this category – including several other recent Black Lives Matter ads – are those that push the boundaries of purpose-driven advertising. McDonald’s “One of Us” joined the ranks of Gillette’s “We Believe: The Best Men Can Be,” Google’s “Equal Rights” and others that challenge the status quo.

In “One of Us,” McDonald’s spoke for itself by discussing its values as a brand and what it is doing to support the cause. Owning up to its own responsibility made a positive impression on viewers, 57% of whom named the Message the Single Best Thing about the ad, and contributed to its strong Empower scores across age and gender: 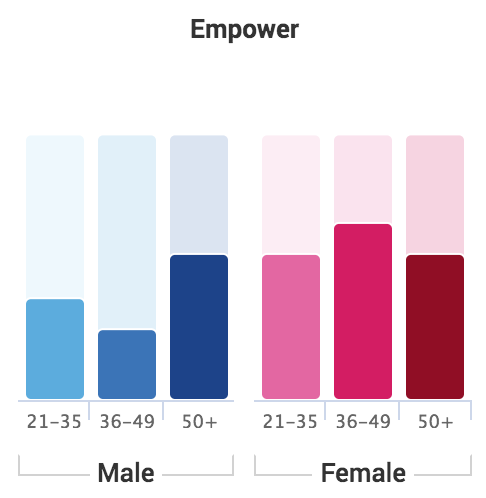 “I like that McDonalds is taking a stand. I appreciate that they both show how this issue specifically relates to them but also shows how the message applies on a global scale.” Female 21-35 [Support BLM]

“I am totally in support of the content of this ad. If every company took a stand like this, change might happen. I don’t even like McDonald’s that much, but it makes me want to support McD’s when I see language like that.” Female 50+ [Support BLM]

However, “One of Us” also was the highest scoring on Exploit – falling in the Rare band of signal, which historically only .1% of all ads have ever done. Those that disagree with the cause contributed to that reaction, but also those in support raised red flags (which was consistent across all of the Black Lives Matter ads). Viewers from both standpoints took issue with the timing as it seemed like the ad was a response to tragic events rather than a genuine stance. Like with Nike, others turned the microscope on McDonald’s and its track record. Lastly, a few even scrutinized the nonprofits McDonald’s was donating to or wanted to know how much since the amount was unspecified: 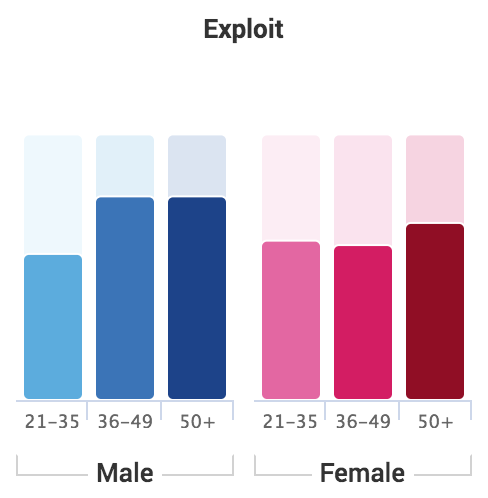 “A good and timely message that is highly relevant and would be better received IMO if the company promoting it had a better record of treating their employees fairly. Seems hypocritical to a large extent and undermines the strength of the civic and social justice message implied by their donations and overall verbal support.” Male 50+ [Support BLM]

“I hate the opportunistic feel of this ad. I do not like the thought of capitalizing on tragedy. I also do not support the NAACP at all. There are much better organizations to donate to that will actually use the money more effectively to meet needs and correct problems. I detest this ad.” Male 50+ [Support BLM]

“McDonald’s waited until it was more socially acceptable with mainstream America to admit that they support Black Lives Matter. The message would have been more powerful when Kaepernick was getting slammed for just kneeling.” Female 21-35 [Support BLM]

When it came to P&G’s “The Choice,” viewers found it almost as Exploitative as “One of Us,” but it barely broke the threshold of Empower signal (scoring starts at 1.0). That said, historically only 12.5% of all ads have scored on Empower so P&G’s 1.2 still indicates some viewers received its stance as a positive contribution to the movement (as shown in verbatim comments further below):

“Black lives matter and we need to all speak up and stand up so this can hold police accountable for the unnecessary killing of black people.” Female 21-35 [Support BLM]

“It is a simple yet powerful reminder of the meaning of “Black Lives Matter” and speaks to whites about how they can be a pro active voice that gives real meaning to that phrase by standing firmly against racism and indifference to racism.” Male 50+ [Support BLM]

“I think this ad is a good way to get people to think about an important issue that has been needing our attention for so long.” Female 36-49 [Support BLM]

What drove viewers away from feeling empowered by “The Choice,” and actually contributed to Exploit signal, was a perceived negative tone and divisive intentions:

“I’m all for solidarity but this commercial is just drawing people apart. This is very divisive. The message about being white and not having your life matter is just asking for people to take offense and draw people further apart on this issue. We should be coming together on this issue, not trying to insinuate that this is the fault of all white people because that’s how the ad makes it sound. This ad is only going to cause further divide in the country.” Female 36-49 [Support BLM]

“very depressing, hits you in the face of a problem that is not easy to understand or fix” Female 50+ [Support BLM]

“I do not like this ad, as a white person it feels like you are attacking me for not rioting or something.” Female 21-35 [Against BLM]

However, the real difference between the Empower score for McDonalds versus P&G lies in their approaches. McDonald’s shared its values as an organization and took action on its own whereas P&G pushed its stance with calls-to-action that shifted responsibility from the brand to the viewer:

“I think forcing people to take political sides, and punishing those who choose no engagement is unAmerican.” Male 36-49 [Support BLM]

“I’m skeptical about what P&G is actually going to do about racial discrimination within its ranks and in the world, but I like that its consumers know where the company stands” Female 50+ [Support BLM]

“I didn’t care for this ad. I don’t mind if people want to stand for what they believe in but I don’t think companies should try and push people one way or another.” Female 21-35 [Support BLM]

The difference in Cultural Perception scores between McDonald’s and P&G’s ads attests to the challenges that come with taking a stand during the current social climate. That said, brands can mitigate some of that risk by focusing messaging on its own values and actions in a way that does not come off as domineering to viewers.

It’s very likely that a brand’s initial stance on the matter will drive some backlash as viewers will perceive the messaging as a way to cash in on current events. But those brands that do decide to speak up now against racism should stay the course and carry on the conversation into future advertising as an ongoing effort to prove their dedication.

Furthermore, Black Lives Matter can have a polarizing impact not just between opposing sides, but also within those that support the movement. Brands that opted for a more subtle stance, like JP Morgan Chase and Disney, generated less Exploit signal and alienated fewer consumers.