Samsung’s much-anticipated release of the Galaxy S5 comes with a new ad and jaw-dropping Ace Score. In the process the ad earns the rare “double,” meaning that it took the award for the highest absolute Ace Score and the highest Ace Score relative to its peers. In yet another first for the esteemed marketer, it became the first brand to produce two scores north of 700. The new ad, “Makes Everyday Better” delivers vintage Samsung effectiveness, artfully incorporating information about the phone into a highly visual and relatable product demonstration.

The 60-second ad also usurped the overall number one spot in Mobile Devices from none other than Apple, whose 2010 commercial “FaceTime” has an Ace Score of 696.

“Makes Everyday Better” captures both the title of Category Overachiever and Top Ace Score for our 17th Ad of the Week of the year. With an Ace Score of 715, the Galaxy S5 ad has a score nearly 28% higher than the Mobile Devices 12-month category norm.

The highest scoring gender/age demographic is males ages 36-49. However, overall, females still scored the ad 4% higher than what men awarded the spot. 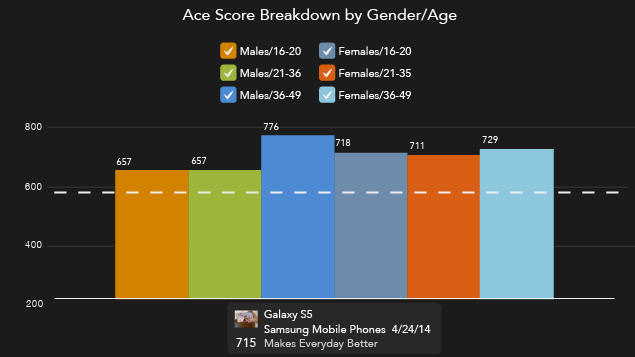 In a rare sight, “Makes Everyday Better” exceeded the 700 mark for each of the six components. However, its score in Information is most astounding—at 762, that score is 21% above the Information category norm for the last 90 days. These are the hallmarks of an extraordinary product demonstration, but just as interesting is the towering scores for Desire and Relevance—blowing away the category norm.

While the Galaxy S5’s camera was given much of the ad’s airtime, the phone’s water resistance really grabbed consumers’ attention. (However, many of our survey respondents mistook the feature to be “waterproof.” For those of you who have taken a swim with any “water resistant” electronic in your pocket, you know there’s a difference.)

Six percent of the 338 consumers who left an optional survey response mentioned how the phone is “waterproof,” most of them were women 36-49. The male counterpart of that age group, also the gender/age group who rated the ad the highest, was the biggest user of the word “very.” Those consumers were “very” ecstatic about the phone’s features.

Just clicking on the “very” responses we see a word cloud that screams information:

As you may have noticed watching the ad, Samsung briefly compared the Galaxy S5’s camera to the Apple’s iPhone camera. Samsung is notorious for taking shots at its competitors. This ad was downright restrained in that regard.

It is worth noting, however, that Apple’s newly released ad “Powerful/Gigantic” had the 8th highest Ace Score of all ads to debut last week. While Apple was able to grab consumers’ attention, it wasn’t able to convey as much information or relevance. Still, this is more about the phone and less about the culture and consumer’s reacted accordingly. It’s the highest scoring ad from Apple in the past year. Here is the Apple ad for reference:

Like the Lakers and Celtics or the Steelers and Cowboys—the advertising world is just better off when these two juggernauts are cranking out great creative. Here’s to our ringside seat in week 17.