Uncovering the Tie Between Emotion and Viral Ads

A key theme seen in many of the most viral online video ads in 2015 was emotion and the push for brands to make that emotional connection with consumers.

In a noticeable shift from humor-focused ads, brands are finding viral success by making a heartfelt emotional connection with viewers. This trend can be seen taking root in many of the 2015 Super Bowl ads, often an indication of broader trends in advertising. As the graphic below depicts, inspirational/emotional messages took a big bite out of humorous ads in 2015 after being virtually non-existent as recently as 2012.

The idea of advertisers aligning themselves with social issues and working to evoke powerful emotions is not groundbreaking. What follows is an exploration of how five online ads made an impact with viewers this year and why they became viral hits. What did these five ads have in common? They appealed to people of all ages, genders and other demographic breaks in spite of the product or subject matter; they delivered messages that consumers overwhelmingly named as the “single best thing about the ad;” they scored extremely high emotional and likeability scores, and changed consumers perceptions.

In March, the Ad Council created content gold with their poignant spot, “Love Has No Labels” which was quick to go viral and drive powerful feelings of admiration. Produced by R/GA, the 3:19 video takes place on Valentine’s Day and depicts a crowd watching various couples, families, and friends emerge from behind an X-ray screen. The crowd is often surprised to see that the dancing skeletons were two women, or two men with a child, or a mixed race couple, or girl with her sister who has Down’s Syndrome, or an older couple. Their surprise quickly turns to raucous cheers. The ad challenges people to admit their biases and embrace the idea of “love is love.”

In Ace Metrix testing, this ad had an overall Ace Score of 670 (7% above the PSA category norm), and was shown to be powered by Attention and Relevance with component scores 10% above the category norm for each. It also scored 50 percent higher than the norm for PSAs on the Emotional Score, which is based on proprietary NLP sentiment analysis of user comments. The Ad Council video demonstrated broad appeal, across gender and age, striking the biggest chord among women 21-35. As one such viewer commented, “I think it is ground breaking, powerful, eye opening, beautiful and breath taking…It should be played EVERYWHERE!” Another viewer, Male 50+, raved, “Loved it! I saw it on the Internet just last night and shared it with my friends.”

Gillette Venus also exceeded category norms and had viral success across gender groups this year with its female empowerment spot “#UseYourAnd”, created by BBDO. In the ad, women are encouraged to shed one-dimensional labels, expanding on the oft-used concept “smart AND pretty.” Women are invited to take a stand, to be all they can be, whether a “beautiful astronaut” or a “soccer-playing ballerina.” They are implored to use their “and” when they are being described, e.g. “polished nails and a polished mind,” “warmth and wisdom,” or “grace and guts.” This ad also drove a high sense of admiration, and users often used words such as “empowering,” “inspiring,” “powerful,” and “uplifting” to describe it.

This socially relevant ad had an overall Ace Score 611, 17% above the Personal Care category norm. It was powered by its ability to change brand perception and break away from past advertising (18% above category norm for communicating Change), but also scored extremely high in Attention and Likeability (16% above category norm for each.) While the ad clearly spoke to women, with top scores among the women 36-49 group, men were also moved by it. One male 36-49 viewer commented: “Fantastic ad; I have a little girl and want her to be all she can be …without people labeling her.” Another male viewer in the same age group said, “This ad was incredible… Use your & to make a stand!!! This is one of those ads I could see being shared multiple times on social media.”

Following the theme of girl power is Mattel’s recent Barbie ad, “Imagine the Possibilities”, also created by BBDO. Often described as empowering and uplifting, the video depicts little girls in everyday grown-up situations, each imagining herself in a high-power career. As the graphic below illustrates, the ad is quite similar in personality to Gillette #UseYourAnd, though powered more strongly by Attention and Likeability. In fact, it garnered some of the highest Component Scores ever seen for Attention (803) and Likeability (804), coming in at 36% and 44% respectively above Toy category norms. Out of thousands of TV and digital ads we measured this year, only two have scored higher for Likeability. 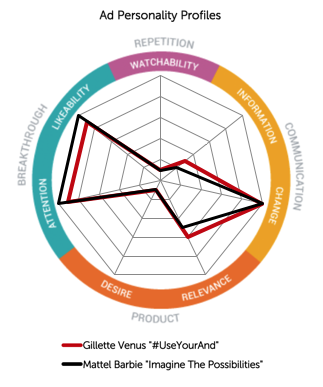 Mattel’s ad resonated the highest among women 36-49, but also exceeded category norms among men of all ages. It clearly drove intense reactions and positive perception change for Mattel, with 33% higher than the Toy category norm for Change “in company direction.” One viewer commented, “As a father with a young daughter, I love the message that this ad sends.”

Lean Cuisine shifted away from the typical “diet” ad worked with 360i to create the viral hit “#Weigh This”. In this ad, several women approach a rather intimidating scale. Instead of being asked to weigh themselves, they are asked to speak about their proudest accomplishments. By shifting the conversation from physical weight to an emotionally empowering tale of achievement and success, these women open up about personal details and changed their interpretations of “weight.”

With an overall Ace Score of 648, this Lean Cuisine online ad was powered by its Relevance component score of 674, 10% above the Packaged Foods norm, indicating that people related to the message. The ad out-performed category norms among all women, as well as men 21-35. Proving the brand reached men and women alike on an emotional level, one male viewer said, “Wow, incredibly powerful!” Another male viewer stated, “This is a very emotional ad – captivating. I hope it’s seen by many.”

Highlighting the potential of technology to empower, Microsoft Office’s “The Collective Project: Robert Downey Jr. Delivers a Real Bionic Arm” is as emotionally driven viral ad that also capitalizes on celebrity fandom. The video tells the story of Iron Man delivering a bionic arm to seven-year-old Alex, who was born with a partially developed right arm. This ad manages to be inspirational and moving, while also injecting humor into the dialogue between Alex and Robert Downey Jr.

One thing that is remarkable about this ad is that it is powered in equal parts by Information, Change, Attention, and Likeability (as shown by the Ad Personality graphic below.) In addition to grabbing attention and being liked, common characteristics of other ads we’ve discussed here, it relayed information people were interested in and changed brand perception.

While there will always be a place for humor and mind blowing visuals in the world of viral video ads, it’s clear that this year, high component Attention, Likeability and Change scores along with a strong message of emotion and empowerment won viewers over.  Brands saw success by not only making strong emotional connections, but by being relevant and likeable.

This Year’s Most Effective Holiday Ads