University Ads in the COVID-19 Era

Higher education is facing a radical transformation in light of the pandemic. Historically, the in-person experience of traditional universities provided an unmatched advantage compared to solely online schools. With in-person now removed from the equation (at least temporarily) in many cases, 22% of college students across all four years are planning not to enroll this fall.

Online, for-profit universities are getting their time to shine as COVID-19 took away a competitive advantage of on-campus institutions and upended the job market. We learned which jobs are essential, which ones can adapt to remote work and which ones we need more of. In light of this change, online universities are targeting ads towards working professionals looking to upskill in a field positively impacted by COVID.

We analyzed breaking ads from online and traditional universities that first aired within the past 180 days through the lens of University Intenders. The segment consists of viewers that reported they were either considering enrollment in a degree, certificate or course at a college (on-campus or online) in the next 18 months or were unsure (but can still be convinced) at the time they watched a given ad.

On average, ads from traditional institutions significantly outscored online schools across almost every component measure — most notably on Change, Likeability and Information. Online universities only kept up with traditional ones in terms of Relevance, but ultimately that was not enough to compete in terms of driving consideration. On average for traditional, on-campus ads, 54% of university intenders reported they were much more or more likely to consider a given school whereas 49% of these viewers said the same thing after watching online university ads. 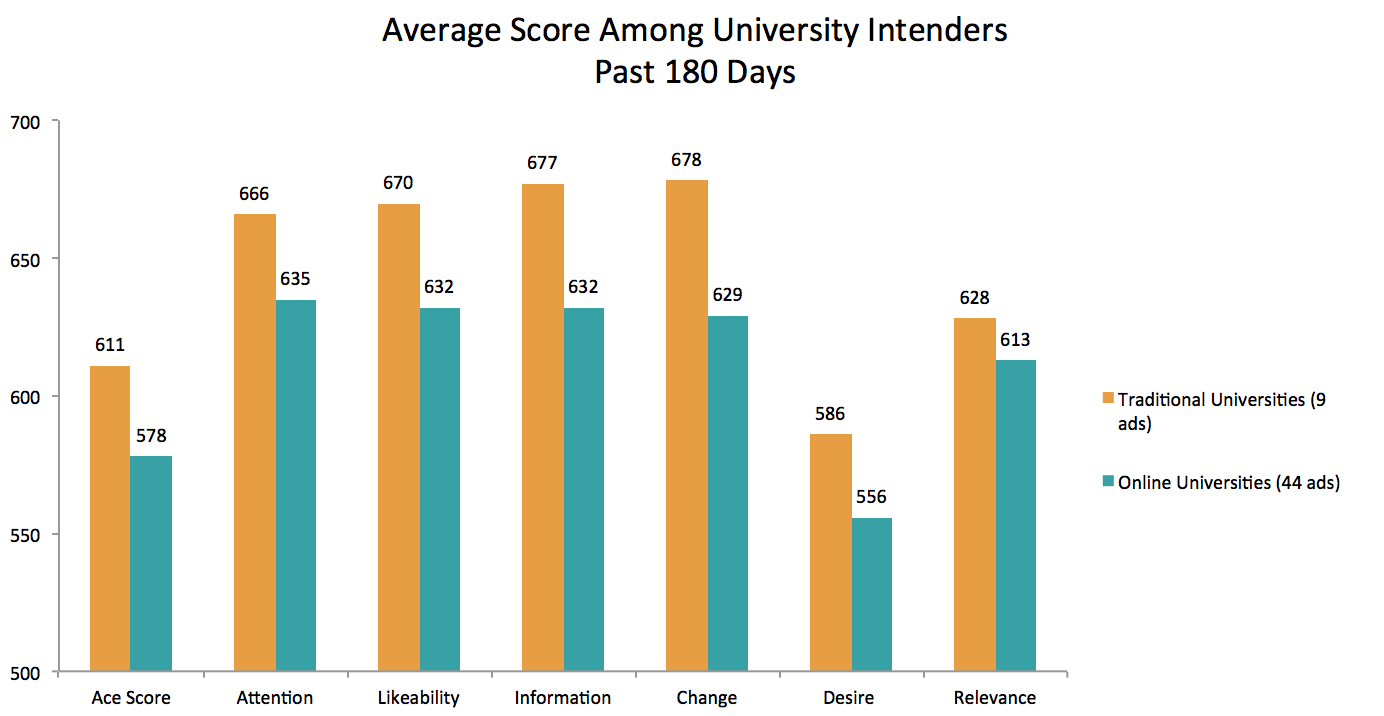 University intenders in both the 16-20 and 21-35 year old age groups resonated much more with the traditional, on-campus college ads. The difference was more drastic among 16-20 year olds, where on average the on-campus ads drove positive consideration among 42% of them vs. only 34% for online university ads.

When excluding university intenders that reported they would “never consider” the respective advertiser, both online and on-campus brands scored similarly on Desire and Relevance. Ads from on-campus institutions still outperformed online ones on every other metric, particularly Information and Change, which drove significantly greater positive consideration among these university intenders (59% on average vs. 54% for online schools).

Tell a Story, But Also Standout

Inspirational storytelling is an innate characteristic that comes with the university category, where a lot of ads focus on finding a sense of purpose through higher education. University intenders regularly find these ads empowering, so much so that 94% of those we analyzed from the last 180 days scored on our Empower metric.

However, this prevalence of empowerment stems from a formulaic approach that viewers have sniffed out. Often among the online, for-profit universities, several viewers for each ad mentioned in their verbatim comments that they perceived higher education advertising as all the same with very few distinguishing brand characteristics:

“It didn’t stand out or grab my attention, as it seemed like any other ad for a university.” Female 21-35

“It doesn’t seem unique with other college ads. It’s the same repetitive message and same cliche video of a professor lecturing.” Male 16-20

“It’s average for a college, very similar to other college ads.” Female 36-49

When it came to recent traditional university ads, most kept calm and carried on despite the pandemic climate. Some even focused on the in-person experience. One such ad was Arizona State University’s “Changing Lives.” It significantly outscored norms across most traditional metrics, save for Likeability which was hampered because some viewers were not interested in the STEM focus.

Despite some scenes not reflecting social distancing and other safety measures, no verbatim comments mentioned the current pandemic climate and its impact on higher education. Instead, viewers focused on the STEM angle and the messaging, which they thought uniquely positioned ASU and set off Authentic emotional signal. Also contributing to that was the inclusivity (e.g., women in STEM) of the ad, as shown in example comments below: 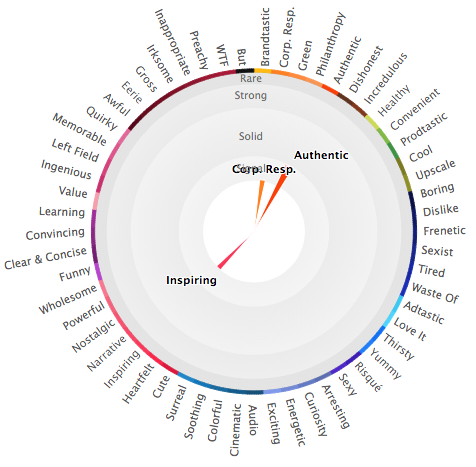 “I really like that the ad was very diverse in the people that it showed and that it mentioned that while it is a tech school, it is also trying to improve things way beyond tech.” Female 21-35

“I thought the message was great, it makes ASU sound like they are doing something different in terms of learning and being innovative.” Female 16-20

“I like the visuals of the technology and the classroom experience. It catches your attention if you really want to learn about technology.” Male 36-49

“This ad was different to other university ads because it did not talk about any statistics or demographics. They focused on their main goal, which I especially enjoyed.” Male 16-20

Just two traditional, on campus ads used the pandemic as an advertising angle. In “Adapt Now,” University of Maryland Global Campus, which already operated as an online extension of the physical university, verbatims mentioned the “Coronavirus” as it offered up a free, one credit course for anyone impacted.

Eastern Michigan University took a different approach in “Safe Stand,” where its president outlined the health and safety measures the school would take in reopening for the fall semester. Despite 41% of university intenders naming the proactive information (Message) the Single Best Thing about the ad, it wasn’t enough to drive Desire or consideration – the former fell short of and the latter on par with university norms. It was the only on-campus university ad that didn’t score on our Inspiring emotional metric. Instead, viewers had mixed reactions to the spot, which set off Solid But signal.

All but a few online university ads avoided making ties to the pandemic. Those that did were not as direct as the two traditional university ads from Eastern Michigan University and the University of Maryland Global Campus. Perhaps more subtly influenced by job market changes brought about by COVID-19, 23% promoted health care programs and 14% were IT programs like cyber security. Other common programs advertised, but to a lesser extent, were teaching/social work and business.

Seventy-five percent of the online university ads scored on our Inspiring emotional metric. However, what separated the most from the least effective was not inspiration alone, but doing so in a manner that came off as Authentic to university intenders. Among the top 20 ads with the highest Ace Score in the category (ranked in order in the heat map below), 14 scored on both Inspiring and Authentic. Moreover, eight of the top ten with the greatest positive consideration registered signal on both.

Just as COVID-19 upended higher education, it could also catalyze change among the industry’s ads. Inspirational storytelling is rife, but when all the players in a game are using the same strategy, it’s hard to win. Brands that stay the empowering course should strive to find an Authentic voice in their ads to resonate better with university intenders, and hopefully stand out.