Forty-five years ago, Coca-Cola’s ad “Hilltop” spoke to a generation with its message of world peace and unity. Millennials didn’t exist yet, but their parents might have thought the ad was “far out.” To this day, the ad remains one of the most popular ever created, evidenced last year by its inclusion in the  final scene of the television series Mad Men. That’s the magnitude of that ad – one of the most iconic commercials ever, within a seminal series about advertising, with the implication that Don Draper himself dreamt up the commercial. Coca-Cola as a brand seems so interwoven with the fabric of America that we often forget it’s still a brand fighting for market share, like any other brand, in an every-changing world.

Coca-Cola recently replaced their seven-year-old “Open Happiness” campaign with “Taste the Feeling.” It’s been widely reported that the brand’s goal is to return to a product-focused message and align itself as one of life’s simple pleasures. Less icon, more of a beloved product. It also appeared the brand is trying to appeal to younger consumers by drawing them in with imagery, music, and situations they could relate to and that would make them feel part of something bigger. A new “anthem” to speak to a new generation with their own ideas about being part of a global community.

So let’s see how the ads are performing against these goals.

As a group, the six new “Taste the Feeling” television ads (all viewable at the bottom of this page) perform best among women 36-49, with an average Ace Score of 624, 12.4% above the soda category norm. In this discussion, we are considering “Millennials” to be those born roughly between 1980 to 2000, meaning the 16-35 age group, which we have broken out into an older and younger segment in the chart below. The ads perform a bit better among the 21-35-year-old group, though are effective with younger male Millennials (16-20) as well. It’s the younger female segment for which the ads, as a whole, are least effective. 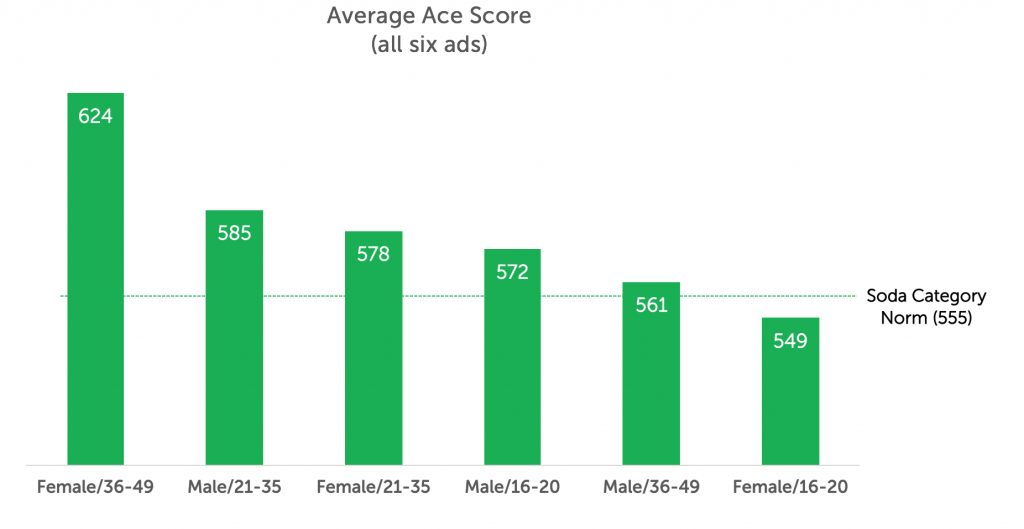 Among people aged 16-35, “Under Pressure” is the most effective of the ads. Set to the song of the same name, it’s a montage showcasing stressful situations teens face everyday. The song is performed by Queen and David Bowie, RIP, the latter of whom passed away a week before the ad aired.

For those between the ages of 16-35, the ad is driven by Desire, followed by Likeability and Attention. Relevance comes through as well, indicating this audience did relate to the message, though it’s not as strong as those other components. One third of this audience described the “Brand” or “Product Itself” as the Single Best Thing about the Ad, with 21 percent saying it was the “Visual Scenes” and 15 percent saying it was the “Message.” 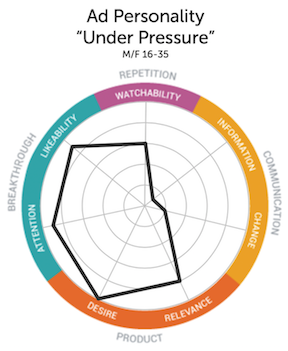 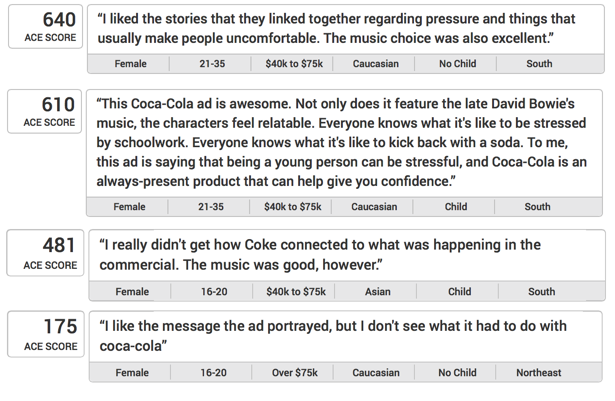 Interestingly, “Brotherly Love”, which was the fourth most effective of the set among the full panel, was the second highest scoring ad among our 16-35-year-old group. Similar in personality to “Under Pressure”, for this age group, the message is highly relatable and likeable. In fact, 31 percent of these consumers called the “Message” the Single Best Thing About the Ad. 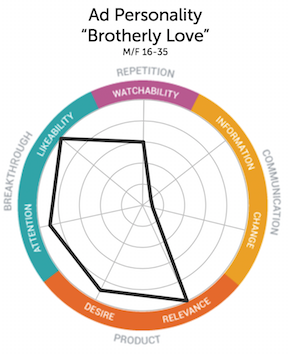 Verbatim responses for this ad also highlight how the message is one viewers relate to, but also show some uncertainty around brand cohesion:

The third most effective ad from this launch – both across the full panel and the 16-35 group — is “Anthem.” Among the 16-35-year-old audience, the ad is also powered by Desire and Likeability, and the “Visual Scenes” are the Single Best Thing about the Ad.

The two least effective among our Millennial group are the two ads that have the most cohesive storylines, “Supermarket” and “Break Up.” Interestingly, while both ad personalities show high levels of Attention, Desire, and Likeability, they fall short on Relevance which was strong in the top performing ads for this group. This brings to the surface the importance of Coca-Cola delivering a message this audience connects with, such as the pressures of being a teenager or sibling relationships.

On a final note, we took a look at a couple of ads from the “Open Happiness” era that were more effective in terms of performance among 16-35-year-olds, “Security Camera” with a 665 Ace Score for this audience, and “#MakeItHappy,” with a 663 Ace Score. 2012’s “Security Camera” won over this group by grabbing attention and being likeable. “#MakeItHappy” was a 2015 Super Bowl ad that clearly delivered on message – 49 percent said it was the Single Best Thing about the Ad. Personality-wise its strikingly similar to “Under Pressure” and “Brotherly Love,” but what’s most eye-catching is this word cloud from the verbatim responses, driving home the impact of the message: 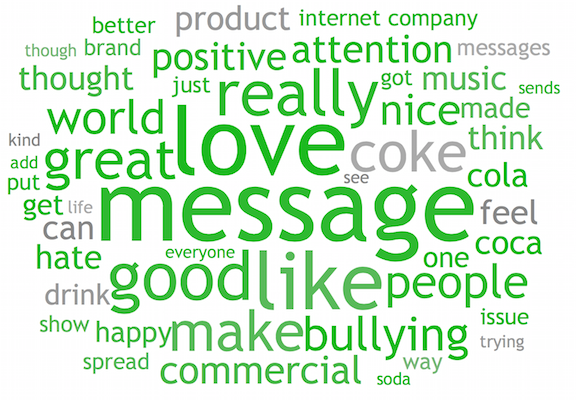 Here are the ads we’ve discussed:

Stay tuned to this blog to see how Coca-Cola’s Super Bowl ad featuring Marvel characters performed, and follow us on Twitter @Ace_Metrix on Super Bowl Sunday for real-time insight into all of the ads.