Yah? Iron Man Suites Up to Help the Collective Project 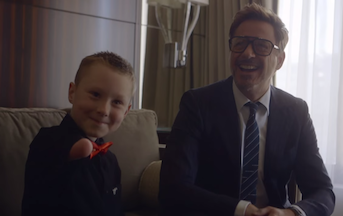 As Robert Downey Jr. prepares for the release of the sequel to his hit franchise, The Avengers, he recently took time out to support an exciting program known as The Collective Project.  Sponsored by Microsoft OneNote, The Collective Project is about “harnessing the power of the many to bring great ideas to life,” highlighting stories of students who are making positive changes to their communities. In this video, Mr. Downey delivers a very special gift to a young fan of superheroes.

Ace Metrix tested this web video with 500 respondents and the reaction was nothing short of amazing, receiving one of the highest Ace Scores of the year (29% higher than the database average).  While the Ace Score is a holistic assessment of creative strength across a host of dimensions, the Ad Personality Profile magnifies which aspects viewers considered to be most impactful (refer to chart below).  “The Collective Project” achieved top decile scores in attention-grabbing ability, likeability, teaching new information, and making viewers think differently about the brand, or in this case, program. 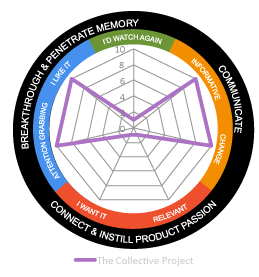 While this video told a highly innovative story, what resonated so strongly with viewers was the intense emotional connection that it established.  In addition to being scored by viewers as one of the most powerful ads of 2015, analysis of qualitative feedback revealed “The Collective Project” to having one of the strongest positive emotional reactions of any advertisement.

Terms of sincere admiration were used to describe how viewers felt about the story, with a few of the many below. 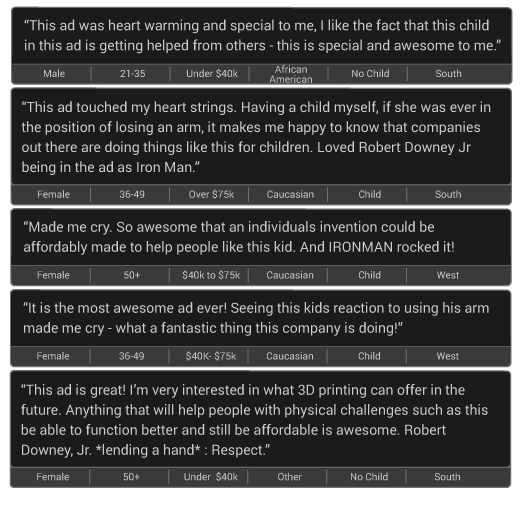 These kinds of intense emotional reactions help to understand how “The Collective Project” became a viral hit.  From a business perspective, Microsoft OneNote sponsored this video, but did not have a heavy hand in branding it with audible and visual mentions, which ultimately resulted in few viewers recognizing the brand.  This tactic was likely intentional, allowing The Collective Project to be the star of the show, with 27% of respondents able to identify the program.

To learn more about The Collective Program, visit their site.

Can a Tiger Change His Stripes? Iconic Nike Ad Revisits Tiger Woods from 1999