Can a Tiger Change His Stripes? Iconic Nike Ad Revisits Tiger Woods from 1999

Ninety-seven of the world’s best golfers will tee it up for the 82nd playing of The Masters at Augusta National starting today. As always, golf fans will be following Tiger Woods closely. The four-time Masters champ hasn’t won a green jacket since 2005, with his last win at a major coming at the US Open in 2008. In the spirit of this week’s Masters tournament, we’re dedicating Throwback Thursday to an iconic Tiger Woods ad from 1999.

“Juggling Golf Ball” features Tiger Woods performing tricks with a golf ball that few people not named Tiger Woods could perform. The ad has no voiceover and doesn’t feature a single product. The only visible branding are the Nike Golf logo and “Tiger Woods,” which appear briefly on the end card.

Celebrity endorsements can be a hit-or-miss proposition. Tiger’s reputation took a dive due to well-publicized personal issues in 2009, and many of his endorsement deals dried up. Results from this week’s survey show that Tiger’s reputation may be on the mend, but many respondents still have negative opinions about the world’s former number-one ranked player.

The ad achieved an Ace Score of 459, which is 9% below the one-year Men’s Apparel norm of 506. Information, Desire and Relevance all gapped well below norm, while Attention and Likeability were both near or above norm. Under the lens of the Ad Personality profile, we see that “Juggling Golf Ball” had top-decile relative scores in Breakthrough and Watchability. 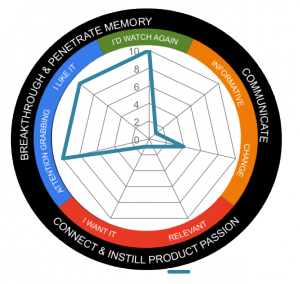 The word cloud from 284 open-ended verbatims shows that Tiger was highly recognizable in this spot but he generally didn’t inspire high scores. In fact, 20% of respondents used the word “Tiger”, with an average score of 421, while 17% used the word “Woods”, with an average score of 389. These scores are actually slightly higher among females: 423 and 413 for “Tiger” and “Woods”, respectively, vs. 417 and 319 among males. The word cloud also reveals how the ad achieved its Breakthrough persona, with “cool,” “awesome” and “entertaining” all prominently mentioned. 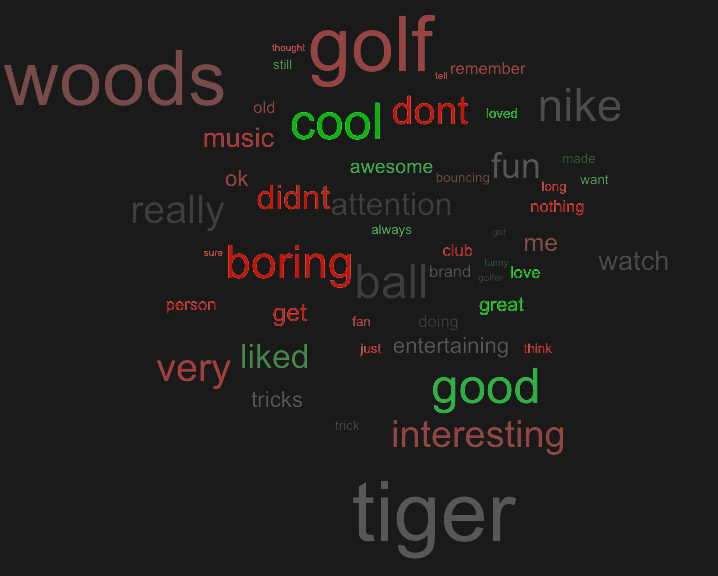 The mixed results of a vintage Tiger Woods ad tested on the eve of this year’s Masters suggest that Tiger is still a few shots back when it comes to fully repairing his celebrity appeal. That said, even if he’s a 20-to-1 long shot to win his elusive fifth green jacket this weekend, we think it’s safe to assume that Tiger’s reputation has improved over the past few years. Nike certainly hopes so. A new ad appeared online earlier this week, featuring a young Rory McIlroy and his idol, Tiger Woods, just in time for the weekend drama at Augusta.

Jeep Double Parks in This Week’s Ad of the Week

Yah? Iron Man Suites Up to Help the Collective Project