And the Ad Emmy Goes to…

The Creative Arts Emmy Awards will take place on August 16, 2014 – a week prior to the Primetime Emmy Awards. We’re a bit curious if just one Emmy will be awarded since it’s not clear from the Television Academy’s site, but we’re thrilled nonetheless to see this thin but thoughtful list of nominees.

“An honor just to be nominated” takes on a whole new meaning when only five ads were selected from, according to our numbers, around 6,000 ads; all the more reason for Anomaly and Budweiser to celebrate their double nominations.

Here’s how the American television viewing audience responded to the nominees.

Featuring a compelling voice-over from actor Bradley Cooper and a wide array of people doing traditional and not-so traditional activities, America found the ad quite relevant awarding the ad a Relevance score of 579, 14% above norm. The ad scored just 10 points above norm overall (Ace Score 519), but a look into the demographics reveals a skew younger. Although the ad performed best with Men 21-35 (Ace Score 600) it also found a strong audience among men and women 16–20 (570, 588 respectively).  While some found it long (90 seconds is a lot to ask from this crowd), many commented on the well-crafted, inspirational message, and the unobtrusive brand promotion. Here’s just a few comments from the top demo: 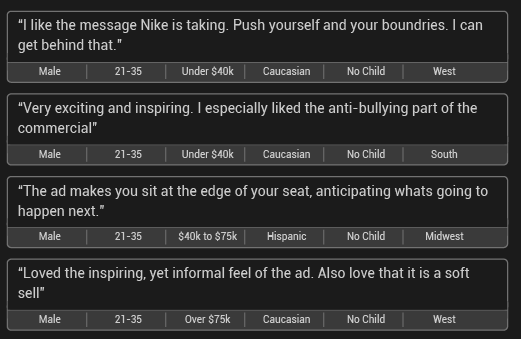 As Apple fights to keep its cool factor, this ad certainly stirred a lot of holiday conversations in the media and at homes across the country. The ad’s high Relevance score (672) underscores how undeniably relatable the ad is. A more mature, female audience found the ad especially touching, scoring the ad between 12-15% higher than the ad’s overall Ace Score. With an Emotional Sentiment score 33% higher than the Mobile Devices category norm, consumers used words like “family” (15%), “touching” (7%), and “heartwarming” (4%) to describe their thoughts and feelings toward the ad’s message – emphasized by the high use of very (17%). Here’s what just a few of the 360 verbatims that consumers chose to leave for this ad. 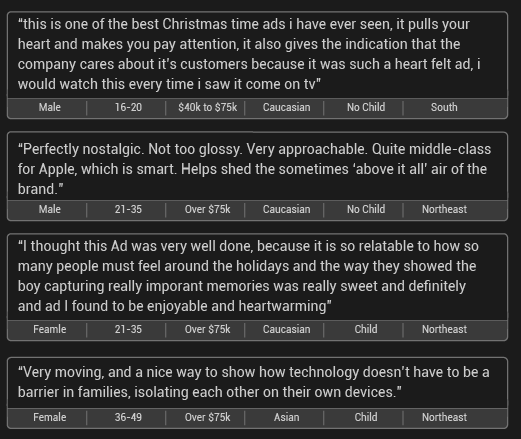 GE, “Create Your Own World”

“Create Your Own World” first debuted during the Sochi Olympics where it captured an Ace Score of 614, 4.3% above the General Business norm. Attention and Likeability are strong drivers of the score for this ad. The young girl and extraordinary visuals keep the audience engaged while delivering a message about GE that many saw as different – and which is apparent in the Change score of 682, 7.2% above norm. Of the 354 respondents compelled to leave a verbatim comment, 8% used the word “interesting” to describe it, 3% “creative” and 3% “innovative”. This was a good brand piece for GE with 75% of the total respondents attributing the ad to GE and many noting the positive “girl-power” message (no pun intended). 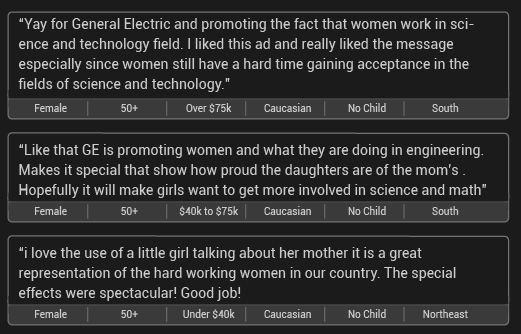 It speaks volumes about Budweiser’s and Anomaly’s creative ability to be nominated for both its 2014 Super Bowl spots. “Hero’s Welcome” features U.S. serviceman, Lt. Chuck Nadd, receiving a surprise welcome from his entire town plus, of course, the entire Budweiser crew. Lt. Nadd’s overwhelming emotion was shared by American consumers who awarded the ad an Emotional Sentiment score of 75, 50% above the Beer category norm. While non-beer drinkers usually score beer ads lower, this ad crossed the divide. The ad received a total Ace Score of 675 and an Ace Score from non-drinkers of 593.

According to AdWeek’s list of The 10 Most Viral Ads of 2014 (so far), Budweiser’s “Puppy Love” is sitting nicely at #3 with close to 2 million shares and over 51 million YouTube views. With a total Ace Score of 681, the ad’s Ace Metrix analytics tell a similar, high-numbers story. While every age and gender demographic awarded the ad a score well-above 600, women were especially fond of the adorable, little fur balls, awarding the ad a score of 712, 11% higher than the score men gave the ad. Similarly, the 361 optional verbatims consumers left for the ad create an awwww-some Emotional Sentiment score of 83, which is 62% higher than the score for the average beer ad.

All five are great pieces and we look forward to seeing who takes home the trophy on August 16th.