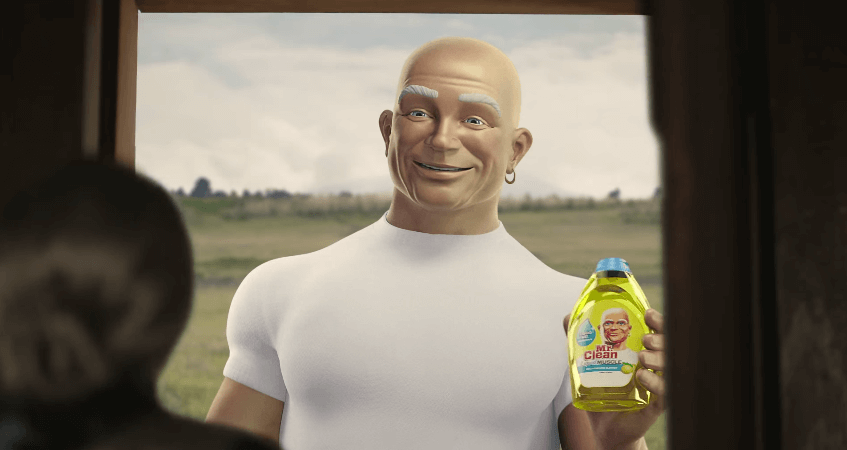 Folks around the office were debating which ads and brands drew the strongest Emotional Sentiment index (ESI) – a score we developed to capture the emotional engagement consumers have toward ads. The index is based on text analytics applied to the hundreds of verbatims that consumers choose to leave for an ad. An ad’s objective may be to surprise or shock, gross out (think Terminex) or, the more obvious tug at the heartstrings. Each approach will register somewhere along the 1–100 index, ranging from negative to neutral to positive.

Here we take a look at the ads and brands that have generated the strongest ESI so far this year. 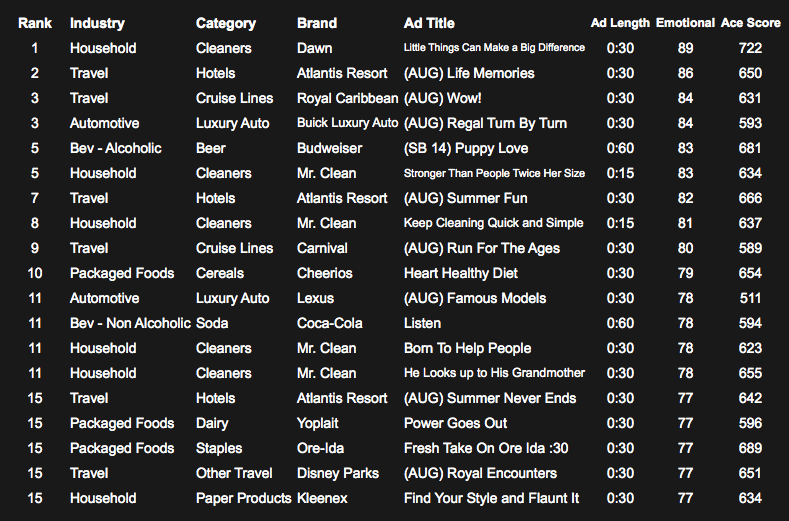 As we look at more than 4,000 ads scored so far this year, across 95 categories, we might have expected to see our friend Dawn leading the list. Dawn’s “Save the Wildlife” campaign continues to draw top Ace Scores and high Emotional Sentiment scores with each iteration. The latest did a nice job of integrating the old oil-rubbed ducklings into a modern creative feel and subsequently won the Ad of the Week a few months back. Beyond the philanthropic soap brand are a variety of hotels and cruise lines, which tend to generate lots of enthusiastic responses – who doesn’t love a vacation? And the Luxury Auto brands Buick and Lexus both make the list with some elegant spots. But we were pretty surprised to see a certain muscle man appear multiple times along the top 15 ads.

In fact, Mr. Clean consistently posts ESI numbers in the high 70s and 80s, earning an average ESI of 76. So while Dawn maintains the crown for the top scoring emotional ad of all time, followed by itself as runner up, the brand also publishes a series of more traditional soap ads that don’t draw the same kind of affection. Mr. Clean, however, generates the highest average Emotional Sentiment score for any brand this year. So, what about Mr. Clean ads drives this consistent emotional engagement?

First, Mr. Clean is a character that easily lends itself to the attributes of the product. Consumers don’t have to make a big mental leap from a strong, shiny-headed man in pure white to strong cleaning agents. There is no confusion about what this character is doing in the ad – a sentiment that can appear with other, less effective brand characters. (Call us up for the inside scoop on those!)

Second, Mr. Clean has staying power and nostalgia on its side. Consumers remember this character from their own childhood (viewing and cleaning) experiences. Mr. Clean has done a great job more recently by reinventing this longstanding brand character. Leveraging the nostalgia of a trusted figure, recent ads have featured a baby Mr. Clean and Momma Clean, providing an even more relatable family feel.

And finally, each ad effectively delivers a balance of entertainment, information and relevance. 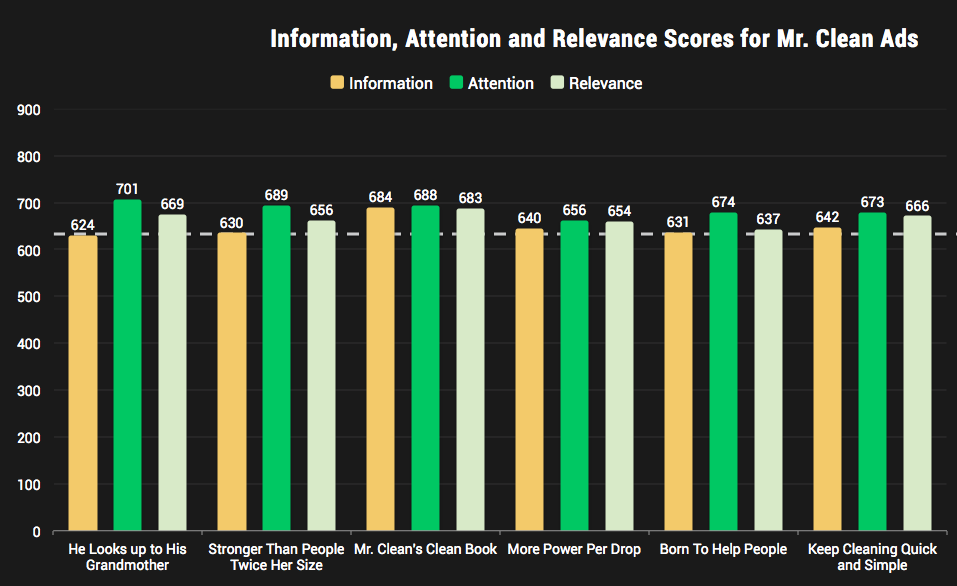 Interested in what other brand characters evoke strong emotion – but didn’t quite make the list? We have the Emotional Sentiment rankings for every ad aired this year.