Each month the thinkwithGoogle site posts their YouTube Ads Leaderboard, which showcases the most creative ads that people choose to watch each month. For the past year or so, we’ve taken a look at those lists to provide some insights as to how the ads perform against a representative general population audience. By definition the ads posted to these lists include paid views, organic views and audience retention (how much of a video people watched). Increasingly, the content is disproportionately short film items versus the branded ad content it used to be. Regardless, here’s a look at some of the most viewed video ads for July and how said ads would perform with a more diverse audience.

Ace Metrix scores are based on how everyone would respond to the ad, providing actionable data to marketers contemplating placing their online ads more broadly, digitally or in front of a television audience. To be both among the top viewed ads online and achieve a top quintile Ace Score or high Emotional Sentiment index is the remarkable confluence of great viral appeal and broad demographic appeal.  Here are three of the most popular YouTube ads for July.

A tribute to Derek Jeter, this ad crosses the demographic divides, bridging gaps not only between the ages and sexes, but also between baseball fans. The ad excelled on each component relative to the Apparel & Footwear 90-day category norm with particularly strong Likeability and Attention scores as well as a Relevance score 18% above norm.

Of the 385 optional verbatim comments left for this ad, 14% used the word “respect” and 53% identified the brand as Jordan or Nike. 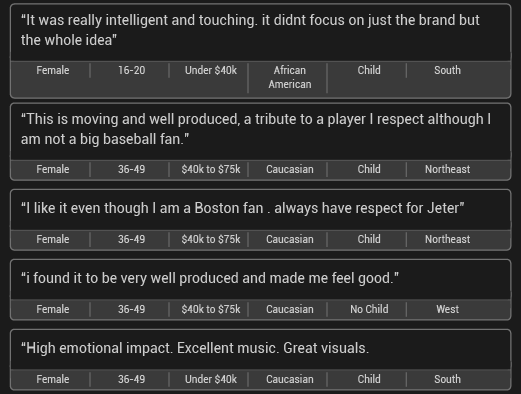 A mark of great creative, the ad delivered a simple message, artfully and eloquently without isolating or polarizing. Even those who claimed not to be fans of the sport, the brand or Jeter himself, remarked at how well crafted the ad was.

Samsung knows how to “wow” a crowd with features galore. Combine a cool technology with a cute baby, and that’s the formula for this viral Samsung ad. In 60 seconds, the ad was able to carefully balance product information and entertainment in order to succeed across all six components of Persuasion. The ad especially scored well on the component of Desire, 22% above the 90-day category norm.

It’s obvious from the consumer word cloud that people went gaga over the baby and the tablet’s tech. Twelve percent of consumers mentioned how “cute” the little guy was while 8% mentioned the “tablet.” 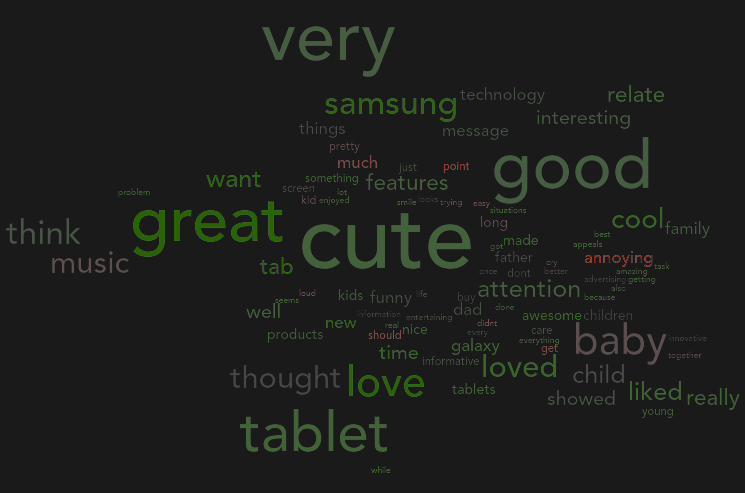 Of course, for consumers not yet in their baby-rearing years, the ad was a little more difficult to relate to. For older consumers, however, the ad was completely relevant and respondents could truly appreciate the dual-functionality of the Galaxy Tab S.

Burger King’s move to create this viral video was a bold one, but it’s paid off. In an interview with USA Today before the popular video debuted, Fernando Machado, SVP of Global Brand Management at Burger King, said the ad was created to represent Burger King’s values as a company as well as to connect more with the millennial generation. According to our data, Burger King was successful in its intentions. “Proud Whopper” scored above 700 with younger millennials, ages 16-20. Additionally, the ad had a high Change score—16% above the 90-day QSR norm—indicating that the ad made consumers feel that Burger King is moving in a new direction.

While the famous BK Whopper is a QSR-standby, it wasn’t the product this time that got consumers’ attention; it was the ad’s message. Nearly 50% of the survey’s respondents selected “the message” when asked what was the best thing about this ad.

Burger King’s move to vocally support gay rights is in line with its updated motto, “Be Your Way.” Of course, if you read the ad’s YouTube comments, you only see the polar end of the spectrum. With the ad’s Ace Score coming in just slightly above the current QSR 90-day norm, we get a more accurate view of how Americans, and the general population, really feel about this ad as well as the hotly-debated issue.

Guinness has become a powerful emotive advertiser in recent years. Its emotional ad “Friendship,” which depicted a group of friends playing wheelchair basketball while only one man needed the chair to play (4,639,426 views), actually won Ad of the Quarter in 2013. “Empty Chair” concludes a similar surprise ending and achieves a stellar Attention score to prove its success. A 0:60 version of the ad scored even higher with a quicker reveal but just as impactful message, according to the nearly identical Likeability and Attention scores.

The ad’s word cloud with the word “very” highlighted adequately shows what made this ad go viral. Many consumers felt the ad was sincere in its intention to celebrate our American heroes. 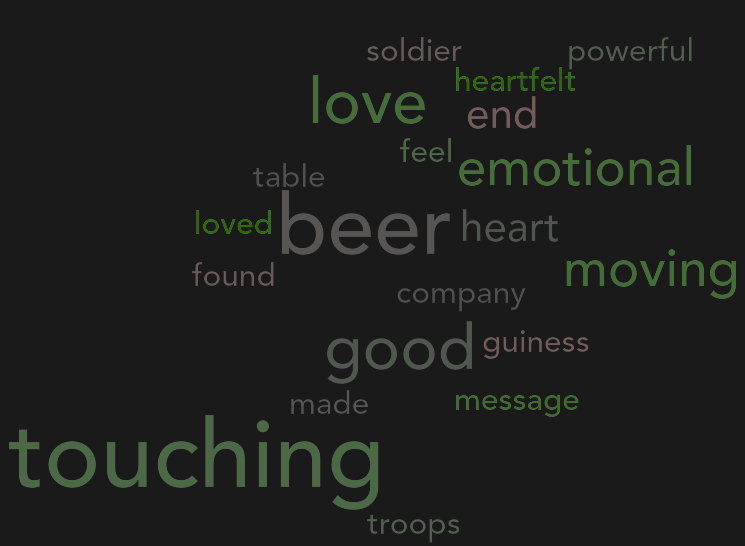 Much like Budweiser’s moving spots, this Guinness ad crosses the beer-divide. While beer drinkers awarded the ad high scores in the 600s and low 700s, non-beer drinkers still awarded the ad a score 3% above the 90-day Beer category norm. Cheers, Guinness.

It’s probably safe to say that a lot of Old Spice ads lately are, well, weird. And this doozy of a spot is no different. Despite personal preferences of the general population, there is still a reason Old Spice ads, like this one, go viral—they work. Men ages 16-20 and 21-35 scored this ad the highest, 25% and 9% above the 90-day Deodorant norm, respectfully. Interestingly, the female skew is reversed, with older women scoring the ad 28% higher than younger women.

Combining the optional responses from men into a word cloud gives us a very clear idea of why men loved this commercial so much. Twenty-five percent of men said the ad was “funny.” 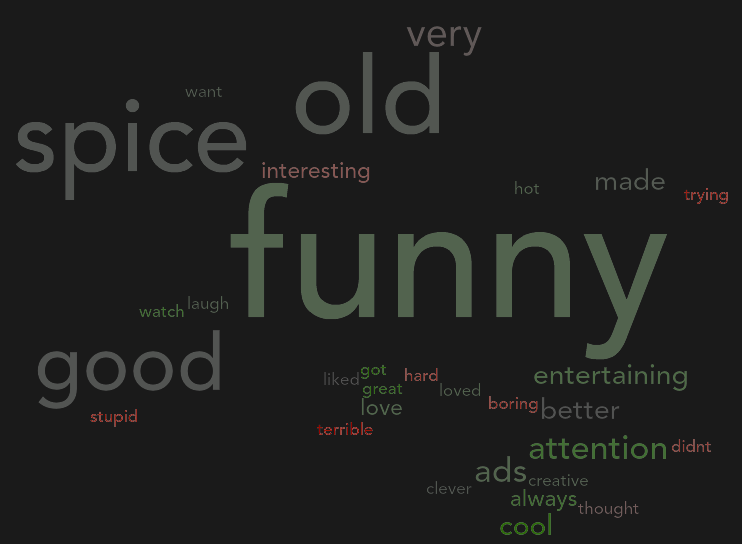 According to the question “What is the single best thing about this ad?” the element that really set folks off was the human-like robot. Twenty-two percent of respondents said that the characters were the best part of the ad.

Lexus’ mesmerizing spot is 0:60 of beautiful, creative advertising. What the ad lacks in Information, Change and Relevance it partially makes up for with its attention-getting antics. While the ad scored below norm against an augmented sample of the general population, it did well with consumers who are looking to purchase a new vehicle in the next six months. Those consumers awarded the ad an Ace Score of 630, 8% above the Luxury Automotive 90-day norm. Additionally, consumers who are current Lexus owners rated the ad especially high (749), 28% above norm. 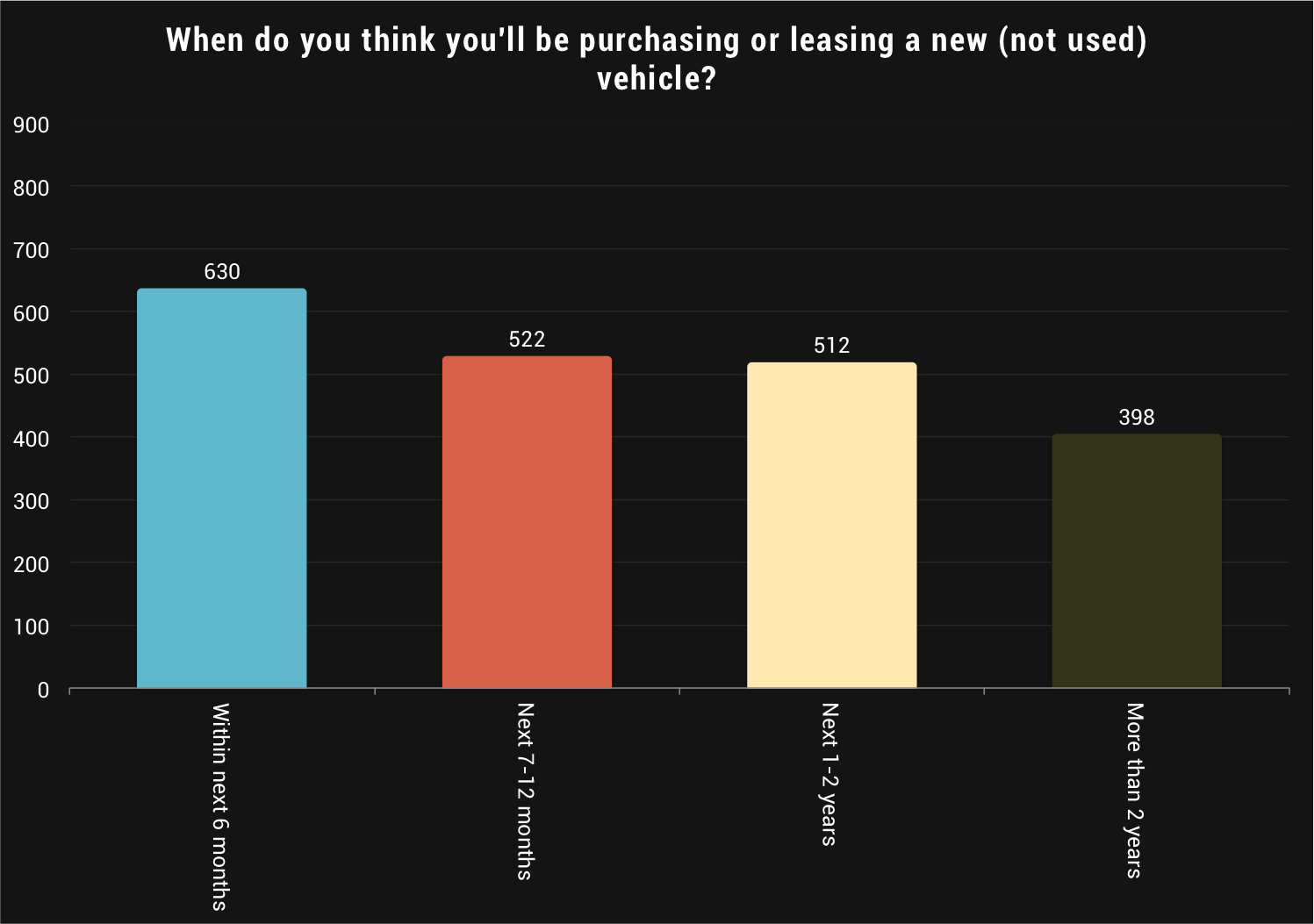 Combining this demographic data with the ad’s word cloud, with a focus on the word “very” (which 13% of consumers used), we can see what made this ad go viral. Basically, the ad is just super cool, with 31% of respondents who used the word “very” also using the word “cool.” 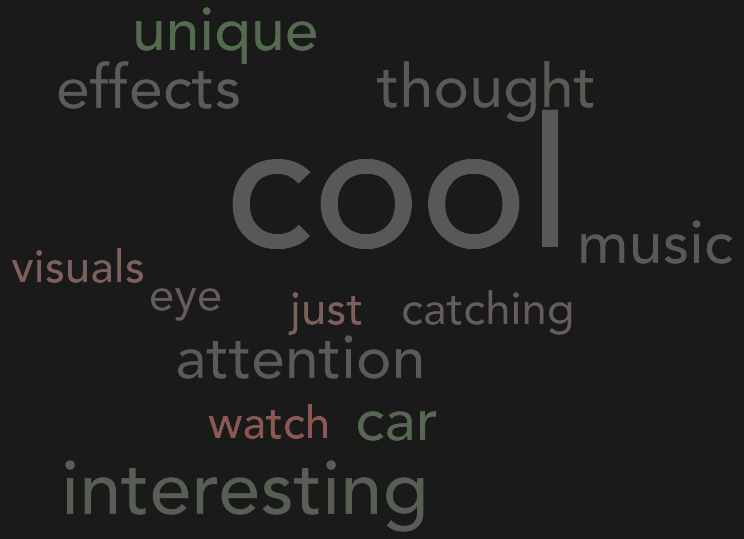 For regular beer drinks, Heineken’s hilarious take on the drinking-alcohol-in-commercials industry practice was a funny, refreshing take on using a celebrity in an ad. Beer drinkers awarded the ad Ace Score 21-33% above the 90-day Beer category norm. Meanwhile, in non-beer-drinking fashion, consumers who aren’t as big of fans of the drink gave the ad a below norm score.

Luckily for Heineken, a majority of consumers drink beer as well as 67% of this survey’s respondents, which is on par with the national average. This clever spot elicited 25% of consumers to use the word “funny” to describe the ad, while another 10% also called out “Neil Patrick Harris” by name. 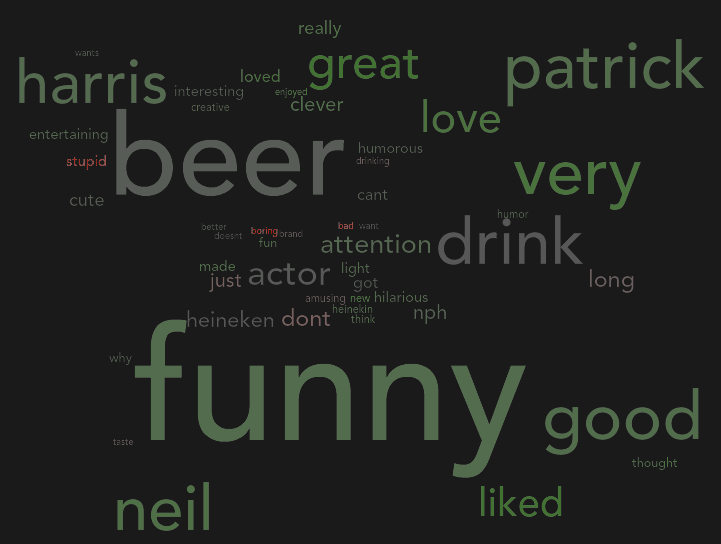 A combination of a well-loved actor and a relatable quip made this ad such a viral success.