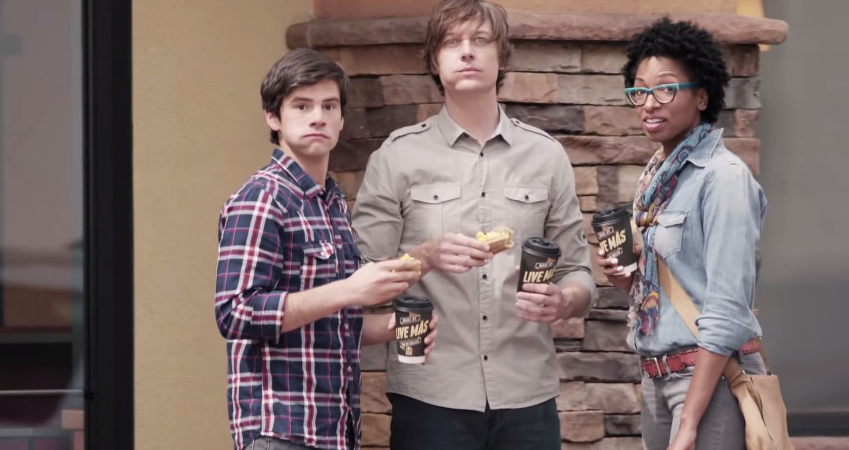 While Baskin-Robbins takes many top spots on the overall QSR list for this year, we wanted to get a taste for what kind of QSR ads Millennials prefer when compared to older demographics. To see which ads Gen Y scored higher, we simply calculated the percent difference between the Ace Scores for 16-35-year-olds and 36-49-year-olds. Perhaps not surprisingly, some pretty interesting ads popped to the top.

As we’ve discovered across various categories, and even throughout our database, today’s younger generation can be much more accepting of unpredictable and “quirky” humor than older age groups. This atypical humor can lead to higher Attention scores, and it also leads us to our first ad, which may be a little more than just quirky…

As a reminder, these ads are not necessarily “creatively effective”—they are simply more effective for Millennials than they are for 36-49-year-olds.

Pete and TJ, the famous Sonic duo, are notorious for their silly antics. This ad perhaps goes above-and-beyond, mentioning the words “new” and “burgers” a multitude of times in just 15 seconds.

As we can see from the age graph, below, it was really the 16-20-year-olds that carried this ad to the number one place, awarding the ad an Ace Score of 590. Overall, Millennials scored this ad 15.4% higher than what 36-49-year-olds gave the ad. 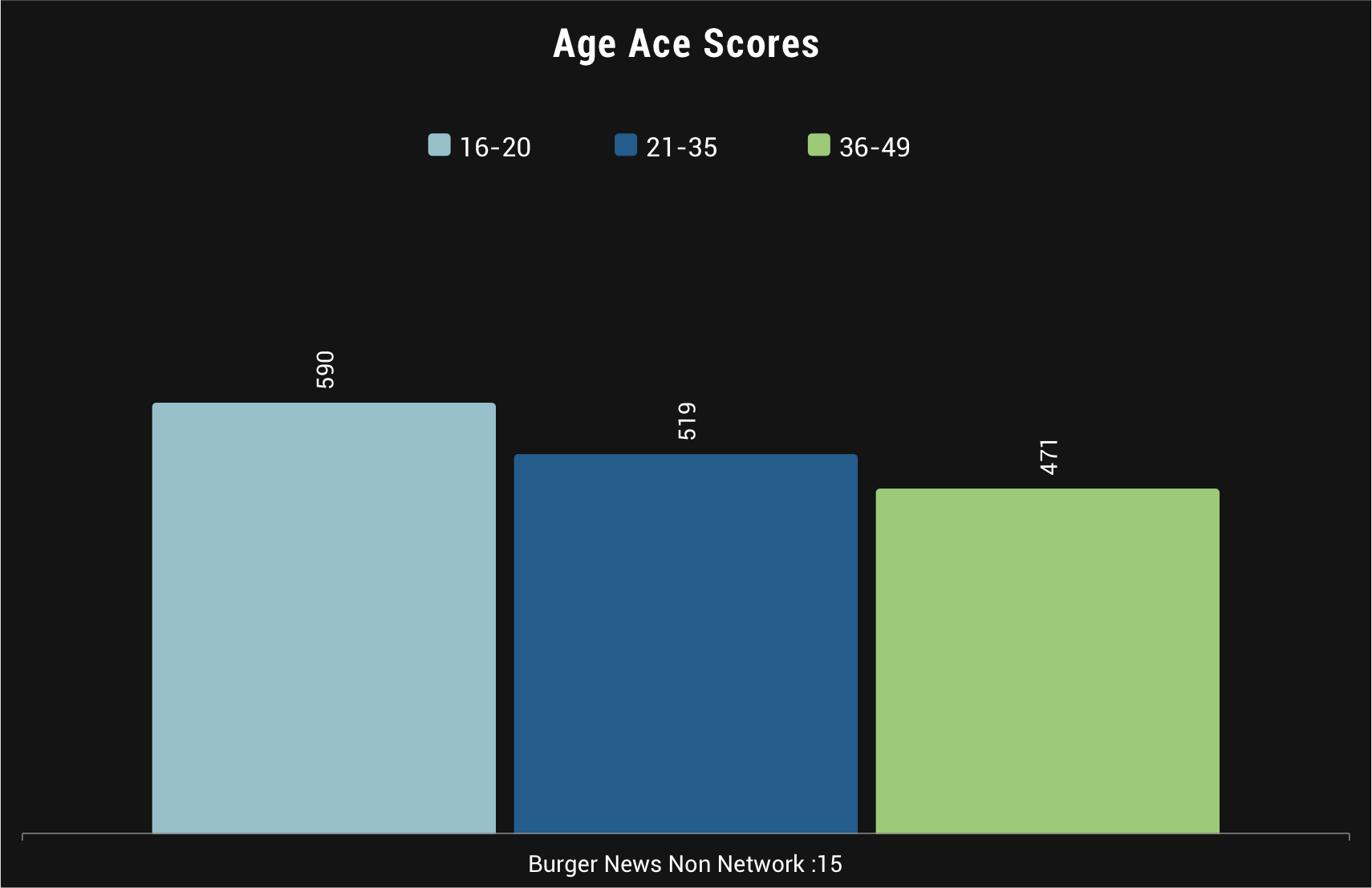 As predicted, the atypical humor in the ad led to an Attention score of 698, which is 6% higher than the QSR 90-day norm. Additionally, the ad’s Desire score from Millennials achieved a score of 644, also well above norm.

Taco Bell has been aggressively targeting the younger generation this past year, launching its new breakfast meals and partnering with Doritos while heavily leveraging digital, TV and social media advertising. “A Spicy Twinge” performed well with Millennials, earning an Ace Score of 610, which 10.7% higher than what 36-49-year-olds awarded the ad.

The ad scores particularly high in terms of Change with Gen Y, 9% above the 90-day Change norm. This tells us that 16-35-year-olds feel Taco Bell is moving in a new direction, likely exactly what Taco Bell was trying to accomplish from this new spot—Taco Bell offers something for everyone, no matter your flavor palette.

The word cloud, below, solely featuring 16-36-year-olds’ responses, reveals what made this ad resonate so much. While 15% of them simply mentioned “Taco Bell,” 9% said they “love” Taco Bell or simply just tacos. 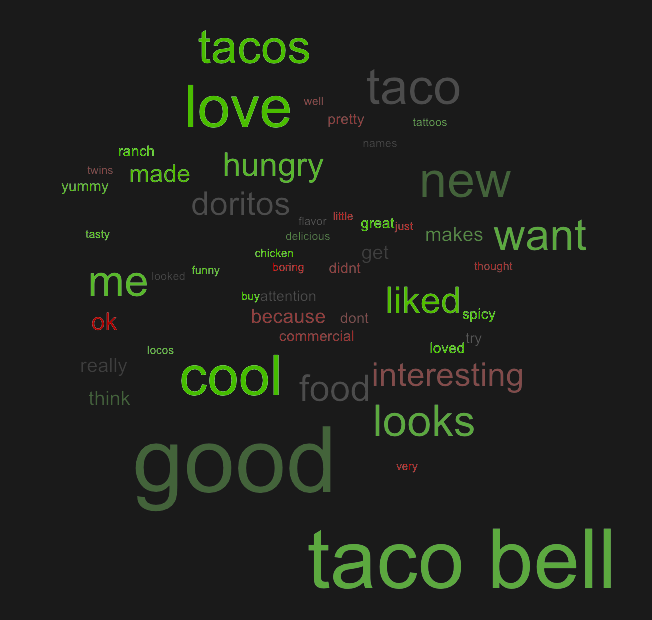 While this ad didn’t have any quirky sort of humor in it, many Millennials still found the ad interesting and more relatable than the older generation. While several Millennial respondents commented on the tattoo scene, finding it cool and funny—a defining example of living life to the fullest—many 36-49-year-olds couldn’t relate to the concept.

Taco Bell easily swooped up two spots on the top five list. “Gateway Breakfast” not only scored 10.1% higher with 16-35-year-olds, it also has the highest overall Ace Score of each of these ads, coming in with a score of 636.

While the ad’s featured waffle taco certainly found its fans, it was the ad’s characters that won the hearts of more consumers. Twenty-seven percent of consumers found the characters to be the best part of the ad. 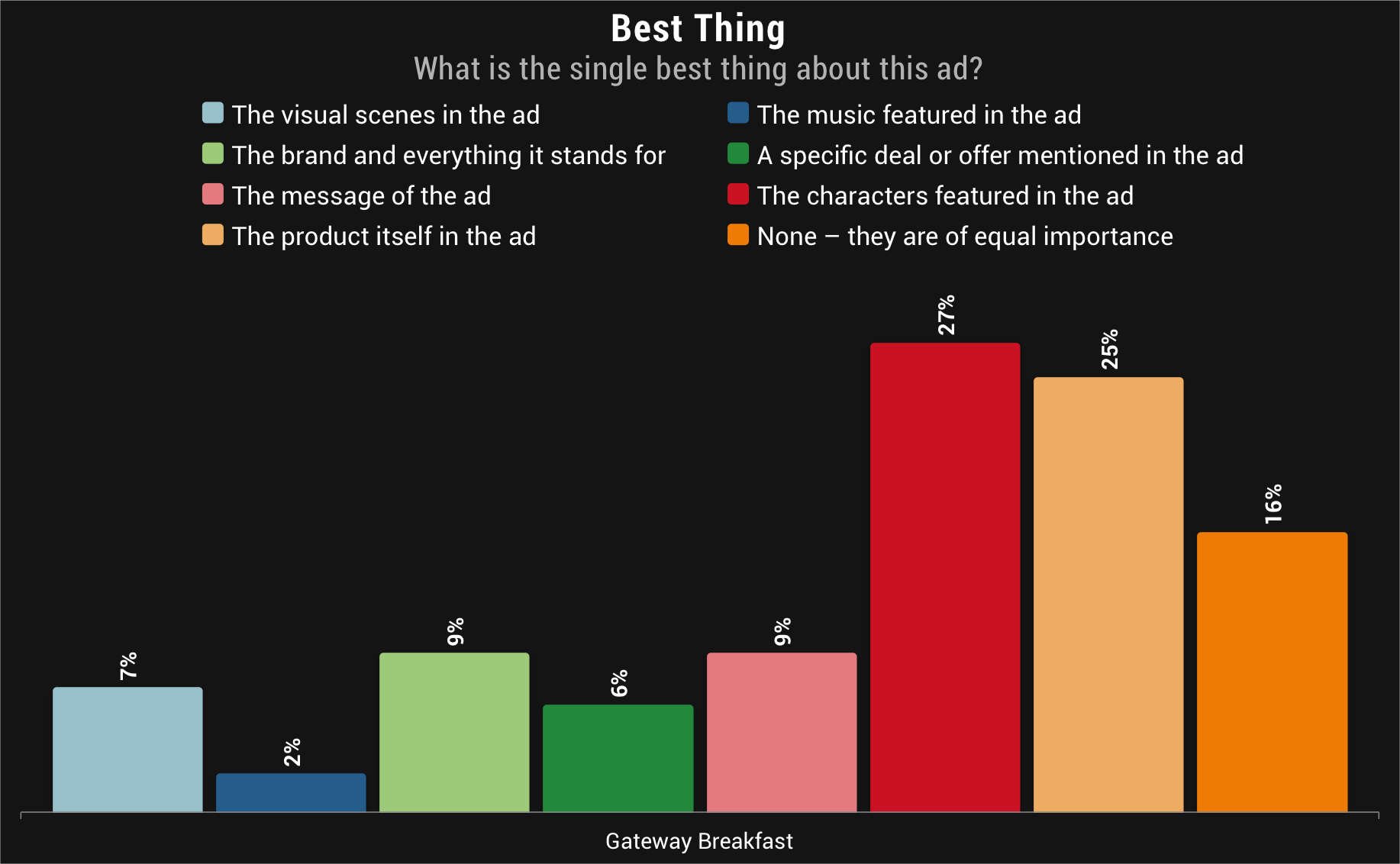 (“Best Thing” data is across all age groups.)

Since Taco Bell launched its new breakfast menu, other regular breakfast competitors, like McDonalds and Dunkin’ Donuts, have been upping their game as well. Dunkin’ Donuts has even run an ad recently for its own breakfast burrito; however, the ad still did not reach the level of “Gateway Breakfast.”

This consumer likely sums up the success of “Gateway Breakfast” best, “First things first the taco bell waffle taco looks so good I can’t wait to try one. Secondly those old men talking smack about the waffle and then yelling at the kid to not grow a pony tail cuz they think the taco is a corrupting, hippie thing just cracked me up. Its genius because it makes you want the taco but it also makes it fun.”

This is the ad that will really be a head scratcher for many non-Millennials (and likely some Millennials as well). “Columbus’ Vision” hasn’t aired since earlier this summer, but when it did, it was on Adult Swim programming. (Perfect, right?) This is one of those ads that did not score well on anyone’s account, but still, 16-35-year-olds rated this ad 9.8% higher than what 36-49-year-olds awarded it.

The ad’s humor and storyline drew much higher Attention scores from consumers ages 16-35 than those 36-49—16% higher.

While Millennials rated this ad higher, the real high scorers of this ad are consumers who have dined at Subway in the last week. These consumers awarded the ad an Ace Score of 595, which is above the current 90-day QSR norm. While current brand users are expected to give high scores, this one is particularly fascinating. 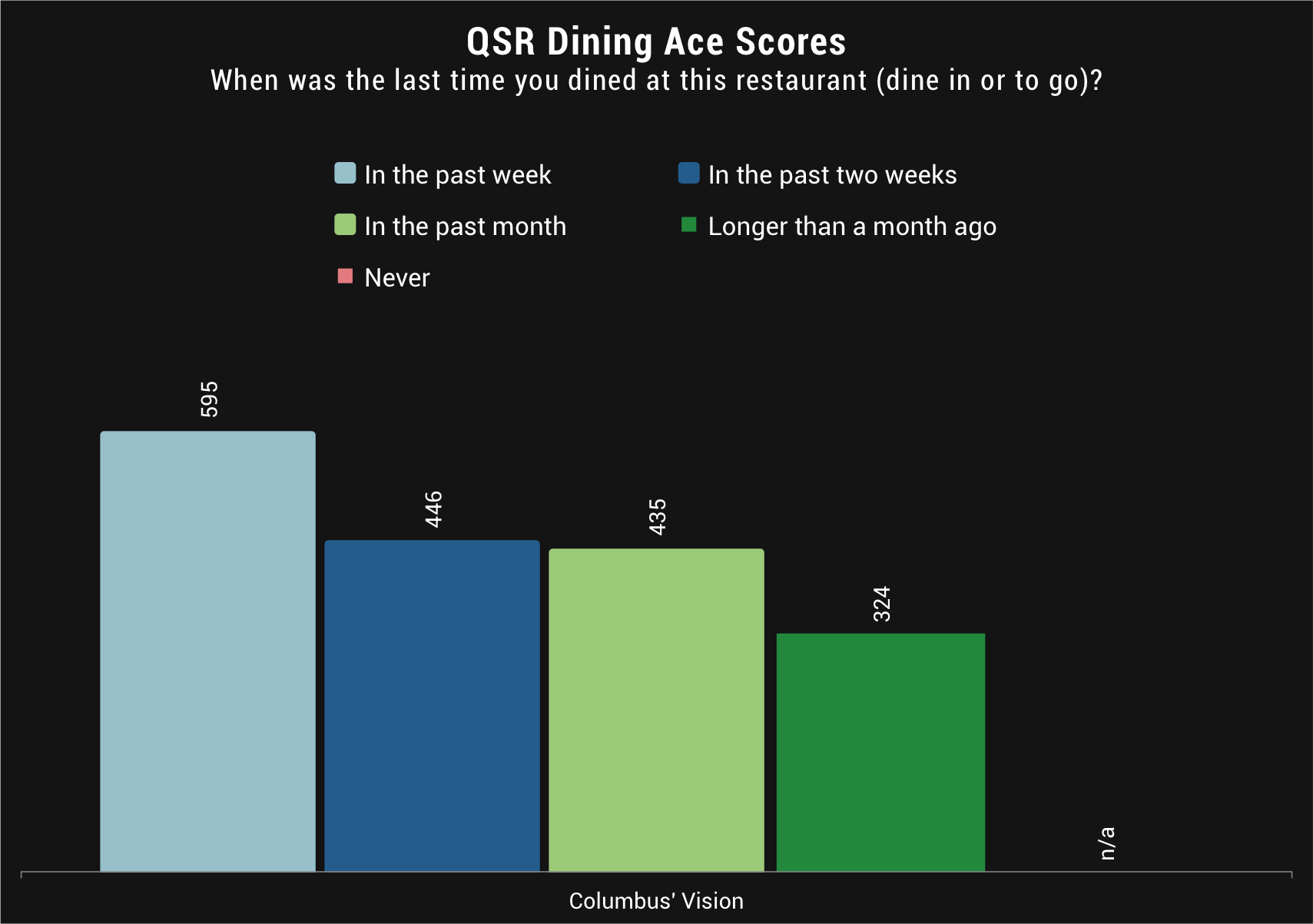 Debuting this ad right around the time of the 2014 Super Bowl, McDonald’s lip sync ad is able to make Millennials chuckle while showcasing the brand’s relationship with the NFL. “Passion” scored 9.4% higher with 16-35-year-olds than with 36-49-year-olds.

The word cloud reveals exactly what aspects of the ad resonated with consumers. Six percent more 16-35-year-olds than 36-49-year-olds remarked that they found the ad “funny.” Additionally, 5% of younger consumers went so far to call the ad “hilarious,” while only two older respondents mentioned it at all. 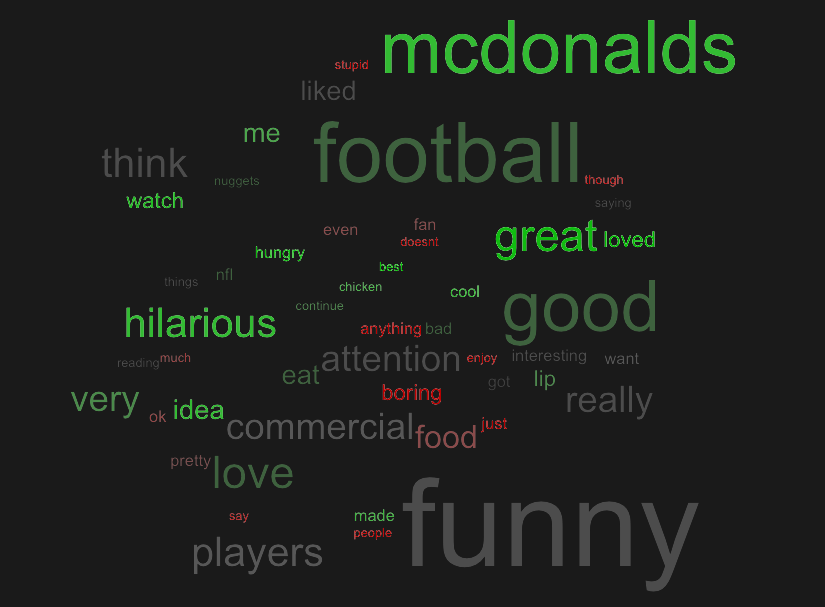 Much like Subway’s ad, “Passion” scored best with McDonald’s current customers, who awarded the ad a score of 641, 13% higher than the 90-day Burger norm. 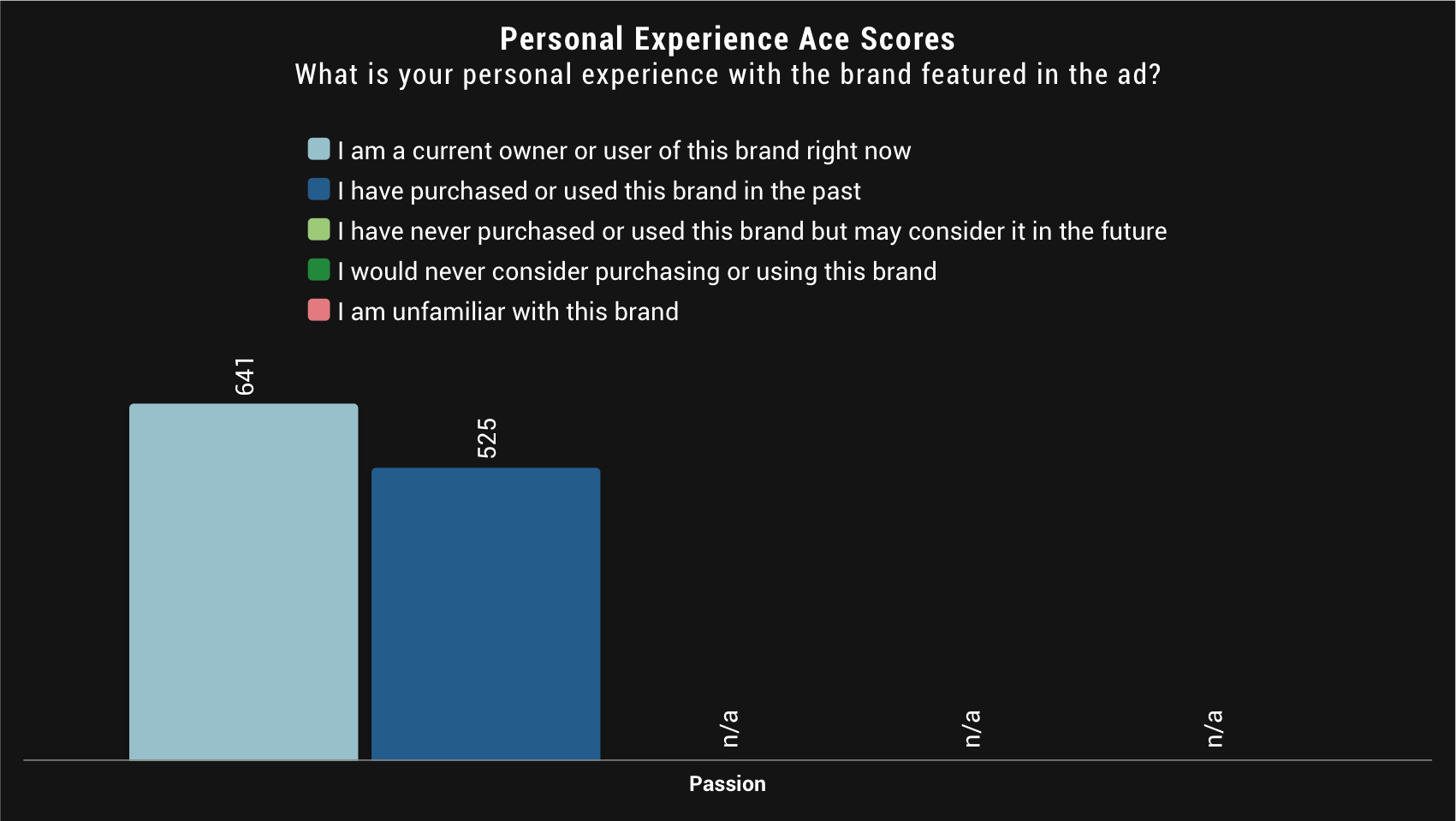 While Millennials have been the hot topic as of late, perhaps you are trying to stir a reaction from another demographic. With large, balanced samples and a syndicated database of more than 40,000 ads, we have the historical insights and the realtime methodology to help you develop your most effective creative for any population segment.