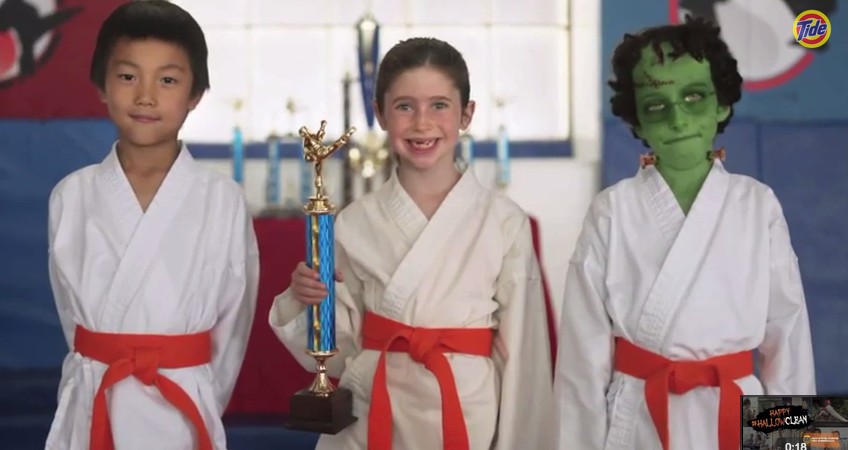 Do you suppose Halloween will ever be a big time advertising event worthy of inclusion in the “Holiday” season? Here’s a look at the few, random even, brands that chose to incorporate Halloween into their most recent new creative. While insurance and laundry detergent may seemingly have nothing to do with Halloween, some brands manage to remain relevant and entertaining to catch and refresh consumer attention.

Cheetos has run a Halloween campaign promoting its beloved classic cheese puffs and its new “Bag of Bones” skeleton shaped snacks. “Halloween Party Fun” shows how one man’s out-of-the-bag thinking gets him chased down by partygoers who crave a taste of his costume. Halloween is a new theme for the snack maker. Both ads performed particularly well with the mature women, ages 36+, who scored both ads well above 700 for the breakthrough components, Attention and Likeability.

A rousing 24% called “Halloween Party Fun” “funny” versus only 9% for the “Woman Picks Up Man with Skeletons” – but Cheetos enjoyed great brand recognition with 16% of respondents for both ads mentioning the brand’s name in their optional responses.

More than 600 people left optional verbatims for these two ads. Nine percent mentioned “Halloween” and the fun connection to Cheetos. 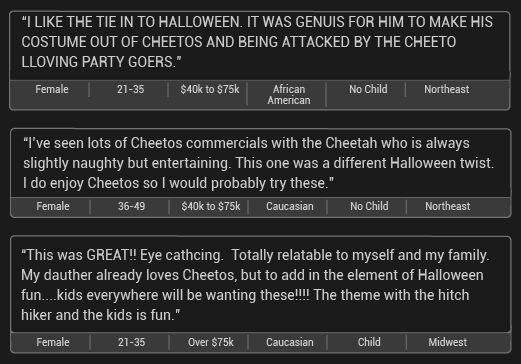 IHOP introduced “Creepy” to promote its scary-faced pancakes for the month of October. While not as wildly popular as its recent Ad of the Week winner, “Waffulicious” (bacon waffles anyone?), “Creepy” breaks a record for IHOP on Emotion. The brand hovers around the mid 60’s for the majority of their ads, but this short, 0:15 spot filled with whipped cream and candy corn pancake faces delivered an Emotional Sentiment score of 78, 20% above IHOP’s average and 30% above the Casual Dining norm.

So what was the best thing about this quick ad? Twenty-six percent of respondents said it was the deal, kids eat scary pancakes for free on Halloween (and cheaply for the other 30 days of the month). 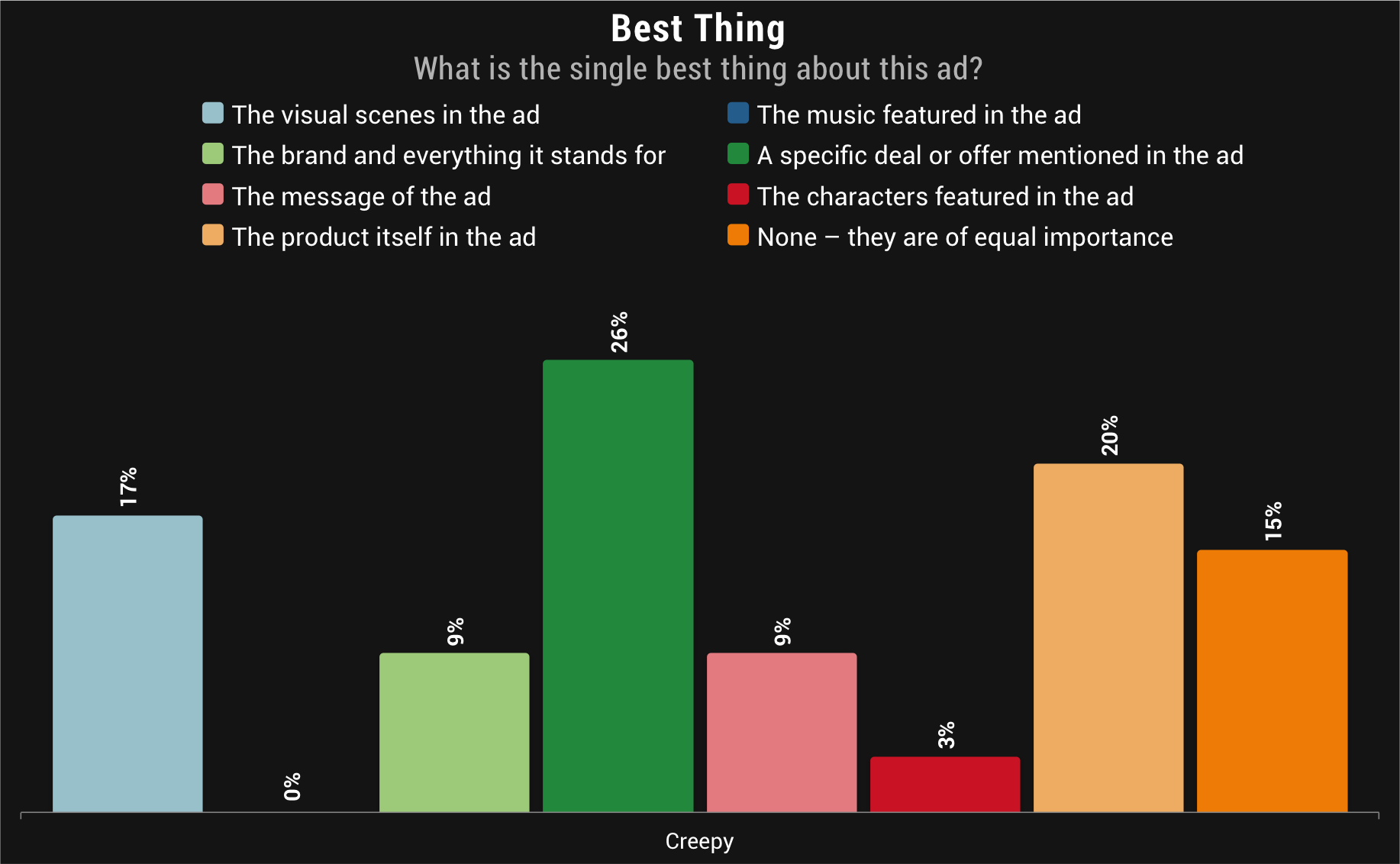 If you watched the World Series at all, you saw GEICO’s spooky ad, “Horrible Choice,” several times, at least once per game. While the ad provides little information about the 15-second insurance brand, it overachieved in terms of Attention, scoring 6% above the 90-day Auto Insurance norm.

Consumers ages 21-49 especially liked this humorous parody, awarding it an Attention score of 709, 11% above norm. While the ad scores slightly below norm on Ace Score overall, 21-49-year-olds awarded it an Ace Score of 558, which is close to 4% above norm. 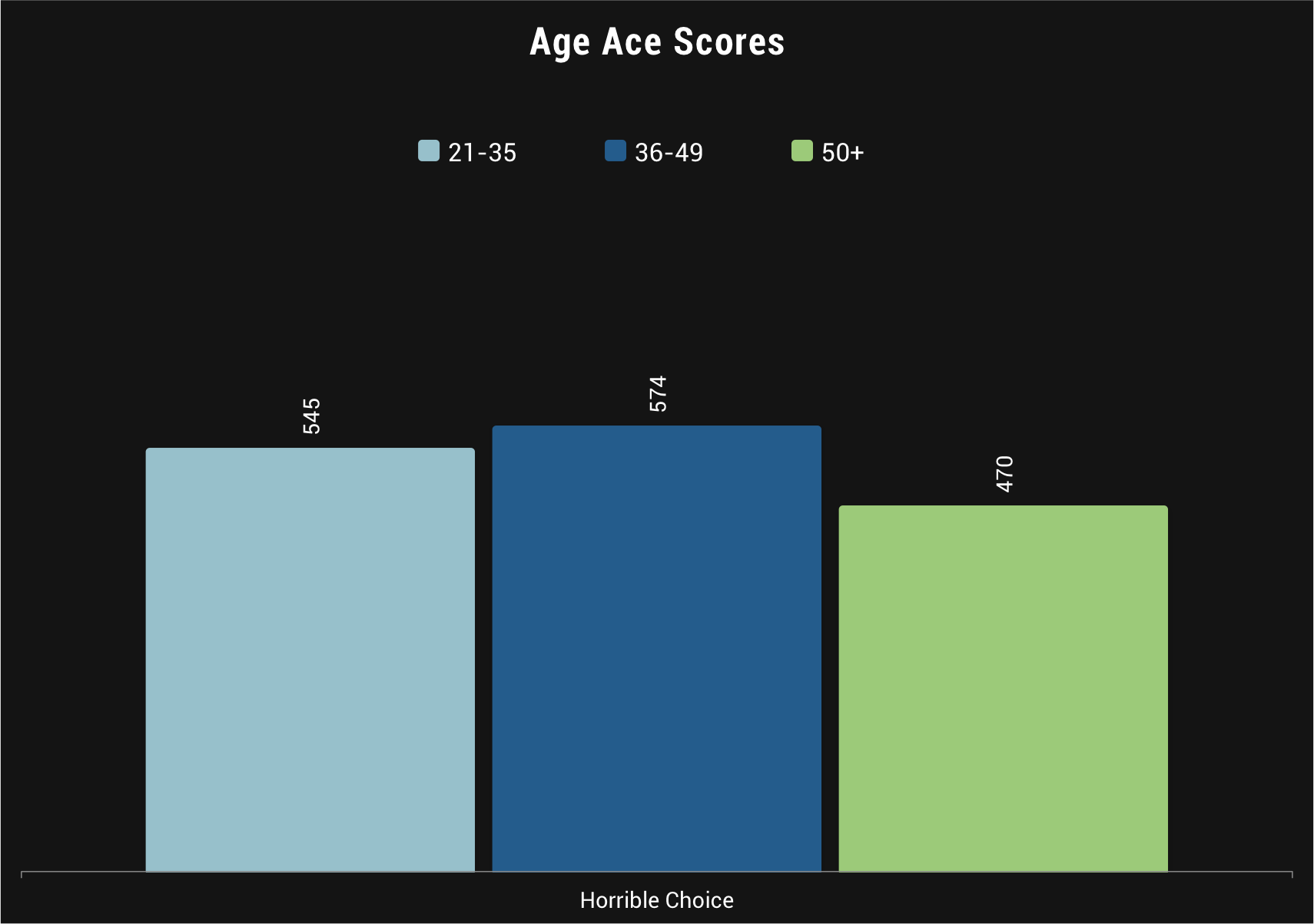 The younger demographic loved the ad for its humor and storyline. Twenty-four percent of 21-49-year-olds mentioned the ad was “funny” while 6% said they appreciated GEICO poking fun of “horror” movies. While the spooky ad was entertaining for this demographic, 4% still mentioned how GEICO can “save” you money on car insurance. 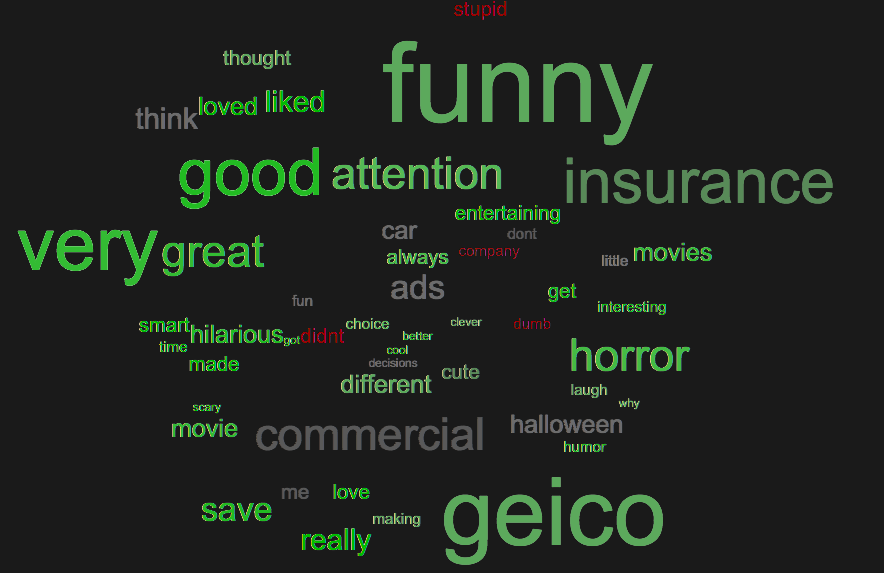 While the tie between auto insurance and Halloween may be a weak one, GEICO was able to entertain consumers under 50 and still reinforce its brand messaging in a humorous way.

Tide also threw a towel into the Halloween ad game this year. Its 0:15 ad “Sharp as a Serpent” is a variation of its previously run ad “Mother Washes Her Daughter’s Gi.” While a couple of the lines are different, they also made one of the children into Frankenstein during the post-production of the ad.

Many consumers commented on how they had seen the other variation of this ad many times before. The Halloween twist, however, added something new that revived the ad’s well-known content. Eight percent of the 318 consumers who chose to leave a comment for the ad mentioned “Halloween.” 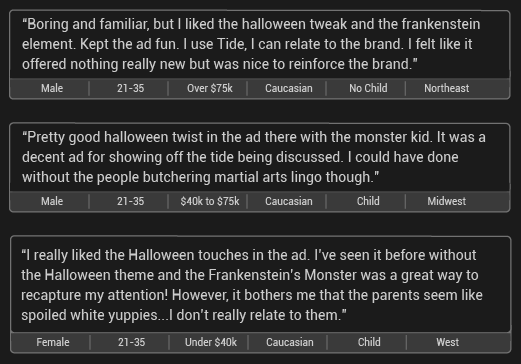 While the ad’s brand and product won over 18% and 24% of consumers, respectively, still 14% said that the ad’s characters were the best part of “Sharp as a Serpent.” 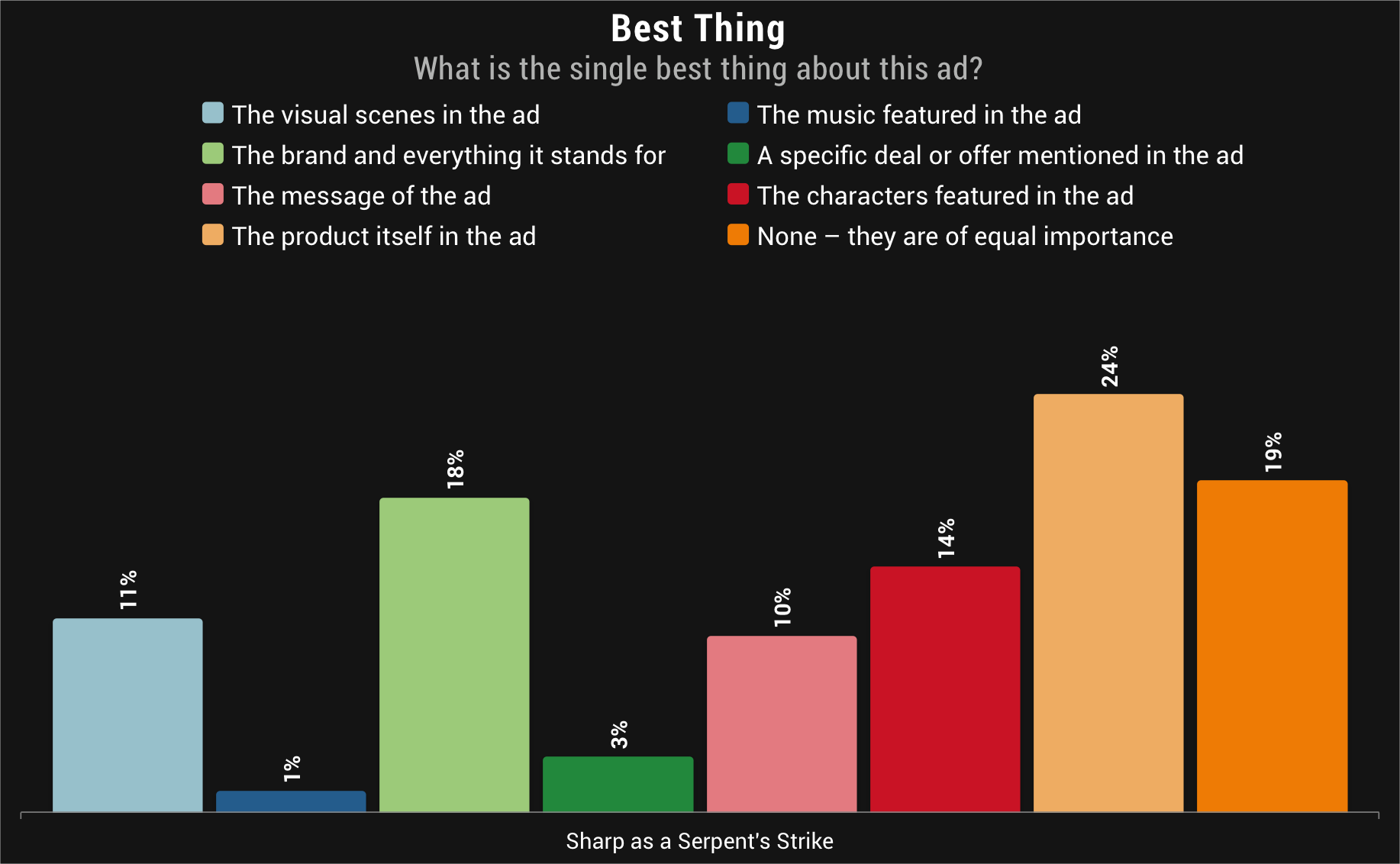 While this is just a splattering of some of advertising’s Halloween themed spots, we found many more hiding in the darkest database’s corners. Contact us if you’re interested in knowing how your spooky spot compares.