Luxury Automotive maker, Mercedes-Benz, takes home the prize this week with the innovative new ad, “Like A Human” (Ace Score: 639). Mercedes demonstrates a safety feature of their newest vehicle, which can detect objects in front of it and automatically brake in the event that the driver isn’t quick enough. Interestingly enough, this is not the first automotive ad featuring product innovation to make our Ad of the Week list. Buick’s “Be Ready” from this year and Ford’s “One Foot Forward,” 2012 Ad of the Year winner, precede Mercedes with this accolade.

Viewers were impressed by the technology (used in 14% of the verbatims), especially Females 50+ who scored the ad 28% higher than the Luxury Auto norm of 549. All gender/age demographic breaks scored well above the norm, giving this ad a 16% boost above the average. 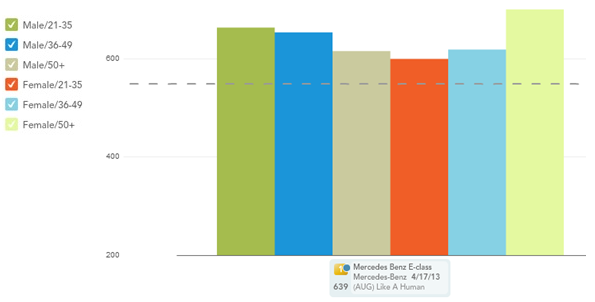 Information and Desire scores were well above the averages but Attention was the only component score to come in over 700.

“Like A Human” is the second highest scoring Mercedes-Benz ad this year after their Super Bowl ad, and is also in the top ten highest scoring Luxury Automotive ads from the last 12 months. The ad’s success can be seen in the word cloud, which is covered in green and scattered with words like “good,” “interesting,” “love” and “attention.”