We don’t hear a lot about Office Depot in the retail category, but their new, techy ad campaign seems to be a real winner with consumers. Breaking beyond binders and notebooks, Office Depot has now debuted two national ads highlighting cutting-edge technology devices—both of which have delivered the goods. Clorox also aired an ad this week that hit home with many consumers, especially this time of year when fighting cold and flu germs may feel like a parent’s full-time job.

Office Depot’s latest ad “Got It At The Office” came in with an Ace Score of 621, over 25% above the Other Retail Stores category norm. This home run for Office Depot is a 30-second spot that features a Wi-Fi security camera, a waterproof phone case and an Office Depot credit card reader all being used in the daily life of a landscaper.

At first watch, this ad may not seem to stand out from the crowd, but Office Depot included several creative elements in the commercial that made it stand out for consumers—this ad focuses on popular technologies not often advertised, shows the products being used in real life situations, states where these products are available, and closes with a promotion.

In the optional write-in responses from our survey, many consumers mentioned the various technologies from the commercial with strong positive sentiment. Consumers also noted that the main actor in the commercial seemed authentic, as if he really uses the products he bought from Office Depot, which is consistent with what we also saw from the female version of the ad. 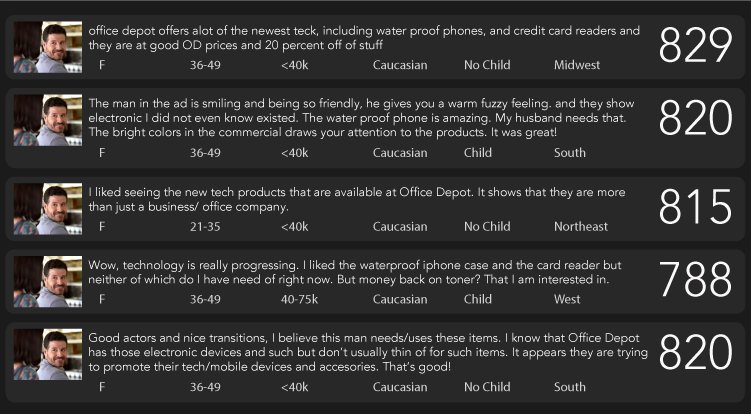 You likely noticed how many times Office Depot was mentioned in just 30-seconds—four times verbally and three times with on-screen text. From the beginning to the end of the ad, there is no question regarding what company the ad is for as noted by the strong brand mentions. “Office Depot” was mentioned in 25% of the optional verbatim responses. Another 15% of consumer responses brought up the new, innovative “products” in the spot. 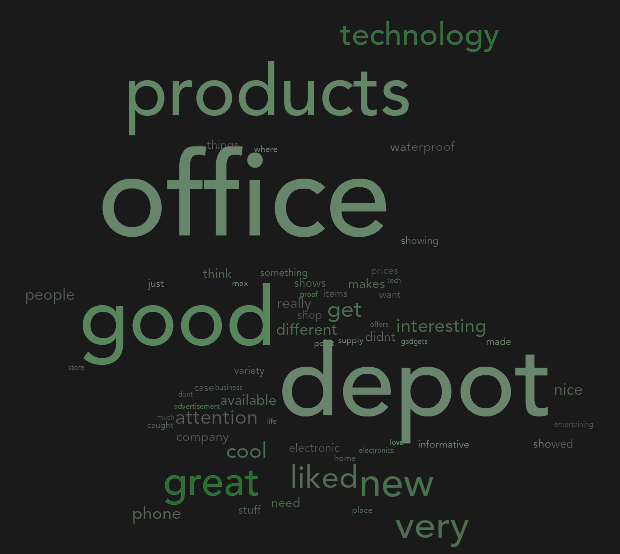 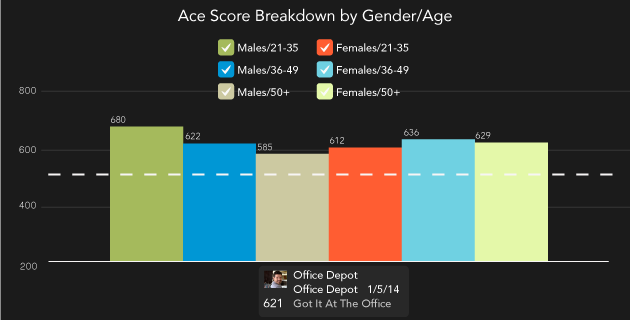 Office Depot’s “Got It At The Office” is an excellent example of an ad whose success can be sufficiently explained with the Ace Metrix LIVE platform’s quantitative and qualitative data. As Office Depot further distinguishes itself as a tech retailer for everyday consumers, they may turn out to be a brand to watch.

Want to look back at 2013? Watch the winning Ad of the Week Category Overachievers from 2013.

‘Tis the season—for cold and flu germs, that is. “Make Sure Germs Don’t Stick Around” is Clorox’s newest spot as well as the ad with the highest Ace Score to debut last week. With an Ace Score of 662, Clorox’s germy ad shows the reality of what little kids bring home from a day at daycare.

As you would expect, consumers with children in the home were particularly horrified by what their little ones were carrying with them throughout the day. These parents rated the ad 11% higher than consumers without children at home. 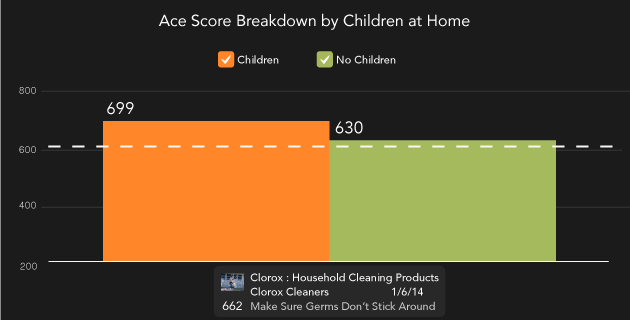 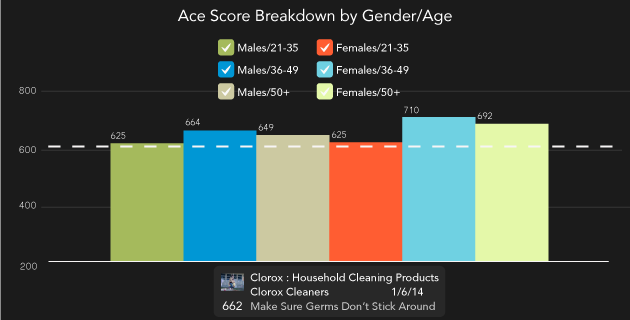 The ad’s components that garnered the highest scores from consumers were Likability and Attention, both scoring above the 700 mark. In the optional verbatim responses, many consumers noted that they were curious as to what was going on with these objects sticking to children and were surprised by the culprit.

It is worth noting that this is one of Clorox’s highest rated spots in our system. The :15 version of the ad also scored within 10% of this winning ad, making it a great contender to ease the cost of media spend while still advertising the Clorox brand.

Want a look back at 2013? Watch the winning Ads of the Week with the highest Ace Scores from 2013.

P&G Picks Up Where it Left Off