This year’s Back to School season drew 55 ads from 24 brands across 13 categories. While the overall ad volume was down about 11% over 2012, this season saw some new brands in attendance and some dropouts. Unsurprisingly, retail represents nearly 82% of the volume, split among department stores, discount stores, online and other (tech, office supplies, specialty shops, etc.) 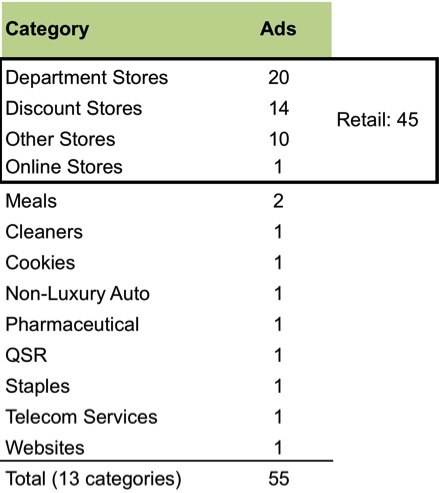 Of the 14 retail brands to air Back to School themed ads, Best Buy earns the honors for their ads which earned an average Ace Score of 564, 15% above the category norm. The ads take consumers on a journey with featured student, pairing the perfect tech items with their specific dreams (ie: major). Consumers found the ads music and visuals “catchy” and 19% of the combined verbatims mention “Best Buy” by name.

The second highest gap to norm brand is Office Depot who created a campaign featuring the band One Direction. One ad “Move Together” stars the band members promoting an anti-bullying program the brand sponsors. Other ads feature school supplies stamped with the band’s faces and groups of kids enjoying their new supplies and tech gadgets – touting the phrase “Where’d ya get that?”  Office Depot earns three spots on the Top 10 list of most effective Back to School ads.

A definite sign of the times, technology and gadgets dominate the season with brands like Best Buy, Office Depot, and H.H.Gregg featuring tablets, phones and computers in their school-bound ads.

Outside of the Retail category, Verizon Wireless aired the third most effective ad of the group with “Face to Face”, (Ace Score 544) 8.5% above the telecom services category norm.  The ad depicts the first day of school for brother and sister high-schoolers while demonstrating some of the features of the Samsung Galaxy S3. The ad also earns Verizon a most improved moniker, performing 5% better than their 2012 Back to School creative. 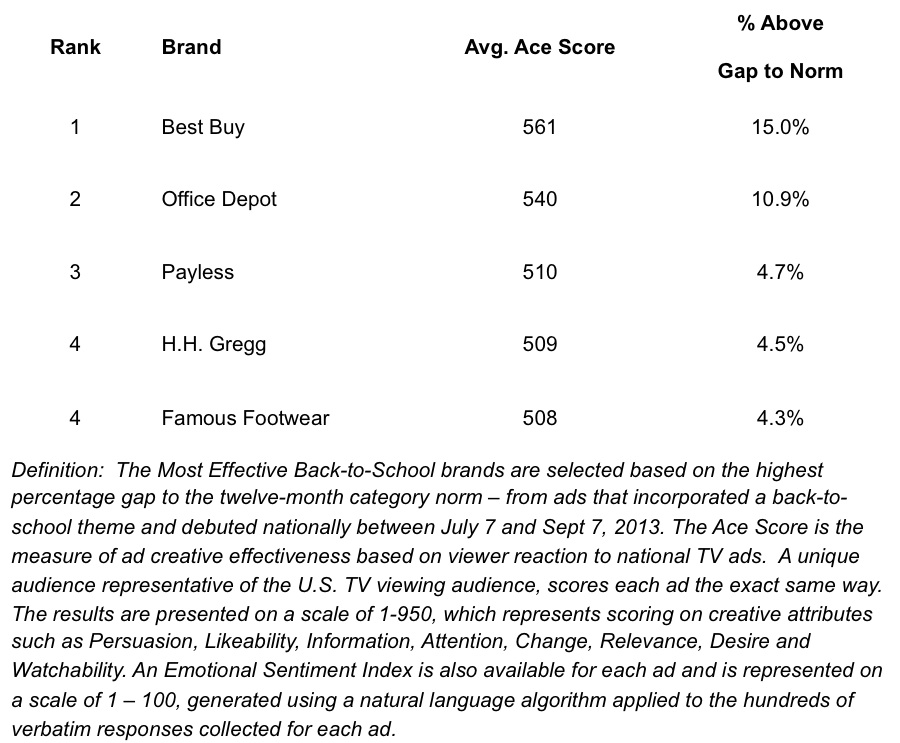 (Highest Percentage Gap to Category Norm based on Ace Score) 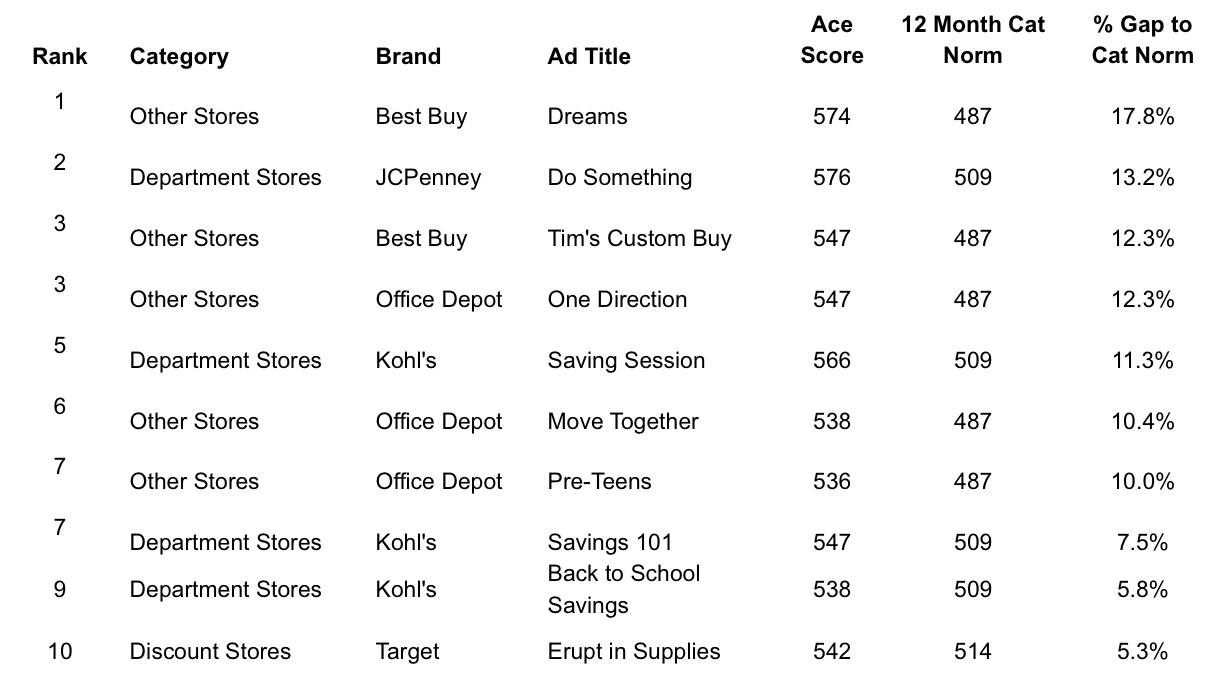 This year’s top scoring ad, for the third year running, comes to us from Lysol. “Healthy Habits Week” (Ace Score 595) promotes the partnership between Lysol and teachers across America to educate kids on fighting germs and developing healthy habits. The ad earns a 595 – an upper middle quintile for the Cleaners category, but the highest scoring among the Back to School themed ads.

The highest scoring Retail ad was JCPenney’s “Do Something” (Ace Score 576), which also earned the highest scores in the class in terms of Change and Information.

While JCPenney aired the most Back to School themed ads, this spot was the standout performer, all others falling below the Department Store and Retail Industry current and 12-month rolling norms.

Similarly, Target earns the final spot on the top 10 most effective ad list for “Erupt in Supplies” (Ace Score 542), 5.3% above category norm. The ad features two grade school kids successfully erupting their artfully crafted volcano to the whimsical instrumental tune of the Queen classic “Under Pressure”.  An incredible 20% of optional verbatim responses include “Target” – the ad hits most persuasion components – falling shy on Information and Desire, components that remain a challenge for Target in the rest of their BTS portfolio.

New brands to the classroom this year came from some unlikely places.

Famous Footwear, H.H.Gregg, Payless join the ranks of retailers and of the new crew, perform best – each with top quintile ad. CPG brands try to leverage the season to remind folks what to feed kids throughout the day – but struggle to outperform their category competition. 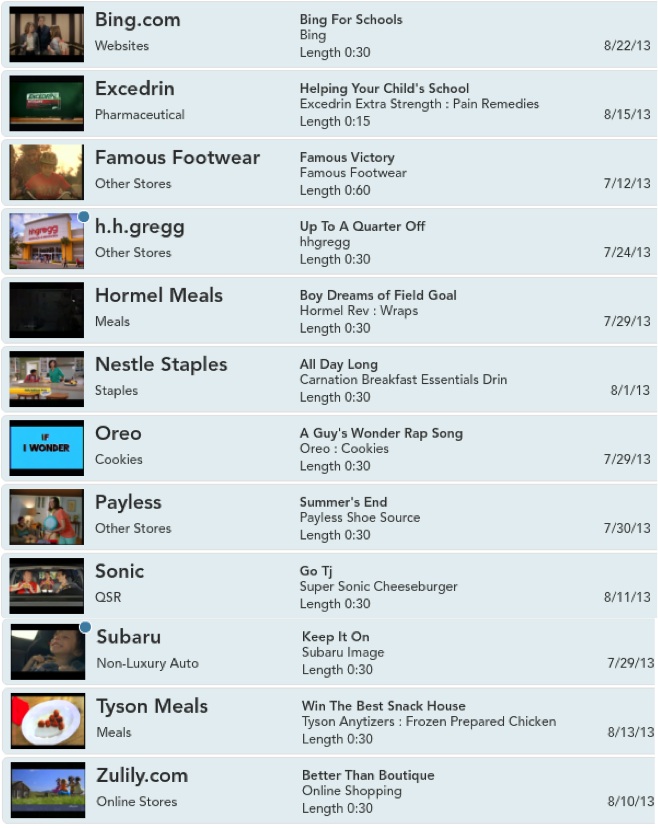 We never like to point out the bottom of the lists or the least effective ads, but as our adage goes – You can only know how well your ads perform, if you know how well every ad performs. In this case, the most prolific advertisers are also the ones with the slipping grades. JCPenney and Target both aired more new creative for Back to School ads this year (6+), and both slipped from their previous years average Ace Score by 12% and 14% respectively. As was pointed out earlier, both brands had a single ad strong enough to make it to the most effective ad list – yet the majority of their portfolio was less than effective.

Staples and Macy’s both chose to run significantly fewer ads this season than previous years and unfortunately those few were 9% and 7% less effective than the 2012 batch.

These are just the highlights of the volumes of data we have on events like Back to School. Contact us to discuss this or any of the advertising events such as Holiday, Super Bowl and the Olympics – where our year over year analysis and key learnings from the largest database of ads in the world can help inform your creative and media planning decisions.

Spy vs Spy: You Lose

Ad of the Week: Guinness “Friendship :60”