It was 1979, and Coca-Cola and Pepsi were at the peak of the Cola Wars. The Pepsi Challenge was going strong and Coca-Cola was starting to hatch this thing called “New Coke”. Still, during the Super Bowl that year, between the Pittsburgh Steelers and the Dallas Cowboys, Coca-Cola delivered a commercial that would become an instant classic for the brand and go on to become a cultural touchpoint that inspired both copies and parodies. The ad, of course, featured Steeler’s star defensive tackle Mean Joe Greene tossing his shirt to a young fan in the tunnel in appreciation for sharing his Coca-Cola. This year marks the 35-year anniversary of the original airing, and if that doesn’t make you feel a bit old, the young fan from the ad will be celebrating his 42nd birthday.

Thirty-five years after the original airing, the ad still resonates with viewers. We put it in front of 500 consumers and asked them to score the ad based on our algorithm to determine how effective the creative is today. Turns out, it is very effective. In fact, using our data from the past year, the ad ranked second among soda ads. Who was first? Pepsi’s Throwback Thursday entry “Pepsi Generation,”

Even though this ad aired quite some time ago, consumers still found it relevant. It scored 13.9% above the other Coke ads from the past six months. This also exceeded the average relevance score for soda brands by 14.5%. The fact that people consider this ad relevant nearly four decades later shows how timeless it is, due in part due to the commercial’s ability to connect emotionally.

Here is a snapshot of the ad’s Persuasion components and how it compared to other ads on Relevance:

As noted, the sentimental feel of this commercial helped it soar over the average soft drink score, posting an Emotional Sentiment score of 76, which is 46% higher than other soda ads and 31% higher than other Coke ads – both over the last year. Of the 352 verbatim responses, many mentioned the strong emotional feeling they felt while watching the ad – cutting across age, gender, income and ethnicity. Looking at the words within the cloud, one noticed the positive and emotional language used. We have selected some representative verbatims that speak to the strong connection that respondent felt toward the ad – despite their ages. 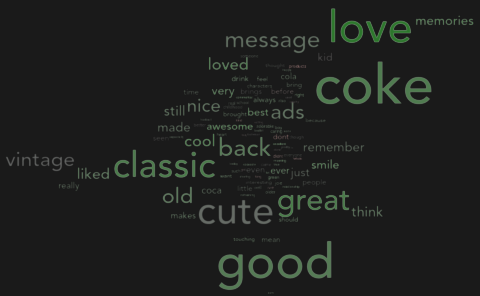 Despite his on field persona, turns out that “Mean” Joe Greene is pretty likable. This throwback ad scored 16% higher than the average soda ad from the past 180 days. Furthermore, the ad received a likability score 6% above the other Coca-Cola ads from the past six months. These scores are pretty good for an ad that originally aired in the 70s.

While many of the respondents reference their love for an ice cold Coca-Cola, Mean Joe might have felt differently at the end of the shoot. According to some reports, Mean Joe Greene drank the equivalent of 24 cans of Coke while filming. Coca-Cola revived the idea in 2009 with modern NFL star Troy Palomalu to launch their new Coke Zero brand. Three years after Coke Zero re-made the ad, Procter & Gamble even parodied this classic Coke ad with a much older Mean Joe Greene.

While the re-make with Troy Palomalu proved to be successful – it didn’t reach the same heights as the original, something we see here at TBT. Great creative is like a lightning bolt – it is hard to bottle. Still, this is one piece of creative that has aged well. Don’t hesitate to tweet us with more suggestion for TBT at @ace_metrix on Twitter.