Last week Apple released a behind the scenes video as a follow-up to the wildly popular ad “Timer” starring Cookie Monster. Why not capitalize on the popularity of the first ad which charmed viewers and opened the door for greater interaction between Cookie Monster and Siri? Given how well the original ad performed in our testing, we tested the new digital only 90-second video to see if it possessed similar characteristics to the 60-second TV version. Here’s what we found.

Both ads scored incredibly well in terms of the holistic Ace Score – 668 for “Timer” and 652 for “Timer – Behind the Scenes.” These scores are 11% and 8% above the category norm for Mobile Devices, respectively. Neither ad is at all polarizing, with “Behind the Scenes” seeing a Polarity Score of 35 compared to 33 for “Timer.” These scores are within the low polarization range. It bears mentioning that these comparisons are made possible by the use of the same methodology across digital video and TV ads. Ace Metrix employs the same testing methodology to allow brands a holistic view of the creative impact of their ads across screens.

The Ad Personalities are quite similar for both versions, with “Behind the Scenes” demonstrating slightly higher breakthrough power driven by strong Attention and Likeability scores (756 vs. 743 Attention Score and 753 vs. 741 Likeability.) This is commonly seen in longer format content as the brand has more time tell a complete story and hook viewers. The Ad Personalities below illustrated the similar characteristics for each video. 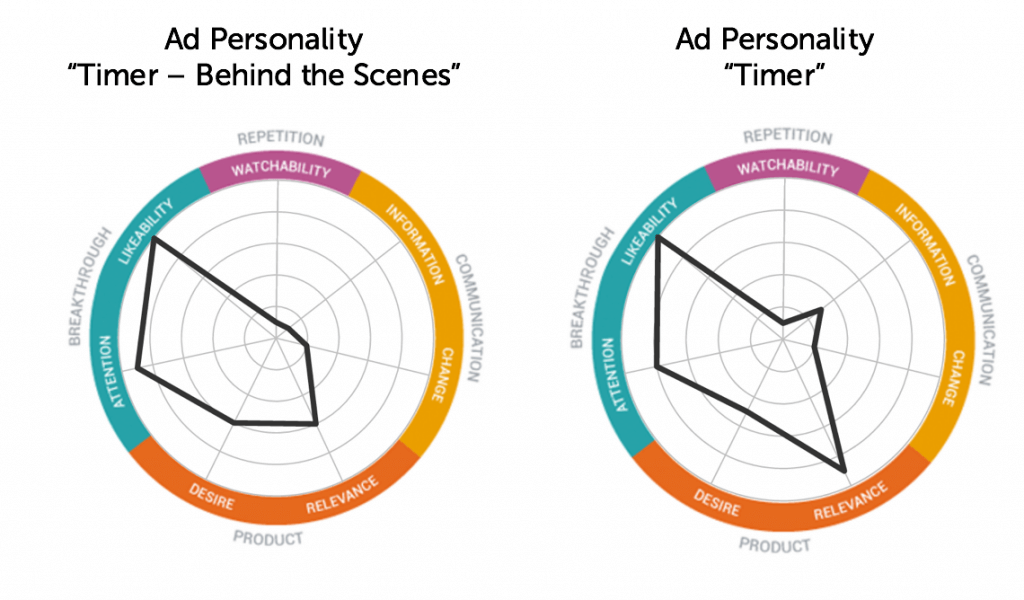 Going beyond the Ad Personalities, we compared performance across our other key measures. Across the board, both ads delivered high scores and the differences are slight, but still worth looking at. While the longer version scores higher for Attention and Likeability, “Timer” garner a higher Watchability score. This score measures the viewer’s willingness to view an ad again. We often see that longer format ads, while great at capturing Attention and making emotional connections, score lower in this metric, as the viewer may not wish to invest the time to view it again. We also see in the chart below that the TV ad does a better job in the areas of Information, Change, and Relevance. These are often stronger for TV ads than viral videos, which aligns the typical goals of a TV ad.

Interestingly, the longer ad showed much higher brand recognition, with 68% vs. 30% naming Apple as their answer to the open-ended question asking who the advertiser is. This could be due in part to “Behind the Scenes” having twice as many mentions of Siri by name (6 vs. 3). The longer video also incorporated more direct engagement between Cookie Monster and Siri, approximately 40 seconds vs. 20 seconds. This deeper engagement includes Siri calling Cookie Monster by name, much to his delight, with him exclaiming, “You know me!”

When we examine the 385 viewer verbatim response collected for “Behind the Scenes,” we see high usage of the words “love” (20%), “funny” (17%), and “cute” (12%.) This is well aligned to how viewers described “Timer.” Apple sees continued success incorporating a beloved character and humor with their product. Even people who aren’t Apple users or fans enjoyed watching, with one viewer commenting, “I LOVE this commercial, but I still never buy Apple. I would watch this every time. For cookie monster only.”

Apple delivers a great example of how different formats can compliment each other within a campaign. Both of these ads perform exceptionally well and the differences align with our historical data trends. Longer videos allow for higher Breakthrough component scores (Attention and Likeability), while a shorter ad often demonstrates better Communication and Product component scores (Information, Change, Relevance), in addition to higher Watchability.