In addition to COVID-19, there’s another unique element among this year’s holiday ads.

The United State’s confrontation with racial injustice after the death of George Floyd sparked pledges for change in the advertising industry. There was a lot of skepticism about whether or not those pledges would come to fruition. Well six months later, brands are staying true to their word of more diverse and inclusive advertising. So much so, there’s been a measurable shift in ethnic representation in holiday ads.

This year, 26% of holiday ads did not feature any characters (vs. 20% in 2019). These were more product-centric spots and/or value-driven promotions. This change could be a reverberation from COVID’s impact on commercial production, where brands focused on products in lieu of entertaining through characters.

In recent years, brands have started to inch towards more diverse casting and storytelling, but nothing has swung the pendulum quite like the latest calls-for-action in support of the Black Lives Matter movement. Of the remaining ads with characters, those featuring a Black-only cast increased nearly 10% compared to 2019’s seasonal spots. Moreover, incorporating multiple ethnicities in one ad was the most popular approach from brands — a trend that carried over from 2019: 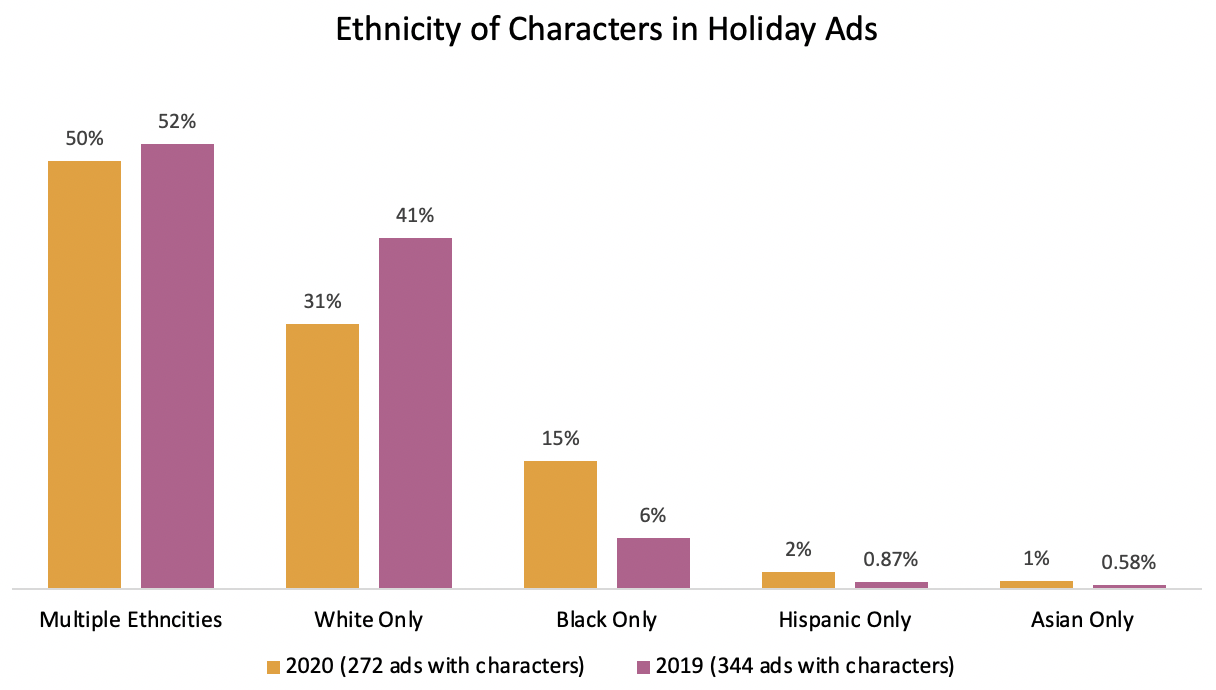 Among 2020 holiday ads, there was not an advantage or disadvantage between ethnic categories and Ace Scores for each were similar to last year’s. That said, 2020 holiday ads with Hispanic and Asian-only casts did significantly outperform those without characters: 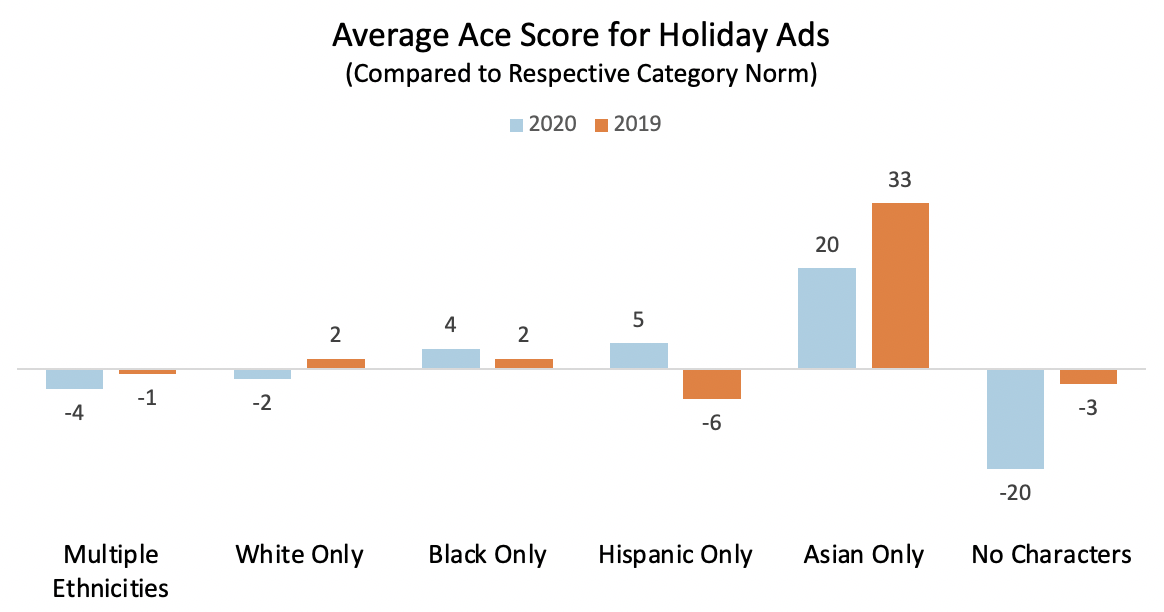 However, performance on Ace Scores cannot solely be attributed to characters’ ethnicities, which is evident in viewers’ verbatim comments about each of the holiday ads.

When Mentioned, Comments on Diversity are Overwhelmingly Positive

The voluntary open-ended question on the Ace Metrix survey is designed to be as neutral as possible in order to elicit organic responses specifically about an ad. This is done to ensure that comments represent the thoughts, feelings or criticisms that dominate the overall cognition of each viewer.

In response to 2020 holiday ads, diversity did not usually take precedence in viewers’ minds. A majority of viewers looked past the color of a character’s skin and instead expressed how they felt about an ad’s overarching story or message or were drawn to other elements (like music, deals etc). In fact, just over 10% of the 272 ads had at least 2.5% of viewers comment on ethnic diversity (or lack thereof). Banana Republic’s “Enjoy Now :15” garnered the most attention, but that was still just 10% of viewers commenting on the matter:

Viewers that were drawn to diversity in an ad were those that felt strongly enough in either direction (like ←→ dislike). Sentiment towards ethnic diversity for each respective ad was overwhelmingly positive with viewers expressing a general appreciation for the inclusive approach and emphasizing what representation meant to them:

“I was gratified to see African characters in everyday, mundane settings, showing love for each other while being depicted as they are, rather than watering down their skin, hair or familial relationships.” Male 50+

“I loved this ad! I am a frequent Target shopper so I would still shop there even if I didn’t see ads. However, representation matters and I love that this ad featured families of different races & ethnicities.” Female 21-35

“It had a good demographic and racial mix which is appreciated and looks more like the country we live in. I liked the sense of family which ran throughout the ad.” Male 36-49

“Loved seeing the diversity of the families in the ad. You don’t normally see this until February and it felt great to see people that looked like me.” Female 21-35

Some of the negativity stemmed from disapproval over how diverse characters were portrayed (eg. stereotypes). For example, in response to seeing a biracial couple (Black man, White woman) one Female noted:

“I don’t understand why there aren’t two same ethnicities in the ad. Why does it have to be the stereotype of the black woman being unappealing to black men? I found it offensive.”

The uptick in ads featuring Black-only characters is not going unnoticed by some consumers who find the “all-at-once” nature disingenuous and/or pandering. However, just 3% of the 433 comments, insinuated that they’re noticing particular diversity trends:

“I enjoyed the ad. But yet again, another ad featuring black actors. I myself am Hawaiian. My son is half white. My girlfriend is also half white. I have never seen an ad with my race in it. More so, it seems all ads of late have featured black actors. It’s very tiresome” Male 36-49

“Nothing wrong with mixed race couples, but they seem to be pushed as the latest fad.” Female 50+

“I love Target. I just spent a lot of money there today on holiday decorations and clothes but this ad certainly wouldn’t get me in the store if I didn’t already go weekly. I think companies should stop this political BS of blatantly placing black people in their ads just to show how progressive they are. I think it’s insulting, if anything.” Female 36-49

Looking at each individual ad, these negative comments were a needle in the haystack among viewers’ thoughts and feelings. Of the 28 holiday ads with mentions of ethnicity, only 3 registered signal on Exploit, which quantifies negative cultural perception from viewer verbatim comments and scores it relative to every ad we test. For those three ads, Exploit signal was minimal and was not solely sparked by viewer responses to ethnic diversity.

On the opposite side of the spectrum, 13 of the 28 holiday ads analyzed registered signal on Empower, which quantifies positive cultural perception from viewer verbatim comments and scores it relative to every ad we test. One of the most Empowering of the bunch was JCPenney’s “Happy Moments:

Viewers found the ad empowering not necessarily from the diversity itself but rather through relatable scenes that reminded them that warm, familial bonds are what the holidays are all about. “Happy Moments” scored above the average holiday ad on most traditional metrics (save for Information and Change), which drove strong positive purchase intent 8% above those same norms.

When All Is Said & Done…

The widespread (and unspoken) acceptance of diverse casting in holiday ads reveals that consumers expect to see characters and connect with stories that reflect the world we live in. Stereotypes, tokenism or forced situations stick out, as some viewers can recognize disingenuous attempts at representation. Instead, authentic portrayals that occur naturally through storytelling with relatable, universal truths reflect positively on brands.

Ace Metrix Year in Review: Most Popular Ad Insights from 2020