When life-as-we-knew-it came to a halt mid-March, brands and agencies were quick to adapt video ad production, relying on user-generated content, animation, stock and repurposed footage. As states ease into reopening after COVID-19 lockdowns, film production is finally getting the green light from California’s governor to resume operations on June 12th.

Ad Age recently revealed what those commercial sets might look like. However, some brands and agencies seem hesitant to rush back as they face possible insurance liabilities if anyone contracts COVID-19 on set. It’s ultimately up to the discretion of each brand and agency depending on their creative objectives as well as resources.

In order to lend some insight on the matter, we evaluated recent ads that relied on one or more of the non-traditional strategies from lockdown to see how the visuals impacted viewers:

We have not measured a drop in ad effectiveness scores from pre-COVID-19 times, indicating that what worked before could still work today. Sizable advertisers like Geico have the luxury to pull from a library of archived footage. Just for the brand’s auto insurance spots alone, we’ve tested 432 ads since 2010. One of the more effective ones, “Worst Time” from 2015 – which went on to win a Silver Cannes Lion – recently resurfaced at the beginning of June, but with some never-before-seen footage of the mom:

Both versions (circled in red below) scored nearly identical on quantitative measures — significantly beating their respective yearly Geico norms. Each one exhibited strong Breakthrough, measured by Attention and Likeability components, driven in large part by the Visual Scenes and Characters:

On top of that, Geico replicated the emotional impact from the first version with similar scores on Funny and Memorable, proving this entertaining concept has withstood the test of time. Memorable signal from the recent version validates the original’s effectiveness. Viewers of the 2020 ad mentioned a sense of familiarity and others recalled specific details from the original:

“I have always thought that these commercials were hilarious. never saw this version. I have only seen the one about the squirrels.” Male 36-49

“I swear I seen this ad or something similar. Just the ending was a bit different.” Male 36-49

“I have seen a similar version of this ad – only instead of the mother doing a puzzle, she is telling her son that there are squirrels in their attack (and you can see the squirrels running around the pool). This ad is still promoting Geico Insurance.” Female 50+

One concern with repurposed footage is that what was normal months ago might offend or confuse consumers now. It’s hard to imagine any brands that would have archived scenes that portray social distancing behaviors or actors wearing masks or gloves. Ace Hardware recently relied on repurposed footage in promoting its wide selection of grills with free assembly and delivery in “Good Quality”:

The absence of masks and other COVID-19 precautions did not negatively impact quantitative scores. Instead the emphasis on products and a deal/message (free assembly/delivery) earned “Good Quality” an overall Ace Score 8% above recent Home Improvement Store norms. On top of that, top-2 box purchase intent was at 57% – beating both its category norm (49%) and a recent Home Depot ad (48%) that addressed the “new normal” with visuals of people wearing masks, bumping elbows and more: 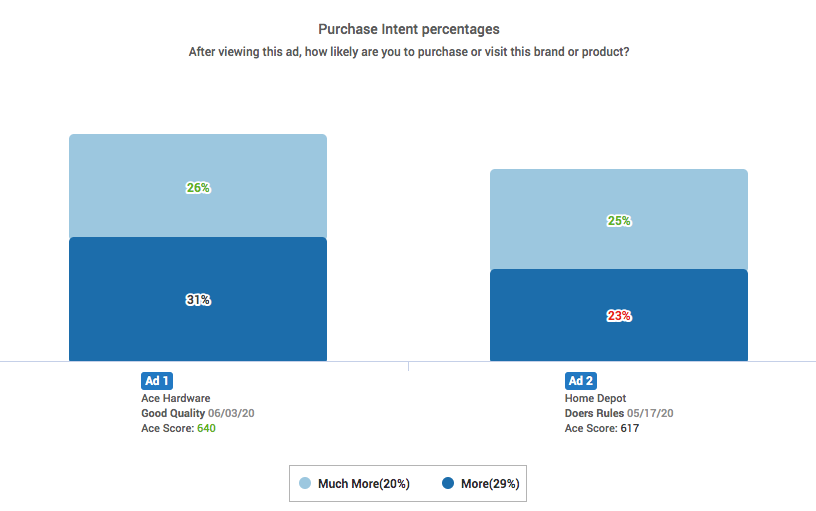 Only three out of nearly 400 verbatim comments mentioned that social distancing wasn’t portrayed in Ace Hardware’s “Good Quality.” Each of these viewers were aged 50+ suggesting that repurposed footage is more likely to offend or confuse those in at-risk segments.

Not the fastest workaround, but animation is one way that brands have managed to create original ad content while film production is on pause. As we’ve uncovered previously, animation is a viable option for storytelling and can work particularly well for unappealing or long-form educational content. Not that GrubHub was trying to do either of the latter things, but it is making its return to regular advertising with the help of animation in “Magic Bag”:

The animated visuals stood out more than the average Food Delivery ad from the past year, with 26% of respondents naming that aspect the Single Best Thing about “Magic Bag” (vs. 18% norm for Food Delivery). Informing about Grubhub’s Perks program, the spot drove top-2 box purchase intent among 66% of viewers, significantly beating the category norm of 54%.

Only 13% of viewers that referred to the visuals in their voluntary verbatim comments felt negatively towards the animation-style. Those that liked it found it more attention-grabbing and likable:

“I liked the animation style a lot; this felt more like the trailer for a movie I’d want to watch than just a commercial. I also liked the diversity a lot and showing a mixed family.” Female 16-20

“Liked the use of cartoon characters, caught my attention. liked learning about the rewards program, interested to learn more” Female 21-35

“The music got my attention the most. Animation was a nice way to present this ad. I really am not all that familiar with this brand so I learned they have a rewards program.” Female 36-49

When it came to ads that addressed COVID-19, we found that our youngest segment of viewers (16-20 year olds) responded favorably to user-generated content. As for regular ads, this style of visuals can also perform well. A recent short but sweet spot from Rice Krispies resonated with a broad audience across all demographics:

The product took center stage as the Single Best Thing about the ad, which was backed up with Prodtastic signal from Ace EMO. Meanwhile, the visuals enhanced the emotional impact of the ad, stirring up Wholesome and Nostalgic feelings among viewers. The combination of the product and the emotions from the user-generated content in “Kids Treat” lent towards strong positive purchase intent for Rice Krispies (56% vs. 48% for Cereal norms): 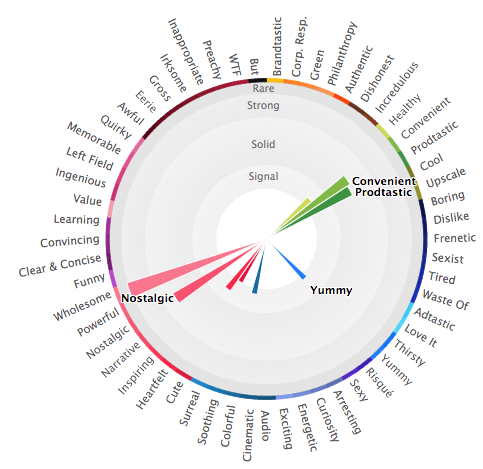 Ultimately, it is up to each brand and their agencies to decide if resuming production is warranted, but our data indicates that the alternatives used during the recent shutdown haven’t negatively impacted ad effectiveness.

Nike’s “For Once, Don’t Do It” Rallies Strong Support, But Not Without Controversy