We recently highlighted the challenges brands have faced when communicating their values in regards to the Black Lives Matter movement and ways to mitigate that risk. Since then, a number of advertisers chimed in, particularly during the BET Awards on June 28th. Some of which proved there can be more reward than risk when taking a stand on the matter.

In order to shed light on what is working, we analyzed some of the highest scoring Black Lives Matter themed ads from recent weeks. All of the following significantly beat the recent all-industry Ace Score norm of 544 proving ads can successfully weigh in on current cultural events.

One of the key takeaways we’re seeing for all culturally-relevant topics, whether it is COVID-19, pride, or BLM, is that consumers don’t want to simply be lectured to by brands. They want to know what brands themselves are doing to make a difference. Many consumers are glad to have brands entering these culturally significant and yet often difficult conversations, but it still needs to be done in a way that does not seem to be a cash grab.

NBA | “The Truth is #BlackLivesMatter”

Leading the pack with a PSA-style spot, the NBA also found success among its own ads with “The Truth is #BlackLivesMatter” ranking as its highest scoring ad ever. The Message, named the Single Best Thing about the ad by 48% of respondents, drove an impressive Likeability score of 727 – also the highest among Black Lives Matter ads.

The message’s impact was also reflected in emotional signal with “The Truth is #BlackLivesMatter” registering scores on Adtastic (general appreciation for an ad) and Corporate Responsibility (reflecting a brand/ad in a compassionate light). On top of that, it contributed to an Empower score on par with just 2.78% of all ads:

“I am glad that they are not afraid to speak out on the BLM movement and as a brand it is something to not be afraid about. I am really happy to see that.” Female 16-20

“I think the direction and stance of the NBA for putting out that message was positive and shows growth,change.” Male 36-49

“It’s important for people to understand what the movement means beyond assumptions. This ad accurately portrays that.” Female 16-20

In spite of this ad’s successes on traditional metrics, there were still areas where the brand could have improved. But was the most prominent emotional signal indicating internal conflict among viewers (eg. liking some aspects and not others). It also explains the Strong Exploit score of 3.2 (on par with 0.37% of all ads):

Looking at the source of this emotional and cultural impact – verbatim comments – it revealed that while viewers appreciated and applauded the message, the source of that internal conflict was often a sense the stance lacked credibility (which set off Incredulous signal in the Emo Plot above). In other words, viewers were looking to learn more about what the NBA was doing to help, with opportunity to build on that in future creatives:

“I like the ad but what was the purpose they didn’t specify exactly what they were going to do to make these changes. It didn’t feel sincere anybody can say anything but actions are louder than words. When I see changes being made I will believe them and support” Female 16-20

“I love that the NBA wants to get behind black lives matter – they should have been onboard. BUT – this seems a little pander-y. Like – what are they actually doing to make a change?” Female 21-35

“Love the message but worried it is performative, not backed up by action” Female 21-35

In contrast to the NBA’s direct, purpose-driven stance, Papa John’s secured the number two spot with a product-focused ad, “Making A Difference,” which ended with a quick mention of the brand’s charitable contributions towards fighting racial injustice (among other causes). The philanthropic message and the messenger (Shaq) were the main drivers behind the ad’s success. The charitable product tie-in was a strong incentive for viewers, with 70% reporting increased purchase intent (vs. 57% QSR norm).

“Making A Difference” was the only Black Lives Matter ad that did not register any signal on Exploit. Impressive considering the brand’s past racial controversy surrounding its founder. Instead, it earned a Solid score of 2.5 on Empower – on par with 2.78% of all ads and the NBA’s ad above. This impact was reflected in scores on Philanthropy, Corporate Responsibility and Love It.

The Prodtastic signal indicates Papa John’s pulled off promoting purpose and product in one ad – something just 5% of all ads did in Q2. It can be tricky for brands to navigate both in one ad as too much product when talking about purpose can come off as a cash grab. However, by giving back, Papa John’s avoided negative Cultural Perception (Exploit). A sample of viewer comments about “Making A Difference” demonstrates how viewers received the product and purpose:

“I was impressed with the appearance of Shaq in the commercial. Not only was he funny, but he brought awareness to a cause (and pizza brand) that I feel strong about supporting” Male 16-20

“I love the fact not only one of my favorite celebrities, Shaq, has his own pizza named Shaqeroni. but I love the fact that it has a powerful meaning and represents racial injustice and also boys and girls clubs.” Female 16-20

“Great ad. I have to ask, IS there a Shaq-a-roni pizza on the menu like, permanently, because this is a GREAT idea. If I want to have money to go to charities, then the Shaqaroni, and if not, then the Pepperoni. This would be hot for a long long time.” Male 36-49

The most Empowering of all the Black Lives Matter ads so far is Coca-Cola’s “The Change,” which highlighted black individuals’ achievements and contributions. With a score of 4.1 on Empower, “The Change” broke into the Rare band of signal – something only 0.6% of ads have achieved. The message wasn’t scored as highly as some of the others on the list, particularly Sprite’s ads, but nonetheless contributed to its positive cultural impact. Beyond that, viewers found the inclusion and elevation of black stories from a big brand empowering, as demonstrated in the following verbatim comments: 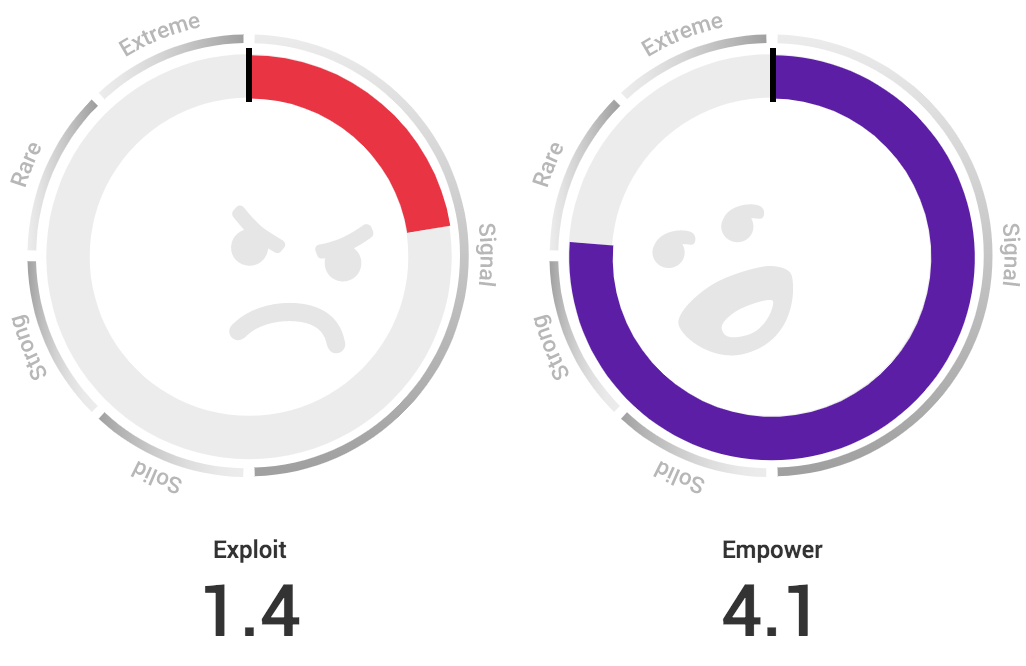 “I love when companies use their power to uplift black people and show their support in the current events occurring in the U.S. I also appreciate that instead of just using black accomplishments for marketing, they gave the names and occupations/brands of these black individuals. Good job.” Female 21-35

“It was nice to see a commercial showing black individuals doing good things and accomplishing big goals, and being successful, because there are! Unfortunately, black people are shown more in a negative light. I am proud that a big company is stepping out of their comfort zone.” Female 36-49

“I feel very good about the ad because of the characters in the ad. The company is featuring many many powerful black men and women which is empowering and powerful when perceived by the observer.” Male 16-20

There was marginal Exploit signal stemming from viewers who raised concerns about the brand itself and a sense of capitalizing on current events – some perceived this after the “unrealistic” scene where an Olympic swimmer drinks soda after her race. However, there was significantly more Empower signal, landing “The Change” in the Universal Appeal quadrant as shown below. 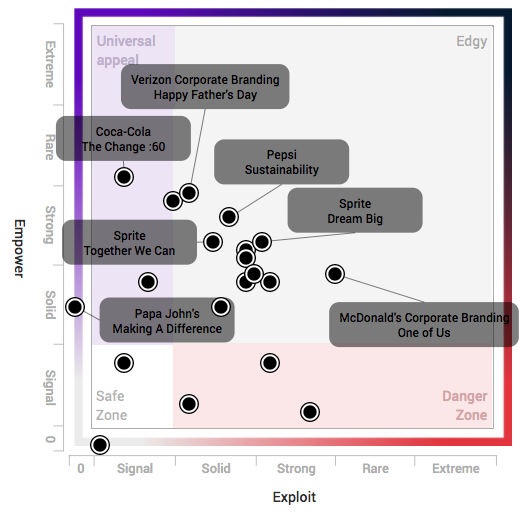 The three other Black Lives Matter themed ads from soda brands landed in Edgy, along with a majority of recent ads that took a stand on the matter including Nike’s “For Once Don’t Do It” and McDonald’s “One of Us”. Edgy ads are polarizing when it comes to Cultural Perception, there are some who find them Empowering and others who find them Exploitative. Brands should not be scared of scoring in this zone, but they should be prepared. 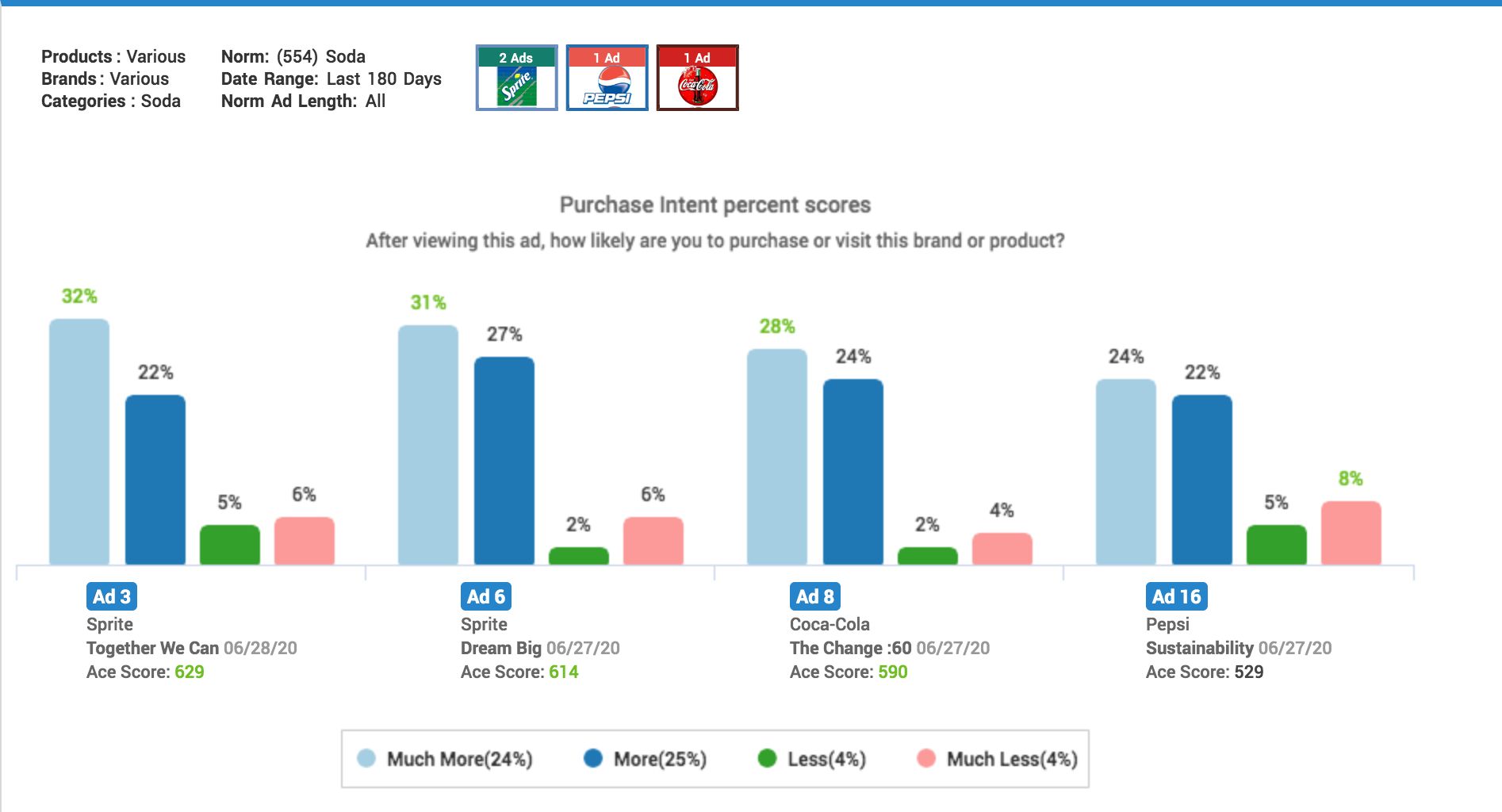 Given how sensitive this matter is, with 19 of the 20 Black Lives Matter ads we’ve tested registering some amount of Exploit signal, these top ten ads successfully navigated the risks and earned Ace Scores that outperformed recent all-industry norms. The approaches range from blunt to more muted, but each brand found a way to communicate a stance that worked for them.