With holiday ads abound in 2020, it comes as no surprise that quite a few celebrities are making guest appearances — 20 to be exact. From Snoop Dogg and his sea turtle friend teaming up with SodaStream to Carrie Underwood starring in a Ring doorbell-shot music video, the levels of creativity seen throughout the year continue to prosper this holiday season.

During a tumultuous time for everyone, seeing celebrity faces provides an opportunity for brands to better connect with viewers by providing a point of familiarity. In sparking some of the classic holiday emotions seen in years past, savvy brands are taking a comforting approach in their ads – a theme that’s been ancillary to those leveraging big-name celebrities in just the right way. The following spots scored above the norm on one or more metrics while letting the respective celebrity (or celebrities) carry the creative.

Best of the Bunch – Capital One | “Instant Search”

This Capital One spot marks the comeback of the famous Pulp Fiction duo, but for a much more festive occasion. Starring John Travolta and Samuel L. Jackson, “Instant Search” swept viewers away by firing one of the widest arrays of emotions – along with SodaStream’s Snoop spot (further below). It’s the funniest of all the 2020 holiday ads featuring celebrities as well. Among the other emotions evoked, the Pulp Fiction reunion in “Instant Search” created a sense of Nostalgia among viewers: 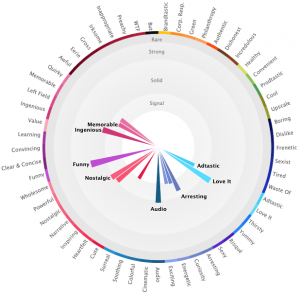 “I liked John Travolta as Santa. His dance at the end was reminiscent of his Pulp Fiction character. That was a nice bit of nostalgia. I like that the tool would help me save during holiday shopping. It’s a very timely resource.” Male 36-49

“I think this is a brilliant ad and I love that John Travolta is Santa and Samuel L. Jackson is awesome as usual. Very memorable.” Female 36-49

“Fantastic, Travolta, Jackson and Pulp Fiction incorporated into a Christmas ad. I truly enjoyed it and learned something.” Male 50+

As seen in the second-by-second trace results below, Travolta and Jackson’s combined star power kept viewers across age groups highly engaged throughout the 60-second spot. As expected, engagement rose notably at the end during Travolta’s throwback dance moves, particularly among those over 50 who would have been prime viewers of the 1994 Tarantino hit:

Adding to its prolific success, “Instant Search” resulted in 59% of viewers indicating positive purchase intent – significantly higher than the 37% credit card category norm. All of “Instant Search’s” previously mentioned positive traits drove exceptionally high metrics, beating out the norm across all traditional components with Attention and Likeability leading the charge:

Not everyone will be fortunate enough to have Carrie Underwood come knocking at their door with a gift in hand this season. But viewers were able to experience just that in “Holiday Magic,” along with a mini-performance of her holiday song “Favorite Time of Year.” Not surprisingly, the music stuck out as the best thing about this ad, featuring a song by none other than Underwood herself. This reaction was also evident in the emotional response towards the ad, where Audio scored at a Solid level: 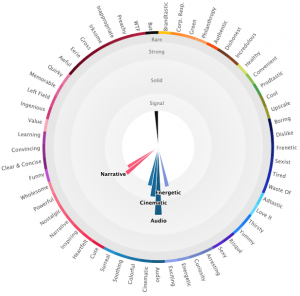 Although the scenes portrayed throughout the ad provided viewers with little Information regarding the product, the entertaining visuals along with the music broke through to viewers by scoring above the home security category norm on our Attention and Likeability scores.

Ryan Reynolds has a longstanding reputation of scoring laughs from viewers, and his headfirst dive into ad world this year has followed that same motif. Starring both Reynolds and Hugh Jackman, “Arguing” plays off of the ongoing, good-natured feud between the two celebrities. With the underlying ambition of selling more products through Sam’s Club this holiday season, Laughing Man coffee and Aviation Gin teamed up to promote their philanthropic causes. 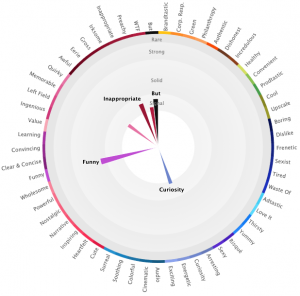 The heavy focus on a preexisting feud between the two stars lead to 45% of viewers selecting them as the Single Best Thing about the ad over the message (17% of viewers) and the brand (7%). Although the emotional profile above reveals that the levels of humor landed at a solid level, there was a missed opportunity to further emphasize the philanthropic messaging that was intended which would have been indicated by the Philanthropy emotion.

Snoop Dogg teaming up with a sea turtle may not be high on the list of people’s holiday expectations, but at least it’s for a worthy cause. The pair partnered with SodaStream to show off why their soda machines can be so good for people and the planet. Snoop and his CGI turtle friend evoked an abundance of positive emotions among viewers ranging from Arresting, due to the attention-grabbing visuals, to Green, derived from the ad’s ability to successfully convey the soda machine’s environmental-friendly attributes. 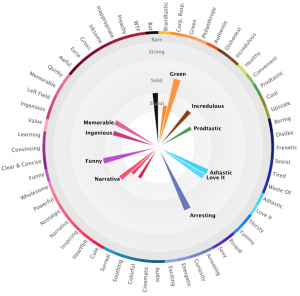 As a result, “The Small Things” ranked among the top ten small appliance ads of the past year for its Attention-grabbing abilities, Likeability, and Change and drove 59% of viewers to report positive purchase intent after watching.

Celebs With a Side of Cheer

Celebrities tend to be polarizing, as we’ve seen in the Super Bowl, and in regular advertising, because even the “most beloved” of celebrities still have their detractors. When delivered right, the optimal famous face can serve as a vessel for emotionally connecting with viewers to achieve the desired results. These holiday ads show that you can pair two actors who played the muscle for a criminal ring leader and bring all the nostalgic feels to viewers. The key to celebrity success has always been creatively pairing a star with a product that makes sense, like Ring and Carrie Underwood did. Fingers crossed that next year John McClane is selling us the latest in protective footwear. Oh wait.