Going for Emotional Impact with Your Super Bowl Ad? Here’s What Worked for Past Advertisers

Ah, the Super Bowl….where one moment you’re laughing, the next you’re fighting back tears and then, all of a sudden, your jaw drops to the floor. We’re talking about the commercial breaks, of course. Did you really think it was all about the game on Super Bowl Sunday?

The event sets the stage for brands to deliver the best advertising of the year. While there’s an endless number of creative approaches brands can take, all of them stem from the objective of making viewers feel something. Afterall, emotions in advertising help build relationships with consumers, influence long-term memory, and drive purchase intent. If a brand wants to make the most of their $5+ million investment, they need to consider the emotional impact of their ad.

Below, we analyzed ads from Super Bowls past that earned the highest score (10) for one of the following important game-day ad emotions we measure: Funny, Inspiring, Narrative (storytelling), WTF and Eerie. A 10 is the top possible score an ad can achieve when evoking an emotion. It can’t make a stronger impact than that, with very few ads connecting at this level.

Humor is the tried-and-true emotion on Super Bowl Sunday. Those ads that get it right benefit from strong Breakthrough (Attention & Likeability) and post-game buzz, as it’s a guarantee that everyone will bring up the funniest creatives.

In order to score a 100 for Funny, brands should not play it safe, but risk losing laughs with humor that tries too hard. The funniest Super Bowl ads cleverly combined elements of quirkiness and humor to stand out and make a lasting impression.

The heat map below highlights this as it shows viewers find these ads very Quirky, Ingenious and Memorable on top of Funny. For example, Audi gave us the previously unimaginable “Doberhuahua.” The odd cross breed could have taken away from the humor, but the brand tied in cultural phenomenons, like the notorious Sarah McLachlan ASPCA ads, and made this Super Bowl spot a hit. 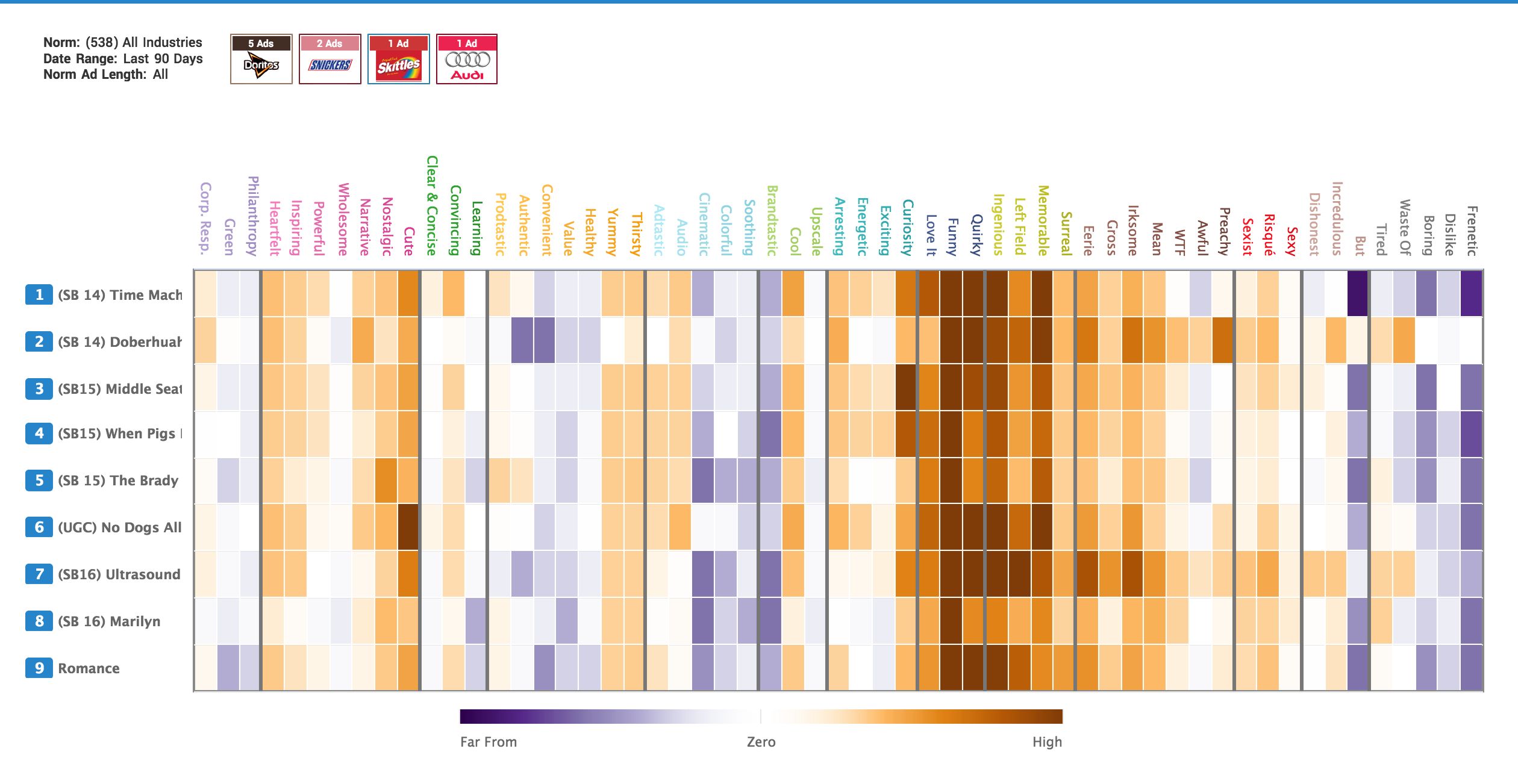 Two ads from Snickers star-studded “You’re Not You When You’re Hungry” campaign are among the funniest. Celebrities and humor seem go hand in hand during the big game. In fact, 70% of Super Bowl ads that feature a celebrity also go for humor.

Lastly, more than half of the funniest ads come from Doritos long-running crowdsourced “Crash the Super Bowl” campaign, suggesting that maybe humor is best left in the hands of the audience.

What’s more inspirational than watching your favorite player on your favorite football team compete for a career-defining championship? Some of the ads that roll in between plays! Capitalizing on the emotion behind the game gives brands a chance to tap into what viewers are already feeling. It’s one of the safer, more well-received emotions in advertising as it often leaves viewers feeling warm and fuzzy inside.

As demonstrated by Microsoft’s creative, the subject matter doesn’t have to be related to sports and athleticism. Inspiration can come from anywhere, but making sure viewers understand the connection between that inspiration and the brand is key. Microsoft’s 2014 spot “Empowering” demonstrated to viewers the positive impact technology has on our lives while seamlessly weaving in their products, like Skype, Surface and Windows. At the time, it had earned the second highest Ace Score ever (710) — pretty monumental if you ask us.

Most Inspiring Super Bowl Ads (since 2014)

Just because brands have the Super Bowl’s unmatched reach doesn’t guarantee Attention & resonance. Storytelling is a great way to keep viewers engaged throughout an ad, especially with longer form creative (1:00 & up).

Scoring a 100 takes more than having a good plot. Both of the best storytelling brands gave extreme attention to detail in order to craft the perfect story in each ad. Everything from the visuals, the music, the highs and lows of the story, and even the characters were carefully selected.

Our WTF emotion signals when the message is confusing, or when there’s no connection between the ad and the brand advertised, leaving viewers with that “WTF did I just watch?” reaction. You might think who would want that, but some brands knowingly go this route for the Super Bowl. They forego classic campaign metrics in order to make a statement, wow with cinematic visuals or both. As was the case for 84 Lumber, a WTF reaction can generate a lot of buzz around an ad — but not necessarily positive buzz.

Similar to brands that hit on our WTF measure, ads that score high on Eerie are looking for Attention through non-traditional means. No surprise here, Mountain Dew’s “PuppyMonkeyBaby” is the only Super Bowl ad to score a 10 on our Eerie emo, which is evoked when an ad makes viewers uneasy or scared, often as the result of weird content. Eerie can earn a lot of Attention during and after the game, particularly on social media where it could have meme potential. If an ad scores a 100 on this metric, the brand is definitely using the stage to entertain and perhaps, win a Cannes Lion later in the year.

Funny, Inspiring, Storytelling, WTF, and Eerie ads are all sure to air during the Super Bowl, but will any of them score a 10 on one of those emotions? Stay tuned to find out. We will be live tweeting scores and insights from the Super Bowl ads as they air. Make sure to follow us @Ace_Metrix on game day.