Four Ways Advertising in the Super Bowl Has Changed

For the last five Super Bowls, we’ve taken a look back at our data to see how the biggest advertising game of the year has changed over time. Despite a rather lackluster sporting event out on the field, the real game—the one in between the plays—was strong. Brands brought their A-game; and while not every brand walked away a winner, they each had their moment of fame as some 111 million Americans watched in anticipation.

Looking at our fields of data, we’ve extracted four main points that show how advertising during the Super Bowl is evolving and advertisers need to be prepared and well-informed if they are going to make that investment.

1. The bar has been raised—Super Bowl ads are becoming more effective.

The average Ace Score of ads this year was up 4% compared to last year’s average. The most effective ads scored higher and the least effective scored higher as well. Microsoft’s “Empowering” earned an Ace Score of 710, the second highest Ace Score in our entire database of 30,000+ ads. GoDaddy.com brought up the rear with “Bodybuilder”, however, their ad still scored a 432, which is 19% better than the bottom spot in 2013. Fewer miscues, longer and more engaging story-telling, less polarity and better risk management are pushing scores higher in the game. 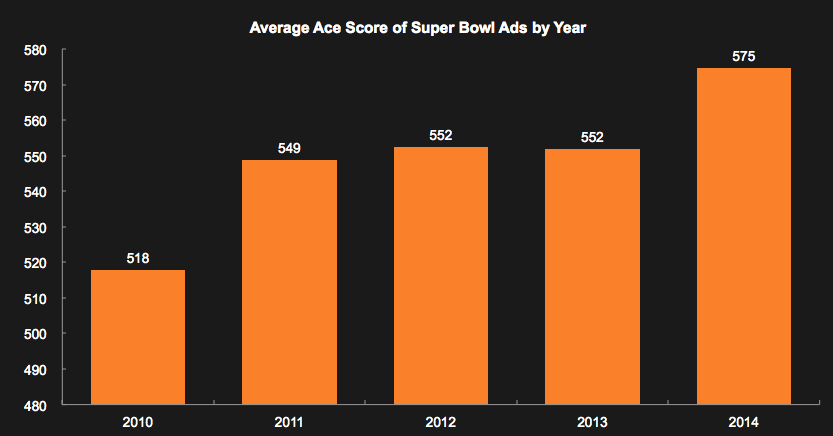 2. Place your bets on babies rather than celebrities or envelope-pushing jokes.

Humor is the go-to strategy for two-thirds of the ads in the game every year. However, our data suggests that each year, ads with babies or kids had more success. Likewise, brands who used celebrities or sex appeal (or sometimes both) under-performed when compared to the average. It is notable, that we saw less “sexy” this year – and the scores reflected that. 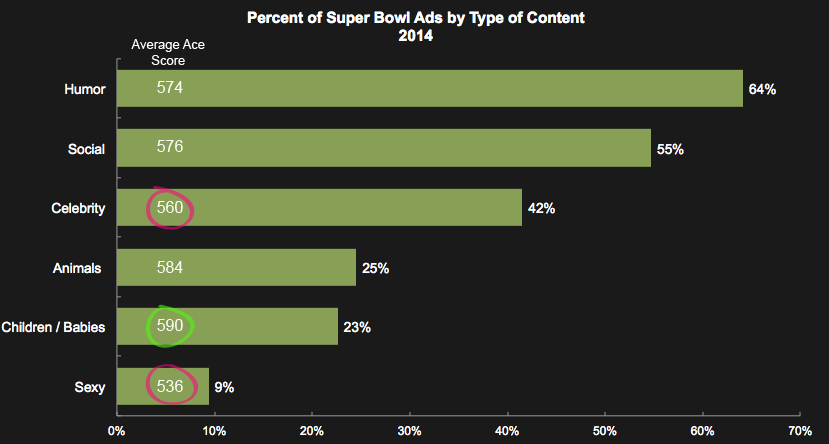 3. The long and the short of the spots.

In 2010, five years ago, 18% of the ads were :60 or longer; whereas this year, a whopping 42% of the 53 ads were :60 or longer. The longest ad of the game was Chrysler’s 2-minute “Made Here” saga featuring Bob Dylan. Conversely, Geico aired the short and clever :15 spot, “Pig’s Photo” – notably not a new ad for the brand and likely a last-minute bargain basement media buy. Wonderful Pistachios attempted to use their estimated $4 million spot wisely, splitting their time for a more dramatic impact. The trend toward more airtime means more time to tell a story, which often means higher Ace Scores. 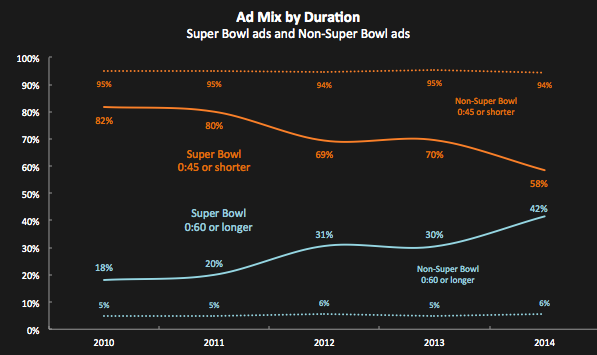 Were there some funny ads during the last Super Bowl? Absolutely. In fact, about two-thirds of ads attempted some form of humor, consistent with previous years. Nevertheless, on average, the ads were less funny this year. This Super Bowl’s Funny Index (a propriety algorithm that measures the funniness of an ad based on consumer reactions) was 19% lower than the average Funny Index from the 2013 Super Bowl. Granted, from the looks of things, last year’s big game was particularly side-splitting; however, with an average Funny Index of 259, this last Super Bowl was less funny than any of the previous three year’s games. It seems as though brands, instead of going for huge laughs, are being more calculated and clever when incorporating humor into their brand’s big story.

Read blog post Were You Looking For A Laugh During the Big Game? > 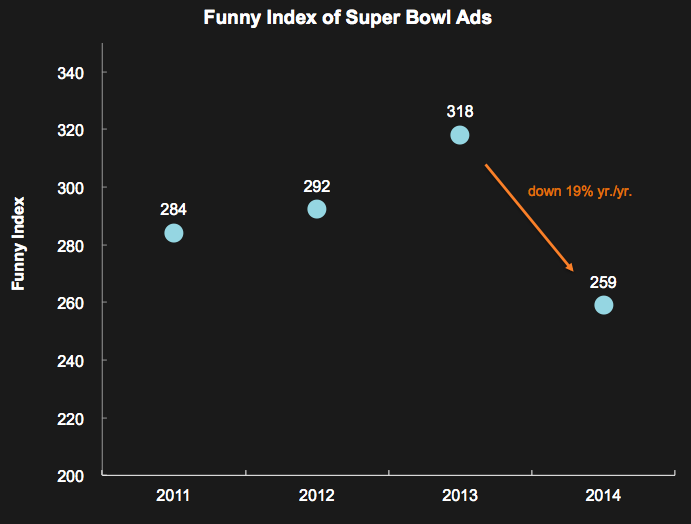 With so much data on hand, advertisers are getting smarter about how to play to the large audience that is the Super Bowl crowd. There are still insights, however, to unearth from the individual ads. Now, as some advertisers are re-purposing their big game spot for digital or traditional programming, they should know which spots play best for which demographics and how they can amplify their :15, :30, :60+ seconds of fame for a big payoff.

This is but a glimpse of what we covered in the Post Game Huddle – a webinar we held for the advertising community. If you missed it, fret not. Download the report or contact us to schedule your own Post Game Huddle. You can also watch a video presentation of the webinar given by Ace Metrix Marketing EVP Jonathan Symonds.

Watch the ads and see the scores for these most recent Super Bowls.