Michael Jordan signed a 10-year contract with Gatorade to become its first, and only, endorser in 1991. The ad “Be Like Mike” debuted that summer after the Chicago Bulls and Jordan won their first championship, becoming a cultural phenomenon. Continuing an already strong growth trend, one year after the campaign’s debut, Gatorade’s annual revenues increased from $681 million to over $1 billion (Turner, 2007, p. 197; originally from Andrews and McDonald, 2001, p. 20). The “Be Like Mike” campaign forever changed the perceived impact that a celebrity athlete could make on a brand.

Twenty-three years later, as part of its 50th anniversary celebration, Gatorade has launched a re-mastered version of the ad. Curious as to how the famous campaign stood the test of time, we had 500+ consumers watch and rate the original (non-re-mastered) “Be Like Mike.”

As seen in the Ad Personality Chart, below, “Be Like Mike” is one of the most likeable ads in the entire database. As expected, the ad not only grabs viewer attention, but also generates a strong product desire, which is achieved without a heavy product focus.

Furthering the notion of how likeable the ad is, Emotional Sentiment for the ad is highly positive. The ad earned a score of 75 out of 100, which is 36% higher than the Gatorade norm.

So, what about aspects of the ad generated such positive vibes? Let’s see what the viewers had to say: 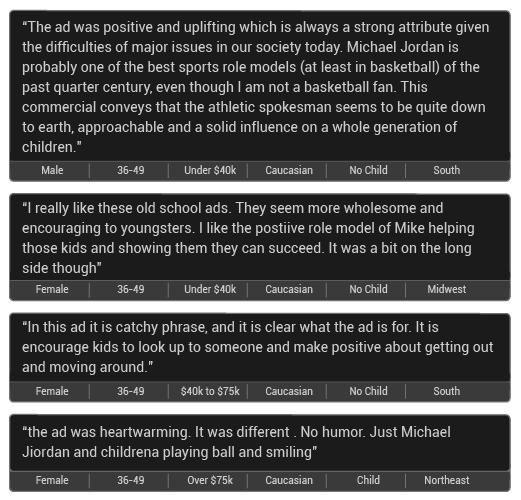 To summarize these and other verbatim responses, viewers enjoyed the positive message, featuring a strong role model for kids, and simply having fun while exercising, which has coincidentally become increasingly important in modern society.

From a creative perspective, “Be Like Mike” had something for everyone, which is evident based on the well-balanced responses to what the best thing was about the ad. Seen in the chart below, the characters were most often selected, but shortly following were the Gatorade brand and product, visual scenes and music. 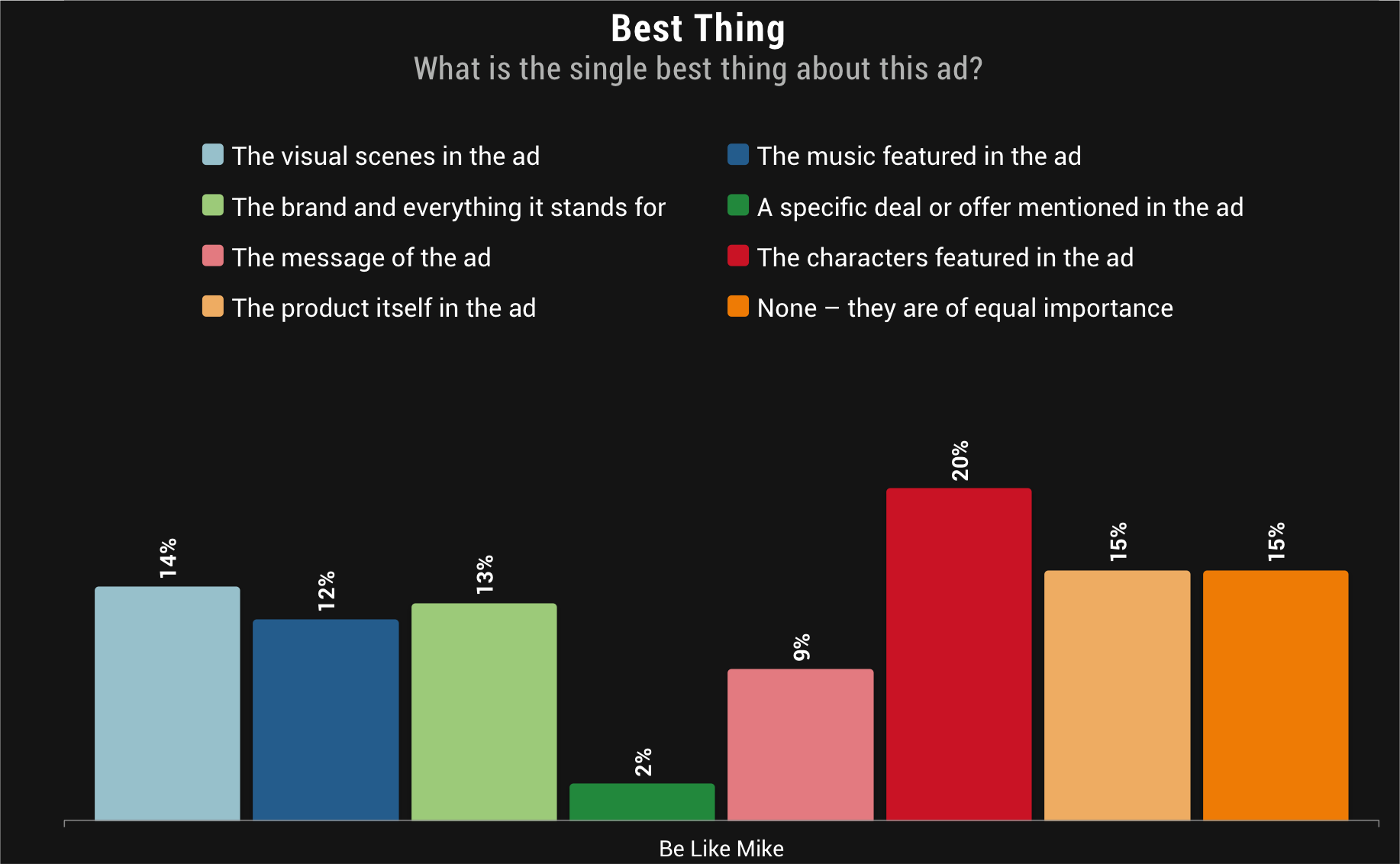 While it is encouraging to see that viewers reacted positively to the ad itself, it is important to consider if its re-emergence will impact the Gatorade business and fit with how the brand has changed in the past 23 years. When asked if the brand still reflects the ideas and values presented in “Be Like Mike,” roughly 7 out of 10 viewers responded that it does “a lot,” with nearly all other viewers at saying “a little.” This strong response indicates that “Be Like Mike” should feel natural and complementary to other Gatorade campaigns. 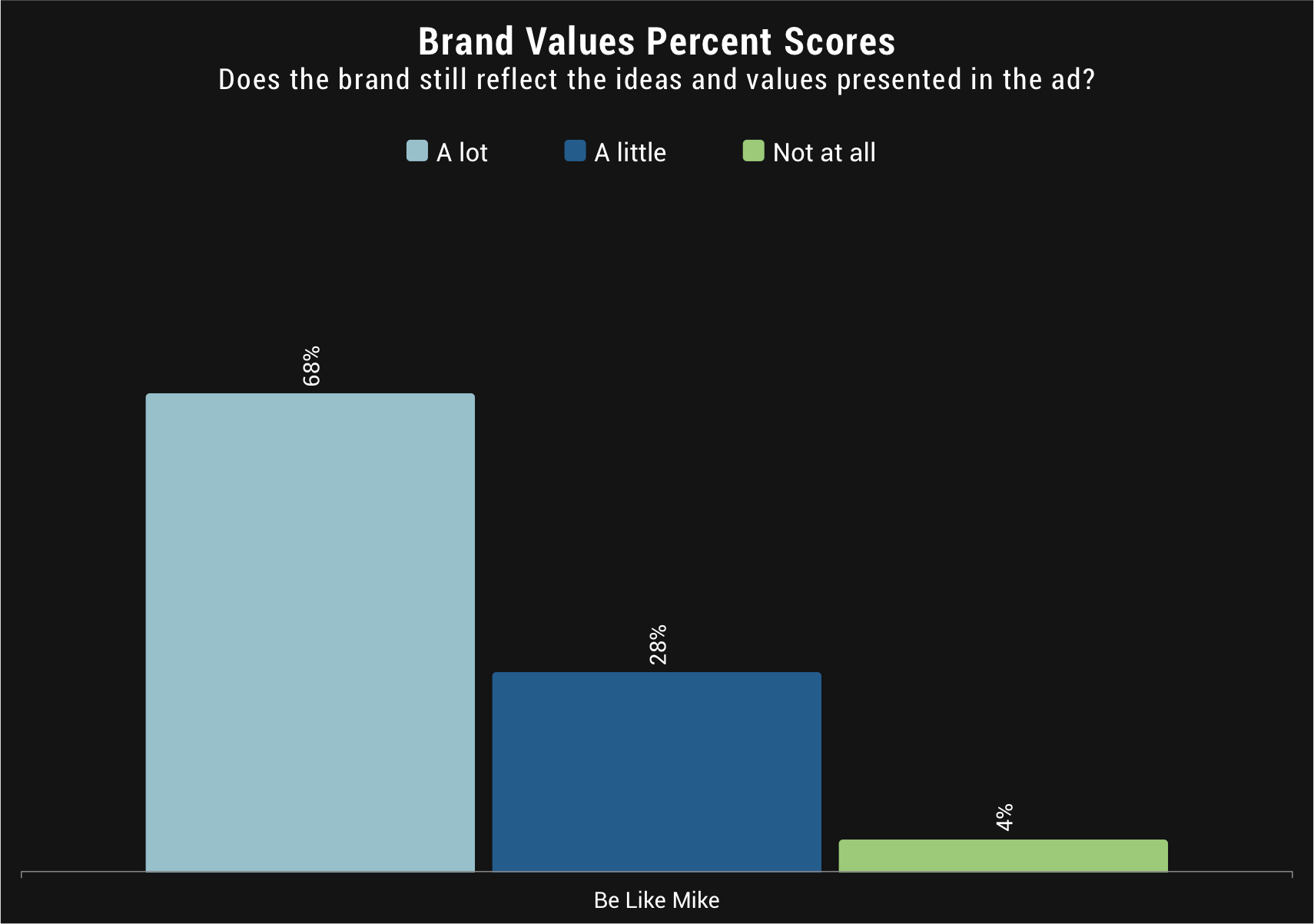 While advertisers have utilized nostalgia marketing in the recent past by tapping into icons, slogans and jingles, Gatorade’s wholesale re-launch of a historic campaign will likely serve as a tactic for advertisers to come. Here are some final thoughts from viewers on the bringing back nostalgic creative: 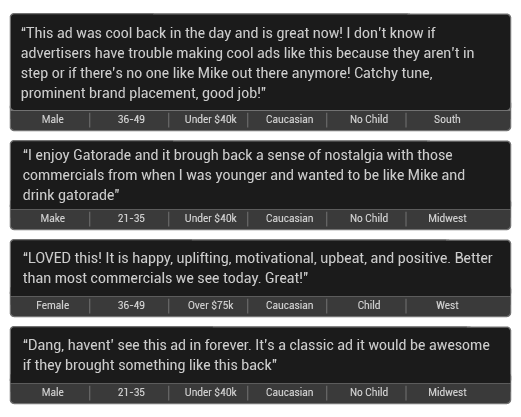